What is Chelsea Manning’s best chance of getting into Canada? 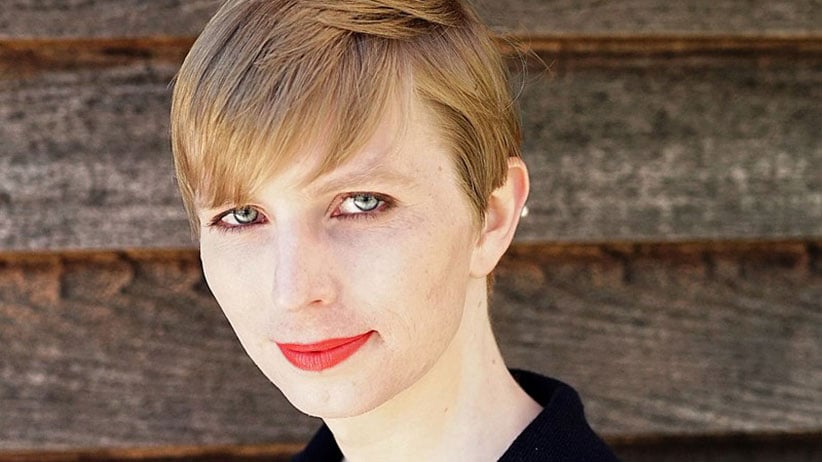 Every day, an American citizen with a criminal record is permitted to enter Canada. Then again, it’s safe to assume that, every day, an American will be denied entry to Canada because of a previous conviction. What would you expect when 30,000-plus Americans were turned away at the Canadian border last year?

Last week, Chelsea Manning tried her luck at the Saint-Bernard-de-Lacolle border in Quebec, but was denied entry. Normally, this would go unnoticed, except the former U.S. intelligence analyst, who famously leaked a trove of classified material made an issue of it by posting her rejection letter on Twitter. 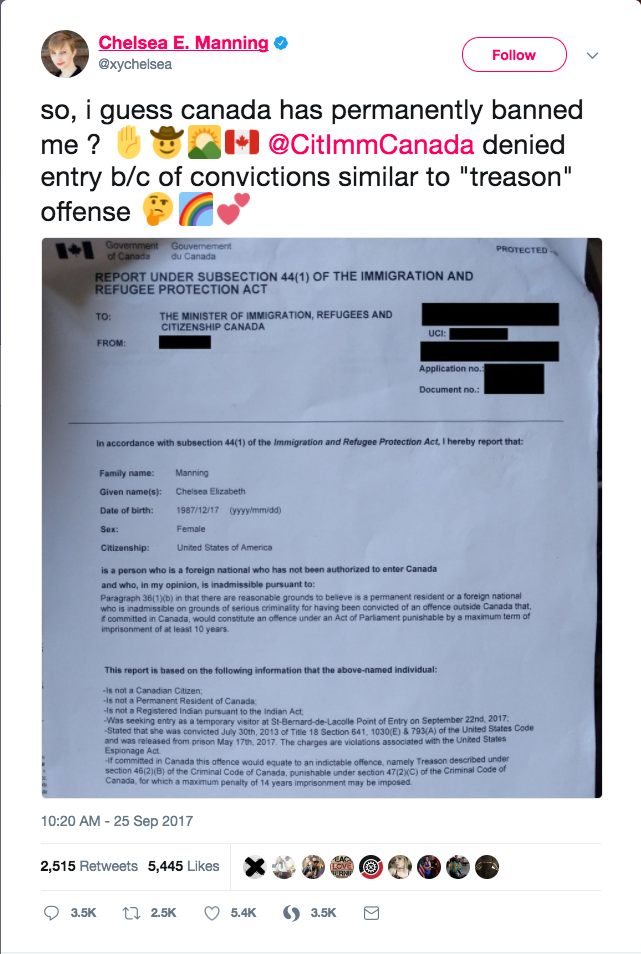 Manning is one of America’s most polarizing figures: a hero to some for her whistleblowing (and promotion of transgender rights), whom others consider a traitor to her nation.

Back in 2003, when she had not begun her transition and was known as Bradley Manning, she leaked hundreds of thousands of confidential—in many cases classified—U.S. military documents to WikiLeaks. She was convicted for various crimes under the U.S. Espionage Act and received a 35-year prison sentence. Then, days before his final term in the Oval Office ended, former President Barack Obama cut her time in jail short by commuting her sentence. She’d been inside for seven years.

But even with her commutation, Manning remains a convicted felon.

“It’s not surprising that she got rejected at the border,” says Christian Leuprecht, a political science professor at the Royal Military College of Canada and Queen’s University. “The case [against Manning] is pretty clear cut. Any other American with a criminal conviction that has an equivalent offence in Canada would have been rejected.”

Nonetheless, Manning said she will challenge her denial of entry at a Canadian admissibility hearing, which bodes the question: What is Chelsea Manning’s best chance of getting into Canada?

For Leuprecht, that chance could fall to the fact that she was denied for her previous conviction that “if committed in Canada this offense would equate to an indictable offense, namely Treason described under section 46(2)(B) of the Criminal Code of Canada”—so said the paperwork Manning tweeted.

“What makes her inadmissibility appealable is that nobody in recent history in Canada has been charged, let alone convicted, of treason,” says Leuprecht. “That might be interesting for a defence lawyer who wants to have a challenge in front of the Supreme Court: can you actually deem someone inadmissible under an offence that has effectively never been operationalized in modern Canadian history?”

The list of Canadians convicted of treason is small, though it contains notable names like Louis Riel, the Métis leader of the North-West rebellion, who was executed in 1885.

But for decades, no Canadian has been charged with treason—not even Jeffrey Delisle, the Halifax Navy intelligence officer who in 2012 pleaded guilty for selling top-secret information to Russia.

As such, Manning could argue that treason is one among many antiquated Canadian laws.

“If I were her, I’d hire a lawyer and say ‘who was the last person convicted of treason in Canada?’” Leuprecht stays. “Is this actually an indictable offence?”

Then again, treason is still in Criminal Code, even if experts can’t remember when the last time anyone has been convicted of it. “The fact that it hasn’t been utilized doesn’t mean it’s not the law,” says Lorne Waldman, a Toronto-based immigration lawyer. “I don’t think the fact that no one has been charged with treason would be successful grounds for challenge her admissibility.”

However, Waldman says a lawyer could still make a challenge at the admissibility hearing by saying Manning didn’t get a fair trial in America. “You could argue the conviction was based on an unfair process: it was a military [trial] and politicized,” he says. “I assume she may retain a lawyer and that’s the approach I would suggest.”

All the while, there’ve been those quick to rise to Manning’s defence, among then NDP leadership candidate Niki Ashton, who wrote on Twitter that the “government must fix this and allow her in our country.”

Unacceptable to see @xychelsea unable to enter Canada. The government must fix this and allow her in our country. #cdnpoli https://t.co/5qp1ou82pF

The simplest way for that would be for Manning to apply for a temporary resident permit, which might be granted by the immigration minister, Ahmed Hussen. Or Manning could apply for “rehabilitation approval” to overcome her inadmissibility, though this option is only available once she waits five years after her sentence was completed, in this case 2022.

“I hear what Niki Ashton is saying, but of all things the immigration minister has to worry about, allowing Chelsea Manning to come into Canada just to visit is at the top of his list,” Waldman says.

Correction: This article previously stated Chelsea Manning tried crossing the border on Monday. In an interview with Reuters, Manning said she attempted to cross last week.