What is Jason Kenney's 'energy war room' good for?

Chris Turner: The crack unit tasked with pushing back 'lies' about the oil sands is so far trading in shop-worn spin and conspiracy theories 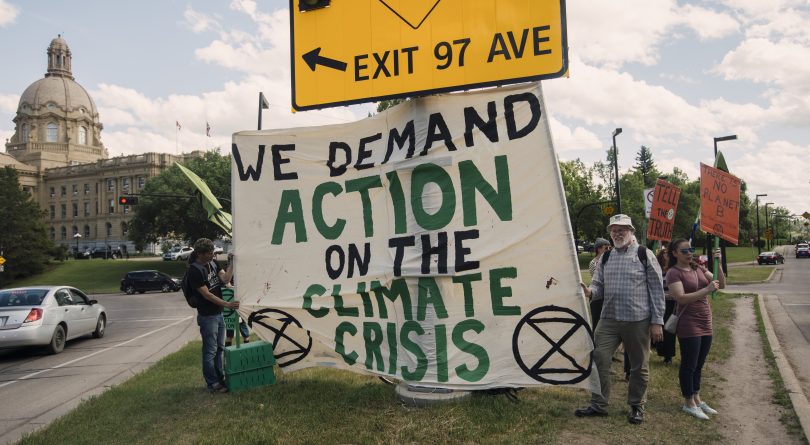 A protest outside the Alberta legislature, organized by Extinction Rebellion, in response to Alberta climate policy and the federal approval of the Trans Mountain Pipeline (Amber Bracken/CP)

Chris Turner is a Calgary-based writer who focuses on energy and climate change. His latest book is The Patch: The People, Pipelines, and Politics of the Oil Sands

When Jason Kenney was on the campaign trail—where he spent most of the last three years—he repeatedly vowed to change the entire story of Alberta’s oil and gas industry. He would create a “fully staffed, rapid response war room” and place it under unwavering orders to “effectively rebut every lie told by the green left.” True to his word, he has wasted little time as premier before taking action.

In early June, as a pro-industry rally gathered thousands outside a Calgary oil industry conference and the Senate debated the merits of an oil tanker ban, Kenney officially launched his Energy War Room. By the end of the summer, he said, the war room would have a permanent office in Calgary, a full-time staff of government employees, the freedom to bring in outside contractors, and a budget of $30 million (paid for in part by revenues from the emissions levy his government was bringing in to replace the carbon tax – an elegant touch).

In fact, the war room was already on the case. The Alberta government had just launched a $3-million campaign to lobby in favour of the Trans Mountain pipeline expansion, consisting of websites, social media accounts, and targeted display advertising in Ottawa, where a heretofore pipeline-loathing MP just might pass by and find enlightenment. (Early days and a modest budget, to be sure, but perhaps such a campaign could convince even a Liberal government so fully of the pipeline’s merits that it would purchase the project outright and then approve it for a second time at the next available opportunity. Dare to dream.)

If that sounds like typical government communications work, Kenney made it clear his war room would be like nothing that had come before it. “Government communications are by nature a little bureaucratic and tend to be a bit slow-moving and risk averse,” he explained, as only a man whose entire working life has been spent in and around government can. “And so some of the groups behind me here are able to respond in social media in real time, where it sometimes takes hours if not days to get a message approved through a conventional government bureaucracy. The energy war room will have a mandate to operate much more nimbly and much more quickly, with a higher risk tolerance, quite frankly, than is normally the case for government communication.”

Ah, yes, those groups behind him there. Kenney was flanked at the podium by a gang of oil industry boosters, ranging from the head of the Canadian Association of Petroleum Producers to the founder of the grassroots I LOVE OIL SANDS campaign. And though Kenney never mentioned Ezra Levant by name, he spent a few minutes rehashing the core argument of Levant’s 2011 book, Ethical Oil, which is that Alberta’s oil should be in higher demand in the global marketplace because Canada’s human rights record is a good deal better than those of Venezuela, Russia, and Saudi Arabia. (Kenney referred to them in turn as “the socialist dictatorship in Venezuela,” “Vladimir Putin’s Russian autocracy” and “OPEC dictatorships.”) You can tell what a buzzer-beating slam dunk the ethical oil argument is because Kenney and his colleagues, first in Stephen Harper’s government and then in Alberta’s opposition, have been mashing it into their every statement about Canadian energy since Levant’s book came out; eight years later the case has been so unequivocally made that Alberta needs a $30-million war room to make that case some more.

But never mind that. That was before the war room, and before those groups up there with Kenney were brought together to “tell the truth” in the face of what he called the “broader campaign” being waged against Alberta’s oil and gas business. This was our first look at the war room’s truth-telling strategy. And if it provides any clues regarding its operation, Alberta’s oil and gas sector will soon be in extraordinary hands. It might well be the emergence of the first-ever government by Facebook comments section.

Consider the war room launch’s optics. The first face to greet the cameras was that of Robbie Picard, a long-serving oil sands booster based in Fort McMurray, who had been given the podium to introduce the premier. Picard helped found the I LOVE OIL SANDS campaign as well as a grassroots group called Oil Sands Strong, and he is an occasional commentator on Ezra Levant’s Rebel Media. The primary knock on Picard in such circles is that he might be a bit too enthusiastic in his cheerleading—he was tossed from his own I LOVE OIL SANDS group back in 2016 for posting a Facebook meme of two women kissing to explain why Canada’s oil is more ethical than Saudi Arabia’s. If this sounds to you like Drake throwing someone out of the Raptors fan club for chirping too hard at a game, I wouldn’t discourage that comparison.

Soon after Picard passed the mic to Kenney, the premier name-checked Vivian Krause, the woman smiling over his right shoulder. Krause is a researcher-reporter who works the self-assigned beat of who donates money to Canadian environmental groups. On it, she’s discovered that a portion of that money comes from a handful of deep-pocketed American charitable foundations—the Tides Foundation and the Rockefeller Foundation, in particular—and that these groups are also donors to an American activist group called CorpEthics. These are well-documented facts and form the basis of Krause’s claims to independent, unbiased research. The story she builds out of those financial transactions, however, is far less substantiated.

You see, CorpEthics once held a meeting, attended by a couple of Canadian environmental groups, under the banner of the “Tar Sands Campaign,” where landlocking Alberta’s bitumen was the focus of the discussion. This happened in 2008. Krause’s argument is that CorpEthics has orchestrated the bulk of the opposition to the oil sands and the pipelines that carry it ever since. She’s remained steadfast in that belief even though the donations that represent her smoking gun are a tiny fraction of the total budgets of those environmental organizations and there is no evidence that the Tar Sands Campaign ever existed as anything more than a loose network of cooperation among Canadian environmental groups already working on campaigns opposing expansion of the oil sands. In a recent tweet, Krause even referred darkly to a “Rockefeller election machine” that was guiding Justin Trudeau’s policymaking in the direction of crippling the oil industry. Perhaps this “machine” is an electric vehicle with limited range, because there is no evidence that it has ever entered Canada, let alone turned the prime minister into a Manchurian candidate for the Rockefellers.

RELATED: The complicated history of building pipelines in Canada

This would all be social media bunfight fodder, but for the fact that there was Krause on stage at the launch as Kenney placed her arguments front and centre in the war room’s mission. Kenney praised her “cutting edge and frankly brave research to throw a spotlight on the foreign-funded campaign of defamation against Canada’s energy industry.” And he spoke scornfully of “activists from the Tar Sands Campaign” who had “helped to write” the federal government’s proposed oil and gas regulations. A critical war room mission, the premier explained, would be to “proactively tell the truth” in response to this coordinated campaign Krause claims to have uncovered.

So what might be the point of such diligently proactive truth-telling? After all, it would be hard to argue that the problem with previous Alberta governments was insufficient willingness to wave pom-poms and spin batons for the oil sands business. Over the years, Klein populists and Notley social democrats alike have spent millions upon millions on everything from billboards in Times Square and Piccadilly Circus to an oil sands truck display on the Mall in Washington, D.C.—all to little evident effect. And in case it’s not yet abundantly clear, let me reiterate that if the conspiracy arguments of Krause and the ethical oil appeals of Levant and the oil sands boosterism of Picard were wickedly effective communications strategies, there would be no need for the war room in 2019. There was barely a single phrase spoken by Kenney at the launch that hadn’t been used and reused, spat at Trudeau during Question Period or placed in an open letter under Joe Oliver’s signature. It was more like a Harper cabinet greatest hits show with a Facebook post for an opening act.

It’s hard to imagine a politician as legendarily savvy as Jason Kenney thinking this is $30 million well spent toward his stated goal, which is among other things to woo “international investors” back to Alberta’s oil patch. He can’t really believe that capital fled Fort McMurray not because of volatile prices and mounting long-term risks but because the likes of ConocoPhillips and Devon Energy just didn’t realize that pipeline opposition had American charity money on its balance sheets.

So what is the real mission for Kenney’s war room? It could be that it is merely a balm to his base—a long-time promise kept, a highly visible way to “stand up” for the industry in ways that Notley banning B.C. wine somehow wasn’t. Or it might be a way to generate anti-Trudeau communications on the energy file at will from now until federal election day. The most troubling possibility, in any case, remains that it is what it claims to be. Which would mean that the premier of Alberta truly believes that more of the same ferociously partisan messaging and relentless boosterism that helped turn Alberta’s bitumen into the planet’s most hotly controversial oil patch will somehow win back investors and sway Canadians not already planning to vote Conservative in October.

This would all be pure political theatre—and worthy of little more than a chuckle—if not for the very real stakes in the debate. After Robbie Picard held up a printout of a crude Facebook meme of environmental activist Tzeporah Berman and Kenney badmouthed her in his remarks, she came under an immediate barrage of death threats and abuse. Alberta’s oil sands continue to be the largest source of new greenhouse gas emissions—badly in need not of better memes but of smarter technology to shrink their carbon footprint and make a real case for their inclusion in a global energy industry that will not look like the one just past, no matter how many people follow @YesToTMX on Twitter.

Meanwhile, the capital flows away elsewhere—not because the responses to industry criticism weren’t rapid enough, but because the managers of billion-dollar funds can’t afford to indulge dark innuendo like that Vivian Krause spins about the Rockefellers.