What needs to happen to the weather to help Fort McMurray?

A Q&A with a scientist who specializes in forest fires, on what needs to happen for the Fort McMurray fires to go out 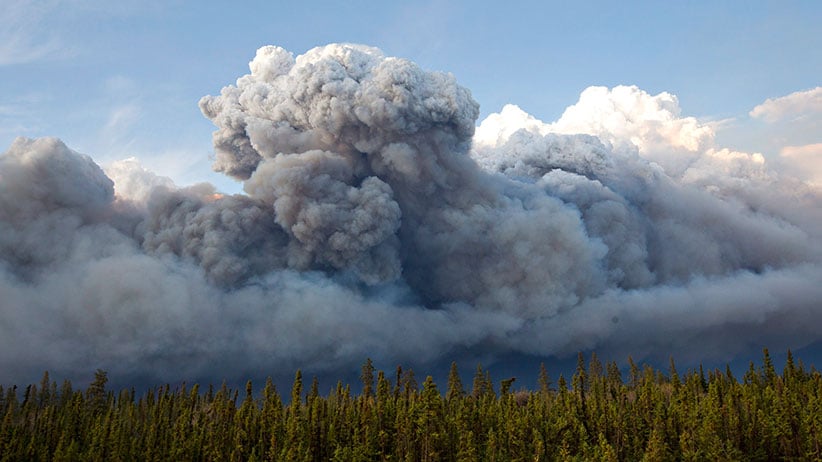 Smoke rises above trees as a wildfire burns in Fort McMurray, Alta., on Wednesday May 4, 2016. The wildfire has already torched 1,600 structures in the evacuated oil hub of Fort McMurray and is poised to renew its attack in another day of scorching heat and strong winds. (Jason Franson/CP)

As hundreds of firefighters battle in and around Fort McMurray, everyone is carefully monitoring the weather in the hopes that Mother Nature will come to the rescue. Right now, there’s no way for firefighters to put out the fire unless the weather shifts. Dr. Kerry Anderson, a research scientist with the Canadian Forest Service in Edmonton, specializes in research on forest fires. He explains how the weather could help, or hurt, fire fighting efforts.

Q: What needs to change in the weather for the fire to go out?

Q: How much does the temperature need to drop? How cold does it need to get?

Q: If there’s rain, or just the clouds by themselves?

A: I have not talked about rain. Obviously rain is an important factor here. If it rains that would have a great impact on the potential fire behaviour, but it takes a lot more than just a little sprinkling to put these fires out. A fire such as this Fort MacMurray fire is going to need 50 mm or 100 mm of rain to put it out, so that’s really not in the forecast, not for the next few weeks.

Q: Is there a temperature drop forecasted?

A: With this cold front that came through last night the temperatures in Alberta have dropped quite dramatically, we’re perhaps five or more degrees cooler than we were yesterday and along with this cooler temperature the humidity went up so we are getting a bit of a break in terms of the potential fire behaviour. But the indication is that’s going to be short-lived and things are probably going to ramp up again early next week.

A: No, there has been weather modification done in the past but a lot of that stuff is on shaky ground. That was work that was done in the ’70s and ’80s. [Cloud seeding] is not a science that’s really being pursued aggressively these days.