From heroism to incompetence, the Canadian officers that William Nicholson painted stand in for the full range of wartime experience 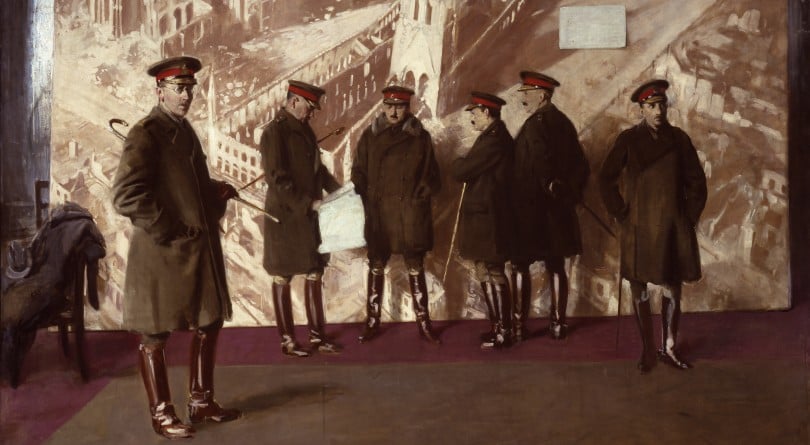 Just a little below dead centre of Canadian Headquarters Staff—a moody group portrait hanging in the Canadian War Museum in Ottawa—the left sleeve of an officer with downcast eyes hangs empty. It’s tucked discreetly into his coat pocket, though, so only on close inspection does the painting give up this touch of pathos.

The amputee is Harold McDonald, who was just 32 years old when they made him a brigadier-general in 1917. Terribly wounded at Ypres in April 1915, McDonald was dragged to safety by Dr. Francis Scrimger, who covered McDonald with his own body as shells exploded and shrapnel flew. Dr. Scrim, as they called him, won the Victoria Cross, and served out the war as a surgeon. McDonald ended up in London at HQ, and thus in Sir William Nicholson’s frame.

Nicholson was an established English artist of the era. In his Canadian commission, he depicts six officers as if caught just a moment before they formally pose, looking more resigned than resolute. He began painting it in 1917, but didn’t finish until after the armistice, in 1919 or even 1920. Once you learn that Nicholson received news of his own son’s death in action while he was at work on this huge canvass, more than two metres by nearly three, it’s impossible not to imagine his own sadness washing across it.

A photo taken in Nicholson’s studio shows that the Canadians, in fact, posed against a plain white screen. The enormous aerial photograph of the bombed Ypres Cathedral and Cloth Hall they’re shown standing in front of is Nicholson’s own audacious invention. Those looming colourless ruins effectively explain their sloped shoulders and drained expressions. What more do you need to feel with them how long the destruction has dragged on?

READ MORE: The little-known WWII works of one of Canada’s most famous artists

Still, I’ve long admired the painting, and grown curious about their particular stories. So I read up on the officers for the 100th anniversary of the end of World War I. I hadn’t even noticed McDonald’s limp sleeve before. And I didn’t know that Lt.-Gen. Sir Richard Turner, who gazes blankly out at the far left, was a Boer War hero, who, despite acknowledged personal bravery, turned out to be one of those notorious Great War generals whose incompetence cost many soldiers their lives in the trenches.

About Turner’s part in the awful fighting at Ypres in April 1915, the peerless war historian Tim Cook has written, “Faced with a bewildering array of conflicting reports, Turner proved here, and later, that he was incapable of deciphering the true situation at the front.”

But the war didn’t only expose such failings. That general attending to his paperwork is Alexander McRae, a prime example of early 20th-century gumption. McRae hustled his way to pre-war fortunes in everything from Saskatchewan land speculation to British Columbia logging. In uniform, he ran military supply and service operations like the shrewd businessman he was. He later played at Tory politics, and donated his pillared Vancouver mansion, during World War II, to be a hospital for wounded veterans.

Facing McCrae, in profile, is Maj. Furry Ferguson Montague. They called him “Ray” and his life seemed charmed. Son of a doctor, he received an elite private-school education and quarterbacked the University of Toronto Varsity Blues to the 1905 football championship. By the time Nicholson set to work, Montague was serving under Lord Beaverbrook in the Ministry of Information. After the war, he was a lawyer in Winnipeg.

Next to him is Maj.-Gen. G. L. Foster, a Nova Scotian doctor, who rose quickly to become a top battlefield physician. He must have seen agony beyond description. But Library and Archives Canada also preserves Foster’s typed memo from Nov. 11, 1915, in which he reports on talking with a soldier who never took his boots off through an entire tour at the front. Foster urges “frequent change of socks and removal of boots once every 12 hours.” Trench foot—that was also World War I.

At the far right, the compact figure who looks rather distracted is Maj-Gen. P.E. Thacker. As Turner’s “adjutant general,” Thacker was effectively the top Canadian administrative officer, and a diligent writer of reports. For instance, he studied the organization of reserve units, and found they were not properly set up to deliver reinforcements as the war’s ghastly toll mounted. Carnage requires someone to make calculations.

It’s all here. Young bodies smashed, old ways of generalship proven disastrously outmoded. Scope for one man’s ambition, while many more long only for dry feet. Loss that’s particular, but also statistical. None of this, of course, is explicit. It’s not even implied. But once I’d read a little about the six HQ staff officers, I looked again, and found that Nicholson’s masterpiece seemed to contain all these details and much more besides.

The war ended a century ago. With every Remembrance Day, our distance from those who lived it grows longer. Even the finest works of war art, or the deepest pages of war literature, can’t pretend to replace living memory. But they can remind us how potent proximity to those individual vessels of experience can be. In Canadian Headquarters Staff, there they stand.