What the 'lavender scare' tells us about Pride and its future

As Toronto Pride asks police not to participate in this year's parade, the fraught past—including the RCMP's 'fruit machine'—offers cautionary lessons 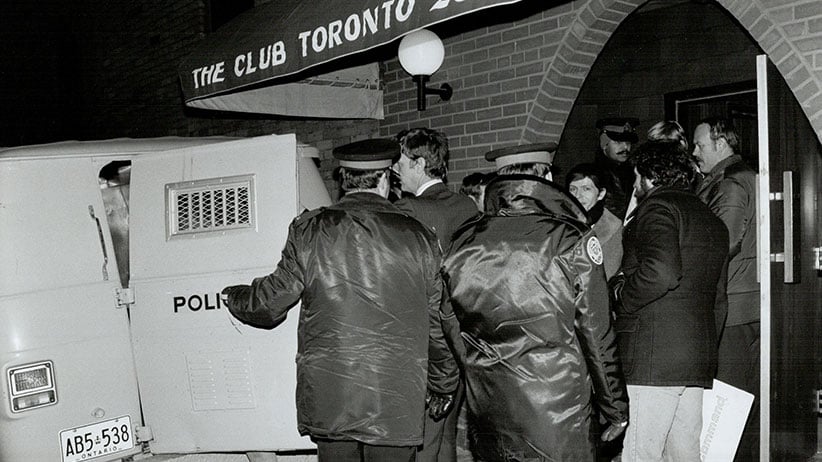 Last week, Toronto City Council chose to maintain funding for the Pride parade, the show-stopper event that caps off a month-long celebration of queer identities that begins every year on June 1. The threat to withdraw funding came in response to the organizers’ decision to ask police officers not to dress in uniform, in solidarity with Black Lives Matter. Although the 27-17 vote doesn’t quite qualify as “close,” the fact that 17 out of 44 elected municipal officials voted to withdraw the funds is surely too close for comfort for many.

Those who wanted to defund Pride invoked inclusivity, seemingly unaware of any irony. Those who defended Pride pointed to its history of resistance, specifically to police harassment and abuse, which had hit crisis levels in the late 1970s and early 1980s, the most well-known incident of which was the brutal 1981 raid of four Toronto bath houses, provoking protests and, ultimately, public support for gay rights.

These raids, however, weren’t an anomalous rogue crackdown in which good cops went too far. Instead, it was the consequence of a dead-cat bounce of McCarthy-ish policies that imposed a closet on queer Canadians by forcing individuals to hide their sexual identities for fear of reprisals. And it happened, in part, because the actions of one Russian who, in 1945, was working at the Soviet embassy in Canada when he defected, finally making it clear to the authorities and, soon after, the public, that the lines had been drawn and Soviet spying was real—an act that arguably sparked the Cold War.

The Gouzenko Affair began when Igor Gouzenko walked out of the embassy with more than 100 incriminating documents under his arm, some of which detailed Joseph Stalin’s espionage activities, including designs to steal nuclear technology from the west. In a crazy dramatic twist, however, Gouzenko’s whistle-blowing nearly failed, since the RCMP initially didn’t believe he really had the goods and sent him home, forcing him and his family to hide in a neighbour’s place, as Soviet agents tossed his apartment next door, searching for the stolen documents. Hiding and secrecy became a Gouzenko trademark, and he was often photographed and interviewed in a rudimentary mask, apparently made from a pillowcase.

Gouzenko’s papers revealed the presence of a Russian spy ring in Canada, 18 of whom were ultimately convicted; it prompted Canada to implement policies meant to shore up security. One of the highest-priority of these were measures to contain the “lavender scare”, referring to gay men and lesbians in the military and civil service, who were considered a serious risk; while there is simply no relation between queer identities and communist sympathies, the lavender scare was based in the concern that gay men and lesbians could be targeted in kompromat blackmail schemes and turned into assets. This scheme, of course, could only function within the peculiar circular logic of the era: De-criminalizing and de-stigmatizing homosexuality, for example, would have been a very elegant and efficient solution to the problem, since nobody would have been able to blackmail anybody about anything.

But that wasn’t on the table back then, when government and cultural institutions were trying to shore up “traditional” gender roles for economic reasons. Women were thanked for their wartime service but then encouraged to give up their riveting positions, so that men, returned from the war, could have jobs and assume their breadwinning roles. That was part and parcel of a new level of stigmatization over homosexuality, now a threat to post-war prosperity represented by this renewed valourizing of the nuclear family.

Purging the secret gay men and lesbians from the civil service was no easy task, however, since they were closeted and, the more they were persecuted, the more they sought secrecy. Accordingly, the RCMP had to develop tactics for spying upon and unmasking queer individuals. The most insane component of this program was the “fruit machine,” a contraption that sounds one part Blade Runner and one part A Clockwork Orange: Suspected gay men and lesbians were seated in a reclining chair and exposed to porn emitting from a black box, while a camera measured the subjects’ pupil dilation and a sensor kept track of their metabolic responses, from perspiration to blood pressure.

When it became clear that the fruit machine didn’t work, it was shelved—although not until the late 1960s, after at least a decade of active duty. But persecution of the queer community didn’t end there. It’s unclear just how many men and women lost their jobs in the lavender scare, but thousands of files were kept on Canadian citizens who were discovered with interrogation tactics that forced suspected homosexuals to name names, as well as through covert entrapment schemes in theatres, public bathrooms and bars.

Policies of hate and discrimination at the federal level have an unfortunate way of trickling down, and even though there were no nuclear secrets to protect in many cities other than Ottawa, police forces in many municipalities across Canada adopted invasive and brutal surveillance policies anyway. Montreal saw many raids on gay clubs and bars and, in Toronto, the queer community lived in fear of the “Cherry Beach Express,” a reference to recurring police brutality after dark in a desolate waterfront area of the city. The 1981 bath house raids, also known as Operation Soap, were a dramatic and brazen public demonstration of the many years of abuse the queer community had already suffered at the hands of municipal police forces, as well as the national ones. The protests that erupted after the 1981 event were an extension of Pride, which was always an act of public resistance against local police violence and federal policies of discrimination. It was radical, and it was relatively effective at making change.

Which is why, when Black Lives Matter alleges systemic discrimination, excessive use of force and intimidation by the police, Pride organizers must take their protest seriously. Police marching in Pride makes it seem as if police reform is a fait accompli and brutality is a thing of the past. It would be a PR move, and BLM is here to point out that there’s plenty left to do, with many Toronto citizens still living in fear of the Cherry Beach Express, just in a different form. Pride organizers saw the merit of that argument which, tacitly, acknowledges that there’s no finish line in the struggle for civil rights and, further, that it’s meaningless if it isn’t extended to everyone.

Seventeen Toronto city councillors, though, seem to think it’s a done deal and, as such, voted to take away funding from Pride for its expression of a political sentiment. Fortunately, 27 others knew their history and acknowledged that Pride began as a protests against police brutality, the fruit machine, and systemic discrimination—and that activism made a difference between 1970 and 1995, and it can make a difference still.

Maybe we’re making progress after all.