What will Winnipeg do with Canada's most famous intersection? 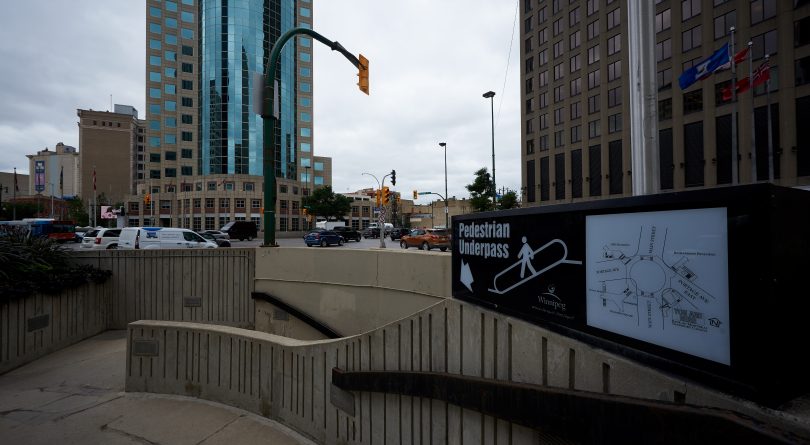 To cross one of the most famous intersections in the nation, pedestrians in Winnipeg must, like prairie dogs, head underground. Since 1979, Portage and Main has been closed to humans on foot (or bike or wheelchair) by waist-high concrete barriers and signage warning them off from even thinking about hustling across a no-man’s land once venerated as the “Crossroads of Canada.”

Instead, ’Peggers and tourists alike must descend an often urine-reeking stairwell into an underground concourse and negotiate a disorienting route to get to the other side. Total trip time: 4.8 minutes for able-bodied adults who know where they’re going. If you’re disabled and have to rely on as many as six elevators to reach your destination, the trip can take 10 minutes.

“For four decades it’s been neglected, and it shows,” says Brian Bowman, Winnipeg’s mayor. Rainwater from street level dribbles into the concourse shops below. “There’s rebar sticking out,” he continues. “Black mould. Asbestos. It really doesn’t reflect a positive light on such an iconic and historic intersection.”

In 2014, Bowman won a landslide election with a campaign that included a top-priority promise to open the crossroad to pedestrians. Bowman couldn’t quite get it done during his ﬁrst term. Now, in a rare plebiscite, Winnipeggers themselves will decide.

In its heyday, Portage and Main was like the belt buckle of the Canadian consciousness. The intersection was honoured with an eight-cent stamp issued in 1974, and much later, a Randy Bachman and Neil Young tune about “Portage and Main, 50 below.” But two years after the stamp came out, city council agreed to a developer’s demand that, in exchange for building three commercial skyscrapers downtown, the intersection would be closed to pesky pedestrians for at least 40 years. The idea was that people would be ushered underground through Winnipeg Square, a concourse lined with shops and a food court.

On Feb. 24, 1979, the ﬁrm—though it only built one skyscraper—got its way; the concourse ofﬁcially opened to business, and barriers closed off Portage and Main to pedestrians, despite months of protests.

Today, the renewed ﬁght is pitting motorists against pedestrians, suburbanites against urbanites and of course politicians against each other. What they have agreed on is that in Winnipeg’s upcoming civic election on Oct. 24, the following plebiscite question will be added to the ballot: “Do you support the opening of Portage and Main to pedestrian crossings?”

Many of the owners of property surrounding the intersection who for decades favoured the pedestrian-free Portage and Main now favour reopening it. They’ve seen how, over time, the closure stilled the downtown’s heartbeat. Critics say the grey cement barriers that replaced curbs give the downtown a decidedly uninviting, Stalinist feel. There are few cafés, pubs and other above-ground amenities in the immediate area.

“You could shoot a cannonball there, because there’s no reason to go there,” says Adam Dooley, the owner of a public relations ﬁrm, who, with a group of downtown businesspeople, started VoteOpen, a GoFundMe campaign hoping to raise $100,000 toward convincing Winnipeggers to remove the barriers.

Whether or not Portage and Main opens to pedestrians, the city must still spend an estimated $4 million for repairs, says Stefano Grande, who recently stepped down as CEO of Downtown Winnipeg BIZ, which advocates for more than 1,300 businesses in the city’s core. While reopening Portage and Main to walkers may cost more (a city-commissioned study estimates $6.1 million), Grande argues the money would reap greater beneﬁts for Winnipeg than a regular repair job. He cites the experiences of cities such as Boston that are revitalizing their downtowns by making them friendlier to pedestrians. “It will just create a better place for Winnipeggers, never mind the tourists who come to this famous corner to see the windiest place in Canada.”

Still, the majority of Winnipeggers seem satisﬁed with the status quo, with many voicing concerns on social media about slowed-down commutes. A Probe Research poll in 2016 suggested 53 per cent of Winnipeg adults wanted the barricades to stay. And opposition remains strong, despite a 2016 trafﬁc study that came out after the Probe poll, ﬁnding that reviving pedestrian access would only slow afternoon rush-hour vehicular through-trafﬁc by, at most, 57 seconds. As one poster summing up the debate wrote on Twitter recently, “Winnipeggers see pedestrians as speed bumps.”

The VoteOpen faction says the delays for motorists are a small price to pay for a more vibrant downtown. (The group’s GoFundMe got off to a quick start with a slickly produced video, raising $3,000 on its ﬁrst day. But in the ensuing weeks, donations slowed to a crawl; at the time of writing, VoteOpen has raised just $7,265.)

But that won’t change Jenny Motkaluk’s mind. The owner of a consulting company, she is running for mayor against Bowman, and is on record saying the city shouldn’t spend “a single dollar” reopening Portage and Main, arguing the city has higher priorities. “You might have noticed that our violent crime statistics, which were recently released, are off the charts relative to other Canadian cities,” she recently told Maclean’s.

The whole debate worries architect Brent Bellamy, a co-organizer of the VoteOpen campaign. The same poll suggesting majority support for keeping the intersection closed, he notes, also found 61 per cent in the 18-to-34 age bracket wanted the barriers removed. “It’s really unfortunate that it’s dividing the city,” he says. That’s a lament not lost on Bowman, who, though he has promised, if re-elected, to honour the result of the plebiscite, clings to his hope to make Portage and Main better reflect the spirit of its modern-day inhabitants. “I have long argued,” he says, “that this is where Winnipeg and Winnipeggers come together.”