What you need to know about EI reform 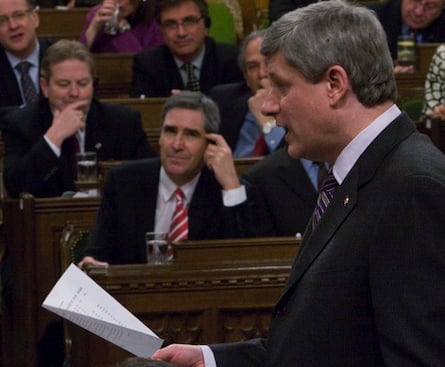 Perhaps it’s a sign of the tough economic times. As the ranks of the jobless continue to swell in Canada, politicians have taken to bickering over just what to do with them. Over the past month, the Liberals have made no secret they see employment insurance (EI) reform as a viable trigger for bringing down the government. “I just know in my guts as I go across the country,” Ignatieff told reporters at the party’s convention in early May, “that we have an EI system that is not purpose-built for the most serious economic crisis since 1945. And we have to fix it and we have to fix it now. We’re in a crisis situation.”

Fixing it, according to Ignatieff, means lowering the eligibility requirements to 360 hours, or nine 40-hour weeks, for everyone. In most circumstances under the current system, laid-off (or otherwise unemployed through no fault of their own) workers need to have worked between 420 and 700 hours in the previous year, depending on where in the country they live. (Under certain conditions, up to 910 hours may be needed to qualify.) That’s because EI requirements are based on a byzantine system of 58 “economic regions,” each differentiated by their unemployment rates. Regions with high unemployment, like the Gaspé and Northern Manitoba, have the lowest barriers to EI, while places like Ottawa and Saskatoon, where unemployment hovers in the low single-digits, require substantially more hours worked. (In other words, the system works unlike any other insurance plan: the more likely you are to make a claim, the easier it is to make it.)

The Liberals acknowledge that lowering EI eligibility requirements means throwing more money at the unemployed. They peg the total cost of the change at around $1.5 billion. But for supporters of the move, the extra money would work to stimulate the economy in much the same way all that infrastructure spending was supposed to—only quicker. “EI is a very direct and immediate form of stimulus,” says Jim Stanford, an economist with the Canadian Auto Workers. “The money goes right into the pockets of the people who need it the most and the economic evidence is clear that they spend it right away.”

Dusting off their trusty anti-Kyoto rhetoric, the Conservatives have attempted to brand the Liberal proposal a “socialist scheme.” The very thought of allowing more people to collect EI benefits by working less appears to run against their ideological grain. “They are suggesting that what we should do is bring in an EI system where any Canadian, anywhere in the country, in perpetuity, could work 45 days and collect EI benefits for a period up to a year,” Stephen Harper said last week. “This is an absurdity.”

Thing is, that’s not how the system works. The amount of time someone can spend on EI depends on two things: where they live and the amount of hours they’ve logged at work. For example, a part-time worker who’s logged 1,000 hours in Ottawa, where the unemployment rate is a relatively low 5.6 per cent, would qualify for 23 weeks of EI. That same worker, were they in rural Newfoundland, where unemployment tops the 20 per cent mark, would be eligible for 45 weeks of payments. Currently, there’s no way qualify for a full 50-weeks’ worth of cheques by having worked only the bare minimum number of hours. The longest period of time for which a person can receive benefits after working the minimum number of hours is 37 weeks—and even then, they would have to live in an area with an unemployment rate over 16 per cent. Someone who worked the minimum number of hours in a place like Ottawa would get a comparably meager 19 weeks’ worth of benefits.

The Conservatives aren’t the only ones who are guilty of obfuscation in this debate, though. When the Liberals complain that “over 60 per cent of unemployed Canadians do not qualify” for EI, they’re barely in the ballpark. Of the 1,456,600 unemployed Canadians in March 2009, 681,400 (47 per cent) were receiving benefits, meaning 53 per cent of them weren’t covered by the program. But many of those who are unemployed don’t qualify for benefits for a variety of reasons that have nothing to do with the number of hours they’ve worked. They may have quit their job or been fired, for instance, or been self-employed, meaning they never paid premiums in the first place.

According to a 2007 study by the Ministry of Human Resources and Skills Development, an insufficient number of work hours accounted for about 17 per cent of cases in which people don’t qualify for EI. And lowering the eligibility requirements wouldn’t even necessarily cover them all; if people have never worked or not worked in the past year, they wouldn’t qualify for benefits no matter how low the threshold is set. “I really don’t see who is supposed to benefit from [lowering the elegibility requirements],” says University of Laval economist Stephen Gordon, who regularly blogs about the issue. “There just aren’t that many people right now who got hired a few months ago—December and January were horrible in the labour market—and who’ve lost their jobs.”

The real reason behind the Liberals’ sudden desire to change the system they put in place 13 years ago is most likely political. The universal 360-hour requirement just so happens to be the same figure both the Bloc and the NDP have lobbied for over the years. It also just so happens that the Liberals will need both parties’ support if they hope to take advantage of their party’s surge in the polls and force an election. For Ignatieff, focusing on the country’s unemployed may simply be the quickest way to having the Conservatives join their ranks.