The company behind MyDemocracy.ca and Vote Compass was supposed to launch a massive survey ahead of Canada Day. That’s not going to happen. 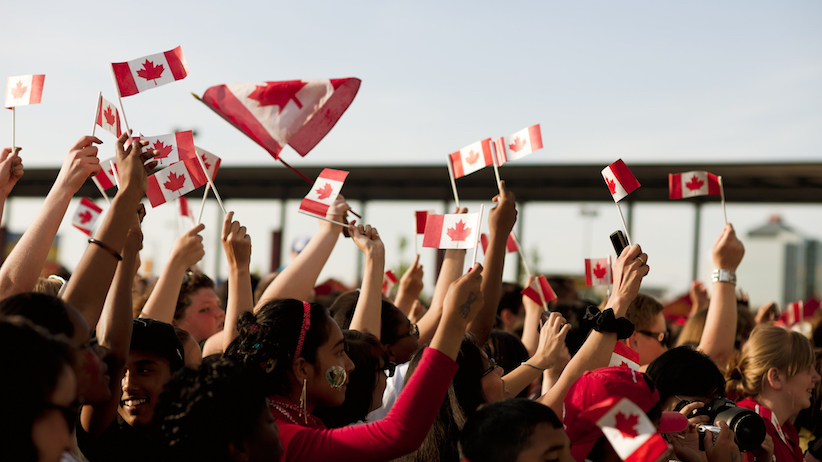 Going into the gathering, Gilchrist thought he’d be in for a night of intense debate. Instead, he says he was surprised as people patiently waited their turn to talk and listened instead of trying to chime in with their two cents at every opportunity. “I remember leaving there thinking it’d be nice to do more things like that where we talked with people we don’t know from different political stripes,” Gilchrist says. “We talked about things that are important to our country and we realized that most people aren’t as far apart as we sometimes lead ourselves to believe.”

The lively discussion itself was part of Project Tessera—named to represent the tiles that make up a mosaic—which involved a seven-stop cross country tour last year, from Halifax to Richmond, B.C. to Whitehorse. According to the project’s website, the goal of the tour was to “conduct the largest ever survey of Canadian attitudes and aspirations.”

The funding for the initiative came from the federal government’s Canada 150 Fund by way of a $576,500 grant for Vox Pop Labs—the same company that received a $326,570 contract last year to create the electoral reform website MyDemocracy.ca (which critics attacked as unscientific), and also produces the CBC’s Vote Compass tool (which critics also argued was biased towards concluding a person’s political preference as Liberal). It was one of 38 “signature projects,” identified by Heritage Canada as “large-scale, participation-oriented activities, of national scope and with high impact.”

With its latest government-funded project “Vox Pop researchers will use finding from these discussions to shape our survey—which will be launched by our broadcast partner CBC in early 2017,” it wrote on the Project Tessera website.

Only that still hasn’t happened. With days until Canada Day, there is no mention of Project Tessera on the CBC website or anywhere else online. The email address on the Project Tessera website is dead, and its phone number redirects callers to MASS LBP, a Toronto-based public engagement firm that is no longer working on Project Tessera. (The project’s web page was taken down days after Maclean’s contacted Vox Pop Labs asking for an update, with the site now redirecting to the Vox Pop Labs home page.) A Twitter account associated with the initiative, meanwhile, managed to attract just 21 followers, and has published merely eight tweets, with no updates since November.

So with more than half a million dollars in taxpayers money deployed—and little to show for it yet—what ever happened to Project Tessera?

Since the initial tour, according to Vox Pop Labs CEO Clifton van der Linden, Project Tessera has continued with small and large panel studies across the country. After analyzing tens of thousands of survey responses, he says, “we modified our approach to the user experience, opting for a more nuanced model than the classification model that we originally proposed. The modified project scope and specifications will take additional time for us to implement.”

Instead of an “early 2017” launch date, as initially proposed, the project is scheduled to launch with CBC sometime in the fall—though an exact date has still yet to be determined.

Van der Linden isn’t worried about the delayed launch. “A launch closer to July 1 risks having Project Tessera get lost in the shuffle,” he wrote Maclean’s in an email. “I daresay that such reflection needn’t end on July 1, and Project Tessera is an opportunity to extend a worthwhile dialogue. I realize that this may come off as a post-hoc justification, but I genuinely believe that this is in the best interests of the initiative.” (Van der Linden was unavailable for an interview over the phone, stating he was currently abroad working on a different project.)

Nor does Van der Linden believe the project is behind schedule, stating his company could have delivered what they initially proposed on time, but their new approach is “demonstrably better” and worthy of an extension.

It’s worth noting that in the spring of 2016, around the time Ottawa awarded Vox Pop Labs nearly $600,000 to conduct the survey, the government allocated $500,000 in its 2016 budget to Statistics Canada to produce better data about foreign property buyers, an amount that was lambasted by critics as being too insignificant for the task. When van der Linden was asked why Ottawa should not have simply turned to its own statistical agency to carry out the Project Tessera survey, he said his survey will “provide each user with a personalized analysis of how their relationship to Canada compares with that of other Canadians” and that the agency “does not build these sorts of applications.” Heritage Canada did not respond to multiple requests for comment.

Will Project Tessera live up to its $600,000 billing? Before its website was taken down, it stated the initiative would ask “more than two dozen questions of as many as 1 million Canadians.” As of right now, Van der Linden says “we have surveyed thousands of Canadians,” but that once the project launches it is hoped as many as one million will participate.

As for the CBC, spokesperson Chuck Thompson confirmed Project Tessera is set to launch sometime in the fall, adding: “This partnership is still in the early stages of development so best if you circle back with me in the Fall when we will have more to say about it.”