What will the Fort McMurray fires mean for wildlife?

Where the wild things are: What happens to animals when they're caught in a forest blaze 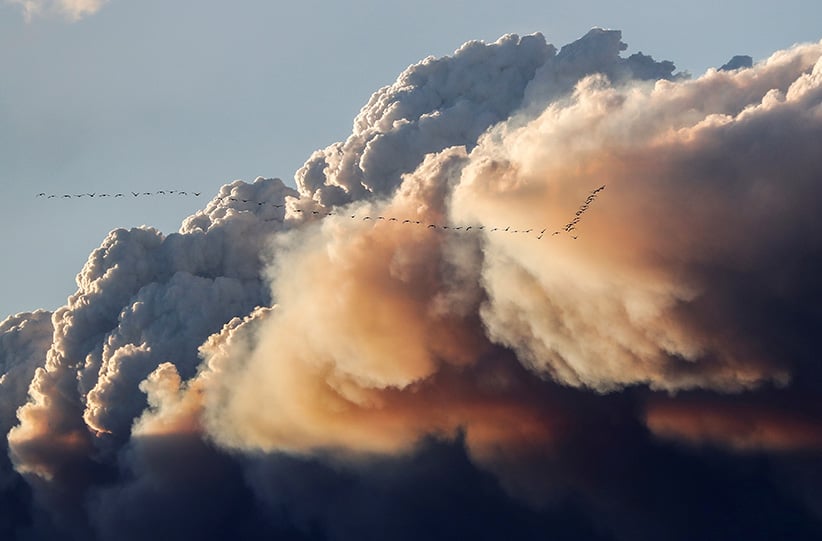 A flock of birds fly as smoke billows from the Fort McMurray wildfires in Kinosis, Alberta, Canada, May 5, 2016. (Mark Blinch/Reuters)

Between fight and flight, much of the wildlife near Fort McMurray has neither option. The 587 species living in Alberta range from caribou and cougars to black widow spiders and slugs, all of which suffer from smoke inhalation, burns or exhaustion when trying to flee forest fire. “There’s wildlife that are going to be just incinerated,” says Colin Weir, director of the Alberta Birds of Prey Society. “I’m sure we’ll have tens of thousands of losses.”

Nobody knows the exact number of wildlife in the area (although the oil company Syncrude did leave behind its herd of 300 bison). However, Alberta’s warm winter this year likely worsened the impact. Migrating species, from white-tailed deer to bumble flower beetles, usually don’t return to the Fort McMurray region until late June, but the warm temperatures sped up their schedule. The Alberta Institute for Wildlife Conservation, a rehabilitation centre for injured and orphaned wildlife in Calgary, which is on the migration path, has admitted 86 per cent more animals so far in 2016 compared to this time last year. The patients include a great horned owl chick, a jackrabbit and nestling songbirds. “We’re seeing them nesting earlier,” says Holly Duvall, director of the institute. “It’s breeding and mating season for all species in Alberta.”

All animals risk dying in the fire, whether they are newborns, parents or those without young. Babies have little strength to evacuate and also delay their parents’ escape. “We’re just about nearing pup-den season,” says Sadie Parr, director of a B.C. non-profit called Wolf Awareness. “I don’t think a mother would be able to evacuate.” After fires in southwestern Alberta in 2002, which occurred long after breeding season, the Alberta Birds of Prey Society received about 10 great-horned owls to its clinic. “Their feathers had been singed off, and their skin was burnt,” says Weir.

Related: The science of forest fires—and their ecological upside

Although wildlife don’t show pain as a defence mechanism, clinicians say they experience it. Duvall’s clinic in Calgary admits animals with broken limbs and fractures—injuries sustained by getting hit by cars or electrocuted by wires—and they administer pain relief medication. “Animals do feel pain,” she says. In Fort McMurray, she says, “I’m sure there’s been a lot of suffering and a lot of death.”

Fortunately, some wildlife may be able to anticipate wildfire. Weir gives the example of raptors such as eagles and hawks. “A lot of these birds have superior vision and superior hearing,” he says. “They’ve definitely got the best opportunity to escape.” Further, Todd Zimmerling, president of the Alberta Conservation Association, says, “if someone told me there was a moose running for it before they knew, I wouldn’t tell them they were wrong.”

The chance of each species surviving the fire depends on its subsequent defence mechanisms. Birds make up 411 of Alberta’s 587 species, and while raptors may fly away, smaller birds that fly at lower altitudes can die of smoke inhalation or exhaustion. “Some might just become disoriented and overwhelmed and end up perishing, sadly,” says Weir.

As for small mammals, a porcupine’s first response in the face of danger is to climb up trees. “That’s not overly useful in this situation,” says Zimmerling. “They’re not overly mobile.” Squirrels scurry to the very top branches, while burrowing animals can die if they don’t dig deep enough. “We may end up with animals cooking in the burrows unfortunately,” says Zimmerling. Mark Heathcott, a firefighter of 23 years in Banff National Park, recalls finding the body of a wolf that died during a controlled burn. “She panicked and tried to return to her den,” Heathcott says.

Animals that get seriously injured rely on firefighters to find them and transport them to a clinic. Former Ontario firefighter Randy Bedford admits that fire departments aren’t quick to do so. “Animals are an afterthought, to be honest,” he says. “They’re down the list of priorities.” When Weir received great-horned owls after the fire in southwestern Alberta, the birds only survived because volunteers had delivered them in boxes after picking them up from a fire department. “The chances are slim to none,” he says.

Animals that take refuge on patches of wet land or windy slopes may also improve their chances of survival. “Although images in the news show vast areas being burned with a huge pillow of smoke,” says Zimmerling, “if you return to the area, you’ll notice small patches left unburned.” As he says, “it’s certainly not a complete lose of wildlife in the area.”

The fire also doesn’t mean a complete loss of habitat. Forests naturally burn, usually every 10 to 100 years, and the affected area will invite more sunlight, new grass and berry-producing bushes. “I can guarantee within days, you’ll see animals moving back to the same area looking for fresh vegetation,” says Zimmerling. “You’ll see a bump in numbers of deer and other ungulates. You’ll see an actual explosion of the moose population because there’ll be shrubs they like to forage on.” Further, the trees that are left standing but dying provide comfortable snags for birds. “Woodpeckers will move in,” he says. “The mice, they’ll be okay.”

While the fires continue to burn in the Fort McMurray region, the fate of wildlife could depend on human tolerance. If they get pushed into Tar Island to the north or Anzac to the east, they could become unwelcome neighbours to humans. “Alberta uses poison, pellet guns and snares all over the province,” says Parr of Wolf Awareness. “It’s just hoping for tolerance when animals are forced into an area where they’re unplanned. It’s having the will and the want to coexist with them.”