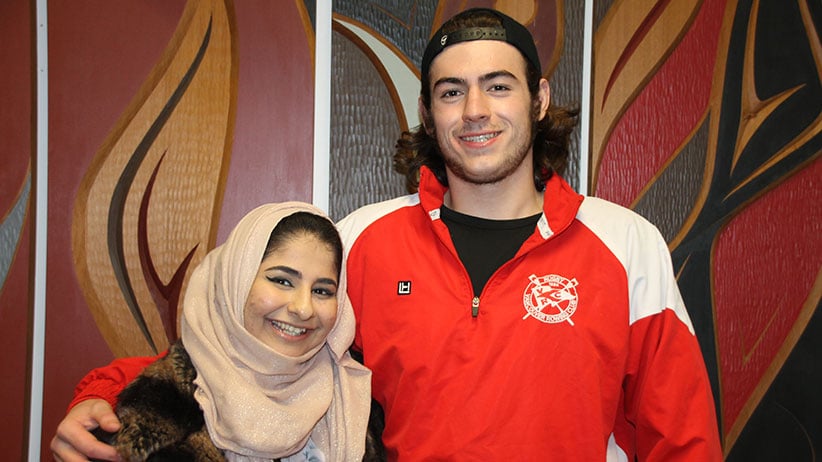 On the evening of Dec. 4, 18-year-old Noor Fadel—a Muslim teen born in B.C. whose family moved to Canada from Iraq—was allegedly attacked by a man on a Vancouver SkyTrain who screamed obscenities and threats, slapped her face, and attempted sexual assault.

Unlike a similar recent incident in Calgary, where customers at a supermarket intervened to protect a cashier who being assailed by racist insults, onlookers on that SkyTrain did nothing—that is, except for 21-year-old Jake Taylor, who reportedly stepped in to protect Fadel until she reached safety.

Pierre Belzan, of no fixed address, has since been arrested and charged with assault and threatening to cause death or bodily harm. Transit Police have also recommended a charge of sexual assault.

On Dec. 6, Fadel and Taylor spoke to Maclean’s about what they saw, what responsibility the public should have in stepping in when they witness such incidents, and whether they’re surprised that this could happen here in Canada.

Q: Noor, tell me in your own words what happened on the evening of Dec. 4.

Noor Fadel: I was coming home from work in Burnaby and I missed the last bus, so I took the Expo line SkyTrain and then changed to the Canada Line. At the Waterfront station around 9:57 p.m. at night, I was on a phone call with a friend and the train was going toward Vancouver City Centre. A man approached me in an aggressive manner and was shouting at me. I took out the earphones and heard him screaming at me in Arabic—it was like classical Arabic with a French accent. He said in Arabic, “go back to your country! I’m going to kill you and kill all Muslims!”

Then he tried to grab my hijab and pull it off and tried to force my head towards his crotch, shouting obscenities in Arabic.

He raised his hand as if he were going to hit me, but no one on the train did anything. Then he struck me across the face, and that’s when Jake came over to help me. Jake came over and yelled at him and stood in front of me and protected me until we got to City Centre. I was in shock, hyperventilating and extremely upset, but Jake stayed calm and called 911 and waited with me until transit police and paramedics arrived on the scene.

Q: Were you shocked that only one person intervened?

NF: I did nine years of judo and I know how to defend myself, but when an assault happens so quickly you don’t have time to react. I could have pressed the alarm, but I didn’t think of it, and it was not accessible from where I was sitting.

I felt disheartened that no one intervened at first. I’d like to believe I would have helped someone in a similar situation, but perhaps they didn’t have time to react either.

Q: Jake, can you tell me what you saw and did?

Jake Taylor: I got off work at the Gastown pub where I work as a cook and got on the train at Waterfront Station. I sat about five or six seats back from Noor and there were maybe a dozen other people on the train. I heard a noise so I looked over and saw a commotion. At first I thought maybe it was a joke between friends, but then I saw him try to force her head towards his crotch and I ran over. I shoved him towards the door and told him to get the f–k out of there. He shut up immediately and looked out the window. He got off at the next station but Noor was having a panic attack so I stayed with her.

When I saw all the other passengers just kind of hiding behind their phones and doing nothing, I felt angry.

When I went to help Noor, I didn’t notice the hijab at all—only a smaller, younger person being attacked by a bigger, older man. I did what any of my friends would have done in the same circumstance.

Q: Given the dangers of intervening in racist attacks—like the tragic incident in Portland where two men were killed for doing so in May—can you tell me what went through your mind when you decided to help Noor? Were you afraid?

JT: No—but the moment after I shoved him, I realized he looked skinny and unwell like a junkie, so I didn’t want to risk getting jabbed with a needle or worse. So I didn’t escalate things, but just stayed calm and stood in front of Noor. But I wouldn’t hesitate to do the same thing again.

More people need to stick together. We’re all human beings—it doesn’t matter the colour of your skin.

Q: Noor, have you or your friends ever had similar incidents happen in public? Where and when?

NF: Almost every other day I get verbally assaulted and it hurts every single time—at my workplace, at my school, in everyday life.

I work in retail and I’m known for great customer service. The other day I asked a woman in the shop if she needed any help. She just stared at me blankly and said nothing. Then she came close behind me and said “Get the hell out of here and go back to your country.” I was born in Burnaby—it was awful—I had to go to the back room and cry. Sometimes you think it’s over with and then it happens again.

The people who target me are so lost in Western media’s misperception of Muslims. There are 1.2 billion Muslims in the world. We’re your doctors and teachers and neighbours—not your enemies. Fear comes out of ignorance. I write poems and sketch in my spare time. I don’t spend time planning bomb attacks.

Q: How do you feel now after the attack? Do you feel safe here?

NF: I felt very anxious on the train yesterday. I went back to see exactly where I’d been sitting, to see where the silent alarm was. The only one anywhere near me was behind me—so I couldn’t have done anything—only someone else could have pressed the alarm.

Q: When did your family come to Canada from Iraq?

NF: I was born and raised in Vancouver, but my parents came here as immigrants in the mid-1990s [during the era of sanctions and Saddam]. My mum was a nurse and my father was a pharmacist. My mother was in Baghdad during the bombing in 1991 and I wrote a poem about her experience.

Q: Post-invasion, women in Baghdad now have to fend off attackers with knives and guns. Did you ever expect that you would face this kind of violence in Canada?

NF: Some people in the comments sections of news stories on the incident expressed surprise that such attacks could happen here. But this happens in Canada and around the world. Ever since I posted my experience online, I’ve received over 500 messages from Muslim women in Canada sharing their experience of Islamophobic violence. And thousands of other messages from Sikh women, Jewish women First Nations women and others who have to deal with racist violence every day in Canada.

Q: Are you surprised by rising Islamophobia here in Canada?

NF: It’s gotten much worse in the last three years. But this is larger than just Islamophobia. As an advocate for victims of hate crimes I have to say this was an attack against humanity, not just against a Muslim girl.

But this experience will not bury me or hold me down. I’m hoping that this whole thing will help spread awareness of and prevention of more hate crimes.

JG: It was the first time I saw a woman wearing hijab being attacked. I thought it was disgusting—I know it happens more in other countries, but was shocked to see it happen in multicultural Vancouver.

NF: Frankly, most of the people on the train were people of colour, but it was Jake—the 21-year-old white guy—who actually helped me.

MORE: Too many Canadians don’t recognize the Islamophobia in their country

Q: Do you think the onus should be on the public to have to intervene in such cases? Or should there be greater security on trains?

JG: They should have security guards on the trains at night.

NF: I asked TransLink if they could have security guards—or have later bus times and more frequent buses. And security cameras on the trains.

Q: Noor, what would you like to say to fellow Canadians about what happened to you?

NF: I want to say hate crimes and racism exist in Canada—they’re real. It’s time to stop ignoring them. We need to be accountable and take action and support each other and speak up when they happen. And have tougher laws against hate crimes.

We also have to have a national conversation about what is happening. I would love to do a speaking tour of schools. My last year of grade 12 in Richmond was hell. I faced daily racism at school from other students and teachers just pretended it wasn’t happening. I was on the school yearbook committee and someone inserted a photo of ISIS fighters waving flags over an image of me and two other hijabi girls. When I complained to the administration, I was punished and lost out on a scholarship opportunity.

The danger is that people are okay with racism. It’s normalized and not taken seriously. We have to start at a young age and let youth know this is wrong.

Q: Has one silver lining been an unexpected friendship between you two?

NF: Absolutely. Jake is like my new best friend. My whole family loves him—even my mum whose usually a bit more conservative about me hanging out with boys. He’s invited over for dinner soon.

JG: And I’m learning a lot about Islam and Muslim culture so it’s been kind of educational. In an earlier interview I called the head scarf a “hajib” but now I know the right term for it.

Q: And perhaps as Noor says, this is an opportunity to increase awareness of Islamophobia and racism and their very real consequences.

NF: Just like the “me too” movement, now people are realizing it’s real, it happens, and “she wasn’t lying.”

My parents were always against my activism—for instance, when I organized a peaceful protest at the Trump Tower last year. They were worried about the media attention. But after the attack on the 4th, my mum said, “You go and get on every single news station and represent every single women and Muslim and minority and make your voice heard!”