Why bulldozing encampments isn't a solution for the homeless

Even if the Trudeau government's $55-billion, 10-year national housing strategy meets its goals, homeless encampments are unlikely to disappear 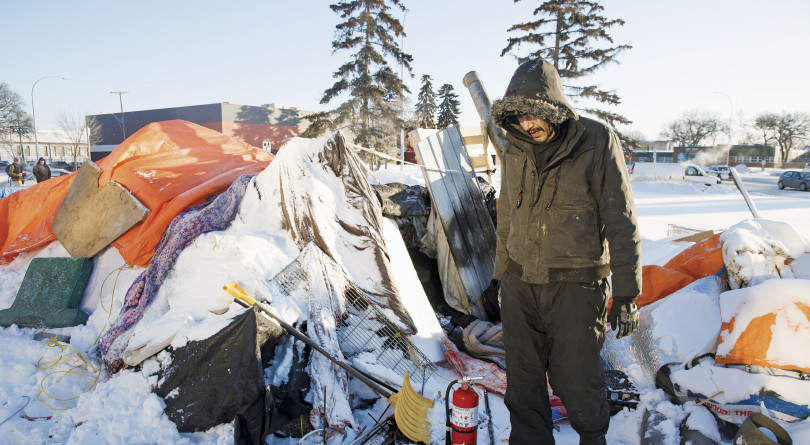 Tower pulls apart the home he has been living in for the last three months outside the MMF building alongside the Disraeli Freeway early Thursday morning, January 16, 2020. The people living in the camps have have been asked to move by the City of Winnipeg. (Mike Deal/Winnipeg Free Press)

Warren Redhead doesn’t mince words when it comes to the situation in which he finds himself. “Sorry about my language, but I think it’s bulls–t,” says Redhead, who’s been living mostly outdoors in downtown Winnipeg since last May. The 39-year-old had found company and shelter at an improvised encampment near the Manitoba Metis Federation building. But after two teepees burned down in an adjacent camp, city officials decided to dismantle both settlements.

In the first fire, a woman suffered serious burns. No one was injured when the second teepee—donated by the uncle of Matthew Allan Sutherland, an Ojibway man who was murdered near the encampment last fall—burned in early January. But fire officials identified several potentially deadly hazards on that site, including a buildup of combustible materials, open flames and carbon monoxide.

A city spokesperson acknowledges the teepees were donated with good intentions, in a “spiritual, healing context,” but adds they lacked the support and monitoring needed to keep them safe. Shortly before they went up, local students set up two warming huts at the camp closest to Henry Avenue. They too have been dismantled. 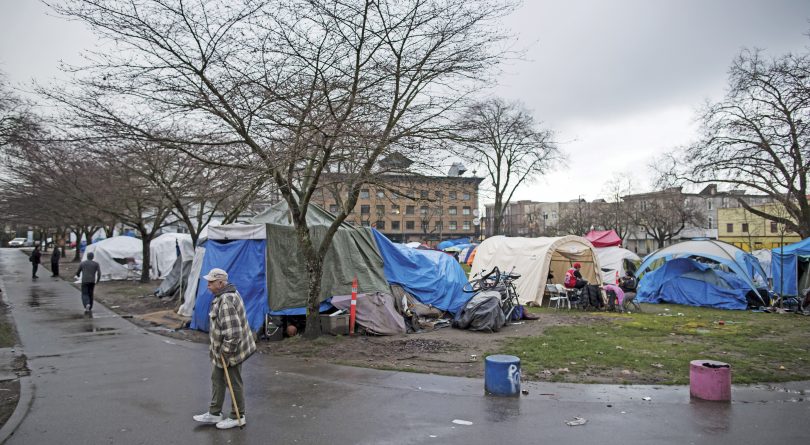 Tents are seen at a homeless camp at Oppenheimer Park in the Downtown Eastside of Vancouver, on Dec. 13, 2019. (Darryl Dyck/CP)

As temperatures sink and winter storms lash every region of Canada, the severity of homelessness across the country has come into sharp relief—in part due to burgeoning encampments like those in Winnipeg, which offer some benefits of community yet are vulnerable to fire and extreme cold.

While no one has been formally tracking their growth, Tim Richter, president and CEO of the Canadian Alliance to End Homelessness, says these makeshift villages are more common and visible than in the past. Homelessness in general, meanwhile, is getting worse: about 235,000 people experience it in Canada each year, up from an estimated 200,000 in 2013, according to the alliance. Of those, around 35,000 are currently “sleeping rough”—that is, living outdoors. The result has been tension with the permanent dwellers around their camps—and frightening incidents for those living within them.

In Vancouver’s Oppenheimer Park, where as many as 100 people live in improvised shelters, firefighters have responded to dozens of blazes. Smaller cities in B.C.—Maple Ridge, Nanaimo and Surrey—have also seen fires in newly formed tent cities. In Toronto, officials recently dismantled a tent settlement near Rosedale Valley Road after flames tore through it.

Richter lays blame for the situation primarily with Ottawa. “Modern mass homelessness,” as he describes it, began with cuts to the national housing program in the 1980s, and grew with reductions in federal transfers in the 1990s; the offloading of housing onto provincial, then municipal, governments soon followed.

In 2017, the Trudeau government announced a $55-billion, 10-year national housing strategy. But even if it meets its goals, homeless encampments are unlikely to disappear. “Affordable housing plays a part, for sure,” explains Rick Lees, executive director of Main Street Project, which provides emergency shelter and long-term care to homeless Winnipeggers. “But a good chunk of the folks who stay outside do so because they like the freedom. That is where they want to be.”

Shelters aren’t always “dignified” places, Lees adds, noting that many lack privacy, are crowded and may not allow clients’ pets or belongings. Those struggling with mental health issues can find the environment overwhelming, he says, while people dealing with addiction may have trouble abiding by shelter rules. The monitoring requirements attached to social assistance programs and the isolation of single occupancy housing can also cause people to opt for encampments. 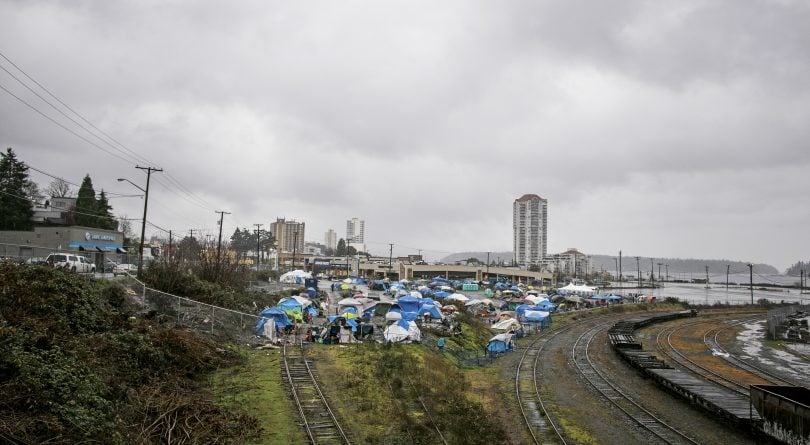 Lees believes the “in-at-seven/out-at-seven” shelter system should be replaced by responsive models aimed at transitioning people into secure, affordable housing. But that would take more funding. In the meantime, Main Street Project and other organizations are working to find housing for those in the Winnipeg camps.

Some living at them say they’ll return to the sites later or camp elsewhere, validating a fear of Richter’s: “If you just bulldoze these encampments without creating a housing solution, you’re not actually solving the problem.”

Which prompts Lees to ask: if we can’t eliminate the camps, should we find a way to improve them? “Instead of criticizing this stuff, can we get ahead of the game and actually create a pop-up community that has supports?”

Some municipal governments, notes Richter, have seen success by treating homelessness almost as they would a natural disaster. Edmonton, for one, has reduced homelessness by 43 per cent in less than a decade by setting up a homelessness command centre that co-ordinates between dozens of entities, pairing mental-health workers with police to divert people toward housing and away from the justice system.

Back at his soon-to-be dismantled home shelter in Winnipeg, Redhead waits in -30° C temperatures for members of the Bear Clan Patrol. The Indigenous-led organization has offered to help him relocate, but he’s not planning to enter the shelter system.

“I liked this spot, because I’ve got it all set up nicely and it feels like home,” he says. “I’ve got another spot to go to. But one day, we’ll probably end up back here.”

This article appears in print in the March 2020 issue of Maclean’s magazine with the headline, “The grim outdoors.” Subscribe to the monthly print magazine here.