Why Calgary council drank the publicly subsidized Kool-aid on arenas

The Flames waited until booster-minded city politicians couldn't hold out any longer for a success story. It just might work. 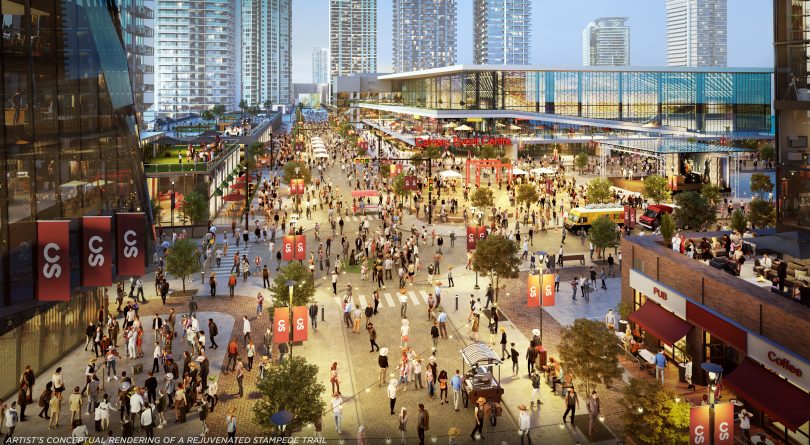 City of Calgary and Flames hockey team brass released a single arena image on Monday when revealing the $550-million deal to build it, except it wasn’t really an image of the arena. A glassy hockey-and-concerts barn appeared as background in the upper-right corner,  as part of a horizon of condo towers that also don’t yet exist.

The rest of the “Here’s What’s in Store, Calgarians!” scene depicted a beyond-bustling streetscape outside the arena. Lively restaurant patios at rooftop and street-level. The only vehicles depicted are food trucks. Uniformly thin figures congregate in the streets for blocks and blocks.

“Oh my. Someone left the people rendering machine on!” a Winnipeg architect wrote on Twitter.

You’re buying an arena but you’re really getting the lively city of your dreams, goes the pitch—to Calgary, and to every other mid-size North American city where taxpayers are expected to subsidize pro-sports venues. The examples of promise fulfilled are rare, but every time a city’s politicians and boosters say their town has the unique entrepreneurial can-do spirit to make it work here. The buzz phrases buzzed buzzily at the presentation: “catalytic development,” “place-making,” “place-builder,” “about the Calgary of the future.”

To replace the Saddledome, the city will fork over $275-million of the project costs as part of a 50-50 deal with the Flames’ oil-executive-led ownership group,  vacuuming up from various pockets almost every last cent of available infrastructure money for the foreseeable future. Mayor Naheed Nenshi and councillors laughed the Flames’ ownership group out of the room the last couple times Flames president Ken King showed them a supposedly city-transforming “event centre” project and funding scheme—the most recent attempt coming on the cusp of the 2017 municipal election, when the team requested the city pay $225 million, while the Flames’ owners would cover $275 million.

What changed in less than two years? Flames sweetened the pot by pledging a two per cent ticket tax that will bring the city $155 million over 35 years, and added some other cash benefits. After years of negotiating in public and imagining residents would persuade the politicians, King abandoned that fantasy and engaged in private discussions with city hall and the Stampede, the nobody-shall-offend Calgary institution whose land is home to both the Saddledome and newly imagined Futuredome. Pivotally, these negotiations largely sidelined Nenshi—who proved skeptical and polarizing on this project in the past—in favour of some more classically boosterish, pro-business, pro-subsidy councillors.

In the end, even Nenshi and most of council are saying it’s a good deal they should quickly accept. Why? It’s likely that they feel the overwhelming need to claim success after so much has fallen sideways in Calgary. The city’s still mired in economic slump. The hollowing out of the downtown office core has evaporated much of the city’s property tax base, triggering a crisis council has been devastatingly slow to address, until lately when a near-revolt broke out and it pledged to hack $60 million from the operating budget. The service impacts were debated, in a flourish of timing far too rich for any credible screenwriter, the day after the subsidized arena deal was unveiled. There are no handouts of bustling city streetscapes when council discusses slashing $7 million each from police, transit and fire services, plus lesser amounts from other departments.

The last time city council aimed to do something big and brassy for the Calgary’s betterment was the 2026 Winter Olympics bid—and after years of public debate, economically ornery residents shot down the idea in a plebiscite. With the arena plan, councillors don’t want the public to once again reject something that’s for their own damn good (in political minds, at least). So they’re voting for this proposed deal next Monday, offering less than one week of cursory public engagement. Jeff Davison, the councillor who led the negotiation oversight committee, warned the deal would die if exposed to more than a week’s worth of public oxygen, and “you will be known as the council that lost the Calgary Flames.” (Owners never really threatened to leave, at least not overtly.)

Nenshi and the council want to remember what victory tastes like and get the public excited about something, even at the risk of getting the public furious anew. After Monday’s presentation, Nenshi gathered King and other principal players in the talks for a handshake photo op, until an aide rushed over and reminded the mayor of the optics of shaking hands on a deal that was just opened to public feedback. Oopsie.

Leaders refrain from calling it an arena—it’s an “event centre” that brings in far more than professional sports. We know that’s what arenas already do because there’s a whole sub-genre of music not called arena rock, and not yet one called “event centre rock.” The Saddledome’s distinctive cowboy-themed and aging roof made it woefully inadequate for major concerts, which has meant big-ticket performers like Justin Timberlake, Ariana Grande and Elton John keep Calgary off their touring schedules and only play in (spits on floor) Edmonton and its Rogers Place. For a while, Calgary was confident it didn’t need a heavily subsidized arena like Alberta’s capital city and its moribund downtown. Ken King and Flames owners, after trying for 12 years, were able to wait until the local civic egos were sufficiently deflated.

RELATED: Naheed Nenshi put out a fire. Now he now must deal with the Flames.

So here we are, in the imagined 2024 of Calgary Event Centre days, and somehow the Stampede leaders—who had urged city hall to relocate a proposed light-rail transit station two blocks north to not impede car traffic—now welcome pedestrian-only streets right through their grounds. Everyone is outside. Everyone is happy. All is urbanism.

You glimpse at the handout photo again, and notice that many of the rendering-machine-on-hyperdrive people are wearing cowboy hats. Ah, so the vision is that if Calgary builds a new arena, people will gather en masse at Stampede grounds during the Stampede. Yahoo.

MORE ABOUT THE SADDLEDOME: