Ending the Khomeinist regime will take sustained civil resistance by Iranians, says Nobel laureate Shirin Ebadi, but there are ways for other countries to help 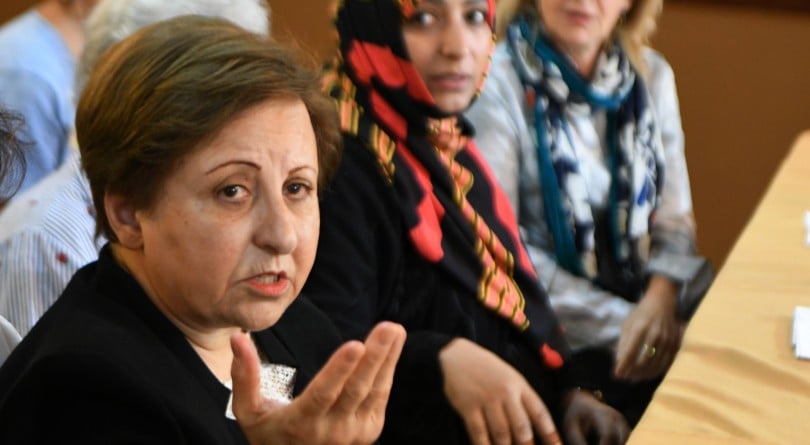 For Iranian democrats, and for the tens of thousands of dissenters who have fled into exile to Canada, Europe, the United States and the far corners of the earth, it is a time of melancholy commemoration.

It was 40 years ago in February 1979, that Ayatollah Ruhollah Khomeini’s theocratic despotism seized the throats of the Iranian people. It’s been 30 years since Khomeini issued his death-warrant fatwa against the novelist Salman Rushdie. It’s been 20 years since truncheons, bloodshed and mass arrests crippled the first rebellion of the revolution’s own children who sought to overthrow the Islamic Republic and lay the foundation of a secular democracy. It was 10 years ago that another paroxysm of bloody repression dashed the hopes of millions of “Green Revolution” Iranians who marched in the streets of Tehran to quietly and peacefully protest the fabricated presidential election of the thug Mahmoud Ahmedinejad.

Last February, a countrywide working-class uprising that had sprung spontaneously from the conservative city of Mashhad only a few weeks earlier was already in its death throes. It was in February last year, too, that Kavous Seyyed-Emami, an Iranian Canadian sociologist and co-founder of the Persian Wildlife Heritage Foundation, died from “suicide” in the dungeons of Evin Prison. He’d been rounded up as part of a mass arrest of Iranian conservationists on trumped-up espionage charges. His wife, Maryam Mombeini, has been prevented from returning to Canada.

Despite the arrests, the beatings and the judicial murders that followed the Mashhad uprising, rebellion has persisted in pockets across Iran and in protests led mainly by trade unionists, by teachers, and by women, in their persistent refusal to submit to the absurd compulsory hijab laws enforced by the regime’s Islamic morality police. Over the past year, the regime’s brutality has deepened into frenzies of persecution.

Hundreds of Christians, Baha’i people, and Sufi Muslims; sugar workers, steelworkers, human rights lawyers and students have been arrested on bogus espionage, blasphemy and national-security charges. The price for demanding an ordinary life in Iran is to be fired, arrested, beaten, lashed, tortured, executed, framed on comically false charge, or taken to a morgue from a prison after having allegedly committed suicide.

On Valentine’s Day, last Thursday, Iran’s Supreme Leader Ali Khamenei marked the 30th anniversary of the fatwa against Salman Rushdie for the “blasphemy” of his novel, The Satanic Verses, by reiterating his predecessor’s incitement to murder as “solid and irrevocable.” Khamenei used his Twitter account to amplify his endorsement of Rushdie’s killing. Twitter briefly suspended his account and deleted his tweet.

It should be obvious to the world by now that the Khomeinist regime is irredeemable. It cannot be reformed. The Islamic Republic has to go. But the theocracy’s overthrow can occur only as a direct consequence of a sustained, non-violent campaign of civil resistance mounted by Iranians themselves aimed at pushing the regime to the point of collapse, Shirin Ebadi, Iran’s most prominent human rights champion and Nobel Peace Prize winner, told me on Sunday.

Living in exile in London since 2009, Ebadi has lately ended up at the forefront of a growing consensus among pro-democracy Iranians that the only way to transform the country’s political order is a popular referendum under Article 59 of Iran’s existing constitution, supervised by the United Nations.

For the time being, however, the UN is “useless” to the Iranian people, and any threat of foreign military intervention would only strengthen the regime’s hand, Ebadi said. A reopening of Canada’s embassy in Iran won’t help, and an acceleration of American-style sanctions would only further impoverish the Iranian people. But there is a critical role for liberal democracies to play in hastening the regime’s demise, Ebadi said, and Canada—which has developed a reputation for sheltering corrupt regime millionaires and serving as a bank-account bolthole for assets quietly swindled from the Iranian people—should take a leading role in the project.

RELATED: Protests in Iran could spell trouble for the Middle East at large

“Canada, for a start, could definitely take steps to that end, especially because there are Iranians residing in Canada who have appropriated funds from Iranian coffers, and they have put that money in Canadian banks. You should take or confiscate that illicit money that they have put into your banks,” Ebadi said, speaking through a translator.

A proposed suite of targeted sanctions aimed at Khomeinist regime officials and their collaborators has already won cross-party support in Ottawa, notably from the NDP’s Murray Rankin, Conservative MP David Sweet, the Liberals’ Michael Levitt, chair of the House of Commons foreign affairs committee, and Anthony Housefather, chair of the Justice Committee. (In the interests of full disclosure: I’m a senior fellow with the Raoul Wallenberg Centre for Human Rights, which has been strenuously advocating this course of action).

So far, however, sanctions under the 2017 Justice for Victims of Corrupt Foreign Officials Act have singled out only a few dozen officials from Russia, Myanmar, Saudi Arabia, Venezuela and South Sudan. Ebadi says that Canada needs to step up and use the Act—known as Canada’s “Magnitsky law,” after the murdered Russian whistleblower Sergei Magnitsky—to target key regime officials in Iran, seizing their offshore assets and outlawing any dealings with them.

“I believe that any targeted sanctions against regime officials or people within the establishment who have violated human rights would be the best way of helping us. And let us remember what happened in South Africa, and in Eastern Europe, or in particular Poland. Let’s not underestimate the power of popular resistance,” Ebadi said. “If the people do stage this civil resistance and it goes to such an extent that the government finds itself helpless under popular pressure, and feels it is on the verge of collapse, then they will give in to the people.”

If matters reached that point, the Iranian constitution’s Article 59 provides that “a popular vote through a referendum” can be triggered “in extremely important economic, political, social, and cultural matters,”so long as two-thirds of Iran’s parliamentarians agree. “Then there should be a UN monitored referendum on the constitution,” Ebadi said, “to ask people whether they think this constitution in Iran should remain as it is, and are the people happy with the current political structure in Iran, or not. Of course, under no circumstance would the government like to have a referendum that would act against them, but it can happen if the people stage peaceful civil resistance, so that the government eventually gives in.”

RELATED: The uprising in Iran: ‘This is what revolution looks like’

That may seem overly optimistic, given the regime’s habits of unbending repression. But the proposition that the regime is incorrigible and incapable of genuine reform is objectively unimpeachable. Despite its pretensions and pantomime elections, the Islamic Republic of Iran is nothing like a democracy. Its constitution ensures that the country’s political and social life must remain confined within the straightjacket of a grim, authoritarian theocracy that describes itself as “a branch of the absolute governance of the Prophet of God.”

“The Supreme leader has absolute authority over everything. He has the power to abolish laws at his will. He is the commander in chief of the military, and he can appoint religious judges as he chooses,” Ebadi explained. “He is in control over everything.”

It was last February that Ebadi figured prominently among 15 Iranian personalities and human rights defenders in Iran and in exile who issued a public letter calling for an end to the Islamic Republic and a UN-monitored referendum allowing a popular vote on a transition to a completely secular democracy. Canada’s Payam Akhavan was among them, as were well-known exiles in Paris, London and Washington. Nasrin Sotoudeh also signed the letter.

Perhaps the most prominent human rights lawyer in Iran following Ebadi’s exile in 2009, Sotoudeh was arrested last June on charges of “acting against national security” and instructed that she would be spending the next five years in prison. Word of Sotoudeh’s arrest came from her husband, Reza Khandan, who was then arrested and sentenced to a six-year prison term for posting about Sotoudeh’s arrest on Facebook.

Among the most corrupt and bloodthirsty Iranian officials who should be targeted under Canada’s Magnitsky law—there are several proposed by the Raoul Wallenberg Centre for Human Rights—Ebadi proposes that Supreme leader Ali Khamenei should not be left out. “Khamenei has great amounts of money and immeasurable assets,” Ebadi said. “You should put his name on the list of Iranians to be sanctioned.”