Why Canadian federalism is bigger than Ottawa and the provinces

The fathers of confederation left cities and Indigenous voices on the outside looking in. It's long past time to change that relationship. 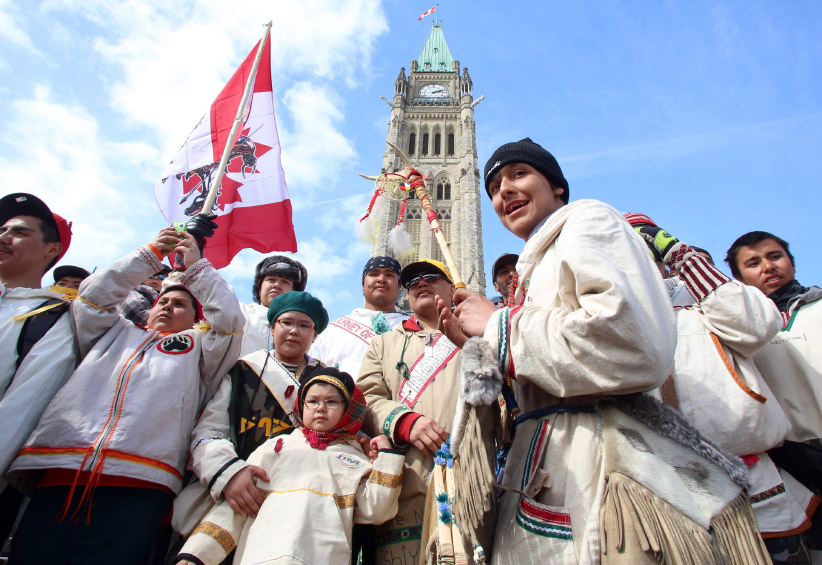 A group of young aboriginal people who travelled 1,600 kilometre on foot from the James Bay Cree community of Whapmagoostui, Quebec celebrate their arrival on Parliament hill in Ottawa, Monday, March 25, 2013. (Fred Chartrand/CP)

Editor’s note: This is the first in a three-part series on institutional transformation at Canada’s sesquicentennial. This piece is on local and Indigenous governments and the future of Canadian federalism.

Spin your radio dial to the national broadcaster’s public affairs program any given Saturday and you will get an earful of our federation in action. You’ll hear a provincial premier like Brad Wall lambasting the federal Liberals for their carbon pricing scheme or a federal minister explaining how she plans to coax the provinces on side for a new health accord. Together, the same old actors trot out the protestations and justifications of federalist acrimony as if they were reading from a mothballed political science textbook.

The thing is, something new is possible under the federalist sun. Canada’s 150th birthday offers a chance to re-examine federalism—the deal that defines the anniversary. It’s a juncture at which Canadians could combine lessons from the past with radical possibilities latent in our public life, never fathomed by our constitution’s framers.

The original compact of federalism embodies both the best and the worst of what Canada can be.

On the one hand, federalism was the ground upon which two distinct nations, different in language, culture and religion, united into one country. It also opened the experimental space for innovations like national medicare and no-fault auto insurance in Quebec and Manitoba. The division of powers allowed for the tug-of-war between diversity and unity while stimulating creative, progressive change.

Yet, the 1867 agreement said nothing of the role of cities, could not have contemplated the contemporary prominence of health care and entirely excluded the political agency of Indigenous people.

If the first 150 years of confederation were dominated by jurisdictional gambits and bluffs between Ottawa and the provinces, it’s time that we pull more seats to the table and deal more players—municipal and Indigenous governments—into the game. Doing so is not only the right thing to do, but will create more effective and democratic governance.

Canada’s massive population swing to urban areas leaves our cities unequipped to fiscally fend for themselves. While the majority of OECD countries allow local governments to tax income or sales, Canadian federalism has left municipalities with only the blunt instrument of property tax.

As Postmedia commentator Andrew Coyne has observed, “property tax conforms to no known principle of sound taxation, being neither fair nor efficient nor simple. It attempts to measure both ability to pay and resource use at the same time, and fails at both.” The result has been failing public transit, a terrifying infrastructure deficit, and a lack of imagination for regenerating public space.

It also gives rise to missed opportunities on the public health front, as those governments that operate closest to where citizens live, work and exercise remain our most poorly endowed, having to go cap in hand to the provinces to support innovative local initiatives. As populations continue to age, preventative medicine championed by empowered municipalities could mitigate crippling health care costs to provinces and perpetually escalating health transfers from Ottawa.

The current federalist arrangement also fails to account for Indigenous political authority, absurdly delegating to the federal government with one stroke of the pen responsibility over “Indians, and Lands reserved for the Indians”. Ironically, Indigenous federalism, in the form of the Haudenosaunee Confederacy, predated the Canadian version on this continent by at least four centuries. But instead of bringing First Nations into the constitutional circle, the fathers of confederation crafted a provision that sounds more like a John Wayne movie than a framework for our 21st-century democracy.

Today, the feds and provinces frequently use the constitution’s division of powers as an excuse to foist responsibility on each other, avoiding properly funding services as basic as First Nations education and child health care—exemplified most strikingly by the death of five-year-old Jordan River Anderson in 2005.

Yet, Indigenous peoples now constitute the youngest and fastest growing demographic in the country. As resurgent Inuit, First Nations and Métis communities demand more autonomy from the federal government, the logical institutional transformation is the rightful inclusion of their systems of governance in the federalist fabric. As McGill scholar Tim Raybould has put it, this would be a Canada in which “‘nations’ are reconstituted and the Indian Act system of federally imposed ‘band’ government gives way to more appropriate systems of governance as part of an evolving system of cooperative federalism”.

The Supreme Court noted in the 1998 Quebec Secession Reference that, “Federalism was a legal response to the underlying political and cultural realities that existed at Confederation and continue to exist today.” The realities in focus were originally French, English and agrarian. Today, urbanization, aging populations and resurgent Indigenous communities demand a grand new federalism.

We make no claim that these changes will be easy. Striking a new bargain will stretch our imaginative and communicative capacities, as well as our abilities to listen to and accommodate one another.

But federalism is meant to be malleable; at its boldest, the Supreme Court has called legislative competence “essentially dynamic”. Indeed, the fact that John A. Macdonald would barely recognize the federalism of today should give us hope for the federalism of tomorrow. That the text of the Constitution Act of 1867 makes no mention of Indigenous political agency or local heads of power should scarcely block their confederation more than the text’s failure to mention a prime minister has prevented the rise of executive power.

The skills and perspectives developed during past constitutional tussles—as well as the basic decentralized architecture of our constitution—mean that we’re better situated than just about any country to face up to these challenges and reinvent ourselves.

If we succeed, it will mean more vibrant cities, justice and power for Indigenous people, and pioneering health care—oh, and just maybe, better radio on Saturday morning.

Fraser Harland and Mark Dance are alumni of the non-partisan Parliamentary Internship Programme and current law students at McGill University. The next instalment of their Canada 150 series will look at the future of the Charter of Rights and Freedoms and the possibility of transforming Canada’s judicial institutions.