Why do we still put young people in solitary confinement?

A new Ontario report shows how isolation for jailed youth can be dehumanizing and riddled with legal violations. How do we fix it? 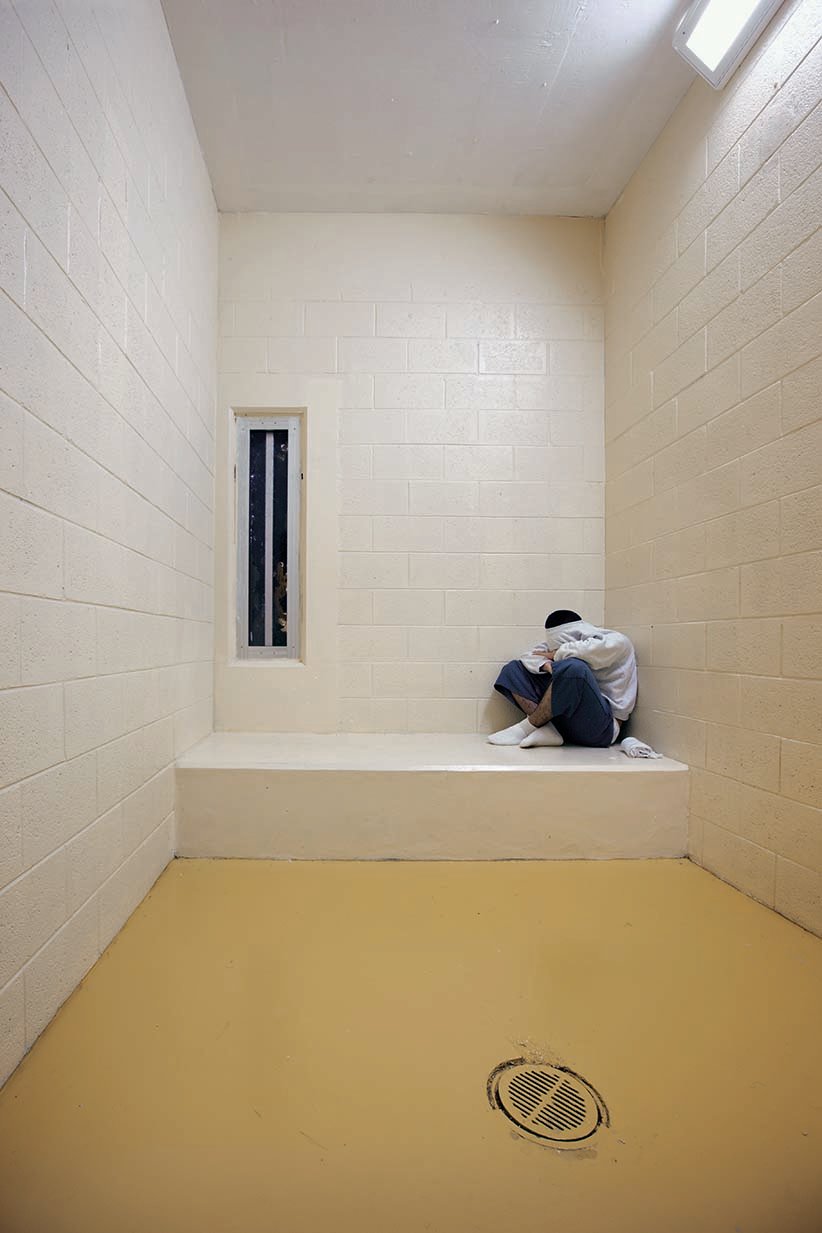 As the provincial advocate for children and youth in Ontario, part of Irwin Elman’s job is to watch out for young people detained in a youth justice facility, which is essentially a jail for anyone aged 12 to 17 who is serving time, or awaiting trial or sentencing. There are 20 across the province, and they all operate under the same legislation and the Ministry of Children and Youth Services. At any point during their stay in custody, young people have the legal right to call the provincial advocate. Elman has fielded many complaints, but even he is alarmed by the serious violations exposed in a landmark report compiled by his office and released this week on the use of solitary confinement.

“It’s a Matter of Time: Systematic Review of Secure Isolation in Ontario Youth Justice Facilities” reveals a startling portrait of injustices and indignities occurring within some of the very institutions intended to uphold the rule of law and respect for human rights. Among the most egregious offences that have happened since 2009, the earliest year studied: young people have been confined for days or weeks longer than is prescribed by provincial law or supported by international research; the use of isolation has increased among the youngest, most vulnerable, subset of detainees, those aged 12-15; youth have endured “dehumanizing conditions” inside the cells such as extreme temperature fluctuations and waiting hours for staff to dispose of their bodily waste; they have been denied their legal rights to access a lawyer or the provincial advocate—and have been taunted as “sissies” by staff for such requests.

Solitary confinement is a lawful practice in Canada, albeit an increasingly controversial one. It is supposed to be used as a last resort to manage behaviour, especially physical aggression; once a threat has ended, youth must be released. In Ontario specifically, the Child and Family Services Act states that individuals under 16 cannot be confined for more than eight hours in one day or 24 hours in a week; those older than 16 cannot be held for more than 72 hours unless approved by a provincial director. And yet, the report shows that in 633 cases, young people were held in isolation for more than 24 hours. Three-quarters were confined for between one and three days; one-quarter was held for three to 17 days. (There was a decrease in the use of solitary confinement across all facilities from 1,021 in 2009 to 701 in 2014; that may reflect the fact that fewer youth have been placed in custody.)

Elman realizes staff in a crisis situation only have a few tools and strategies to use, including isolation, but he is convinced that prolonged isolation is never warranted. “If your hope is to help young people turn their lives around, on what planet does anybody think that putting them in a room with very little in it for days in a row is going to help?” he says. “It makes no sense.”

In compiling the report, the advocate’s office obtained data from the Ministry of Children and Youth Services and interviewed young people at all 20 justice facilities. (The information pertains to April 2009 to March 2010, and the calendar years of 2013 and 2014.) Many of the youth described “inhumane” conditions. Some said they weren’t able to shower, or that the water temperature fluctuated between extreme hot and cold. Some were not given blankets at night; any bedding was taken away during the day. They felt degraded when receiving food through a slot in the cell door. Books were prohibited. Eighty youth were denied a Bible or prayer mat. One told the advocate that solitary confinement turns youth “into crazy, mad, angry people.” Another described hearing “kids go crazy—yelling, punching walls until their knuckles bleed ’cause they can’t take it anymore.”

These revelations are especially distressing given the arguments against solitary confinement by experts in human rights, child welfare, medicine and neuroscience. The United Nations says solitary confinement, which it defines as isolation for more than 22 hours, should be “absolutely prohibited” in youth under 18, and individuals who are mentally ill. “Prison psychoses” syndrome is now established by researchers as a consequence of solitary confinement, and can cause problems including “perceptual distortions, paranoia . . . and self-harm.”

In its journal last year, the Canadian Medical Association argued that “other options” should be explored for handling young inmates, citing the potential “long-term or permanent” health effects, including altered brain activity, “depression, phobias and personality changes, which may affect the offender’s ability to successfully reintegrate into society upon release.”

To Dr. Jean Clinton, a professor and youth psychiatrist at McMaster University who has consulted on child welfare, “solitary confinement is a guaranteed exacerbation of trouble.” Many young people in custody have endured childhood maltreatment; they may be developmentally delayed, or have a mental illness or learning disability; many have experienced racism or multi-generational trauma as descendants of residential school survivors (black and Aboriginal youth are overrepresented); some have fetal alcohol spectrum disorder, or suffer from an addiction. At the same time, the brains of adolescents are not fully formed, says Clinton, so “leaving them inside a cell with nothing in it but their anger and repeating thoughts” sets them up for more problems.

Youth have a “biological drive for sensation-seeking,” she says, and interacting with others helps to form the neural pathways that create identity. Without positive stimulation and relationships, their brain development is stunted. Gratefully, the opposite is also true, says Clinton: “Neuroplasticity means that this is an amazing opportunity for change and growth.”

That is the view of Stephen de Groot, a former professor of social work at the University of Manitoba, who has developed a “relationship- and strengths-based approach” for facilities. The goal is to teach young people how to “emotionally and socially self-regulate” partly by staff modelling that behaviour. That can occur in ways as simple as eating lunch together, and as significant as having youth set personal goals to achieve. “Just by changing the focus [of their time in custody],” he says, “we see differences in kids’ behaviours.”

But change doesn’t come easily. Since 2010, de Groot has worked with both the Ministry of Children and Youth Services and many of the justice facilities cited in the advocate’s report to implement his relational approach, “but there’s a lot of resistance to it.” That’s because staff often feel their control is being taken away; some say their safety is at risk—perhaps justifiably so: they do not wear protective gear or possess weapons; their “de-escalation” tools come down to communication, restraints, isolation and physical strength. “We do have staff who are injured,” says Diane Irwin, executive director at St. Lawrence Youth Association (SLYA), a justice facility outside of Kingston, Ont., “sometimes severely.”

At SLYA it has taken two years and “many long, long sessions” with de Groot for the entire staff to “buy in,” says Irwin. Today, she says they have seen success, with youth more comfortable in custody, and staff saying their job is easier; there have only been two youth grievances, and no one has quit. Solitary confinement is still used, but that happens less often and for less time; that decision is now made by a team, including a supervisor. “My biggest point to our staff is if our ultimate goal is to help youth be productive citizens and not reoffend, you want them to pay attention to your teachings. And they’re not going to if they don’t respect you and if you don’t have a relationship with them.”

The recent changes at SLYA speak to the variability between how facilities operate. The advocate’s report showed that while serious problems with the use of solitary confinement have occurred at some justice facilities, others have rarely held young people in isolation. That reveals “a lack of safeguards that would ensure a child within one facility would be cared for in the same ways as a child in another,” says Kim Snow, a professor and child welfare researcher at Ryerson University who analyzed the report’s data. There also appear to be no indicators to suggest that young people who are more prone to aggression are relegated to certain facilities. That alone is evidence that alternatives to solitary confinement exist.

For its part, the ministry has appointed an expert panel to review its residential services, which includes justice facilities; the findings will be reported by the end of the year. It remains to be seen whether the advocate’s recommendations, including a ban on the use of solitary confinement for more than 24 hours, are adopted. In response to several specific questions from Maclean’s, the ministry replied vaguely that it “will review [the] thoughtful and important recommendations.” In the meantime, Elman says the stunning misuse of solitary confinement is akin to sentencing a young person twice: “When you put them in an institution and control every moment of every day, they’re punished,” he says. “You don’t need to make it any worse.”