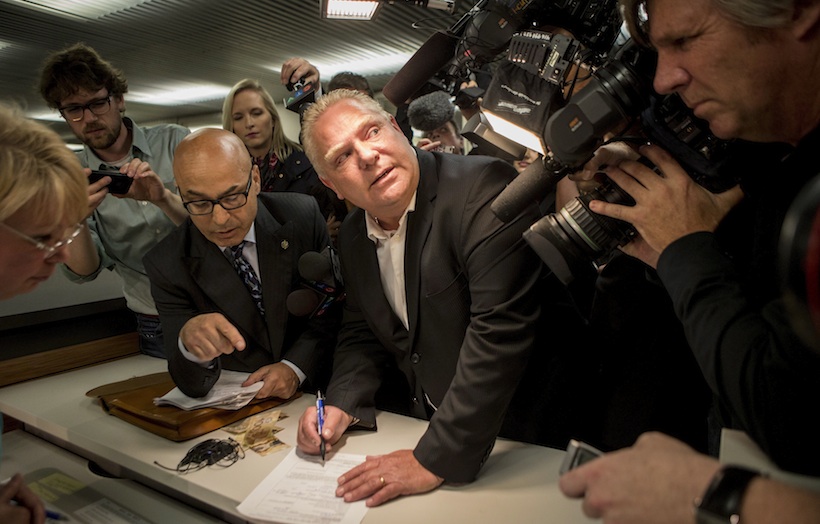 Doug Ford submits his papers in Toronto to enter the mayoral race after the withdrawal of Rob Ford. (Chris Young, The Canadian Press)

Doug, sadly for him, was right: There will be no replacing Rob Ford.

The mayor of Toronto’s re-election bid ended Friday with the news that he was withdrawing from the ballot, after doctors discovered an as-yet unidentified mass inside his abdomen.

Into his shoes steps Doug Ford, his older brother, the councillor for the sprawling, heterogeneous end of town where the Fords have their fiefdom. In what appeared to be a hastily arranged swap, Rob, from his hospital bed, dropped out of the mayoral race and then registered to run for the seat his brother currently holds.

And so the strangest political term of office that most of us have ever lived through comes to an end, with a twist that’s even more strange, and possibly tragic, than anyone would have predicted.

There’s been plenty of suspicion that this is all the result of some kind of cunning switch, in which the Fords have found a pretext to swap Doug into Rob’s flagging campaign, and carry the family to victory. Given the Fords’ inclination to lie about their private lives over the last four years, you’d be excused for your suspicions. But this kind of scenario doesn’t stand much scrutiny. Never mind that giving someone a grave illness isn’t really a viable campaign trick. Doug Ford isn’t Rob Ford, and he’s almost certainly not going to win this election.

Ford statement: ‘I’ve asked Doug to finish what we started’

What we know about Doug Ford

To those who suspect that Rob Ford was swapped out by Team Ford, it’s hard to imagine that he would back off except in dire circumstances. There persists to this day a misconception that Doug was the brains of the operation. It was never true. Rob Ford is the mayor who refused to resign when he was caught smoking crack, or when caught smoking crack again. He has pushed through being thrown out office by a judge, police investigations, global ridicule, addiction and rehabilitation. Too much baggage, you might say. But part of Rob Ford’s enduring appeal is that he endures. For his loyal base, his baggage is what keeps him afloat.

That, and his bizarre set of superpowers. Rob Ford was a singularity, a politician unlike any other. However he managed to break the law, sully his office or abuse the public trust, he emerged looking like a victim, a nice guy who just wants to help who’s been put upon by sundry demons. He seemed to enjoy nothing better than talking to citizens one-on-one, even if that never proved to be a good way to run a city.

Doug, on the other hand, has none of these gifts. He spoke well on Friday night, and is a focused worker, but he possesses none of Rob’s natural buoyancy. The joy that Rob took in using public office to speak with people one-on-one — on walkabouts, in endless phone calls, door-knocking in housing projects — is nowhere to be seen. (On one community housing visit alongside Rob, Doug was busy handing out $20 bills.) His default emotional tenor is grievance; his single driving thought that government should be more like the private sector.

Listen to the Maclean’s political team rehash the week

Unlike Rob, who usually controlled his temper in public, Doug has a tendency to go on the attack at the slightest provocation, spinning ad-libbed conspiracy theories about people out to get him, be it Kathleen Wynne or the Toronto police. This has landed him in endless trouble, having picked losing battles with everybody from Margaret Atwood (remember that?) to police Chief Bill Blair, repeatedly crippling his brother’s agenda. Doug Ford has spent the last four years waging a permanent war on everything, and losing. None of this bodes well for a high-profile campaign.

But the basic problem with Doug Ford’s candidacy is that it assumes that the Fords are a political party, when really they are a cult of personality. The Ford brand might have started with Rob and Doug’s father, but it reached its greatest heights on the strength of Rob’s compelling personality, with its strange brew of belligerence and pathos. His support might not be fully transferable in the first place.

How the world looks through Ford goggles

For Doug, winning would be a real stretch. Rob Ford was trailing badly in the polls. For all his die-hard fans, far too many Torontonians had resolved to vote for someone else — be it a two-by-four that had paid its registration fee, whatever it takes — for him to have a realistic shot at winning.

To win, Doug Ford would need to retain his brother’s fan base, and build out the coalition into other camps, clawing votes back from the progressive Olivia Chow and the smooth, reassuring John Tory, to whom voters are already warming. He will have the benefit of some public sympathy, but there is little indication the public is clamouring for either a charmless Rob Ford, or an angrier, less coherent John Tory.

Doug’s arrival could still have unintended consequences for the rest of the race, especially for John Tory. Tory had only just hit his stride as a genial-but-cutting critic of Rob Ford. The switch-up gave Olivia Chow a chance to let her more sympathetic reaction resonate. The disappearance of Rob Ford might also dislodge strategic voters from Tory’s camp.

But none of this helps Doug Ford, and barring events even more unforeseen and outlandish than the ones that have already occurred — and at this point, we’re talking about a volcano erupting under a debate — he’ll face an uphill battle for a job he doesn’t seem convinced he wants.

For his part, Rob Ford is almost certain to be re-elected in his old ward, despite high-calibre candidates like Andray Domise, who are contesting it. He will be spared a stinging rebuke from voters, many of whom have waited long years to deliver it. If Rob recovers and returns to council, you can bet the bottom dollar of your councillor’s expense account that he’ll soon be busy printing up the signs for Ford 2018. Doug can run, but there is no replacing Rob Ford.

Today in the life of Rob and Doug Ford