Google has made it possible to explore Vimy Ridge via its Street View tool. Here's why they did it. 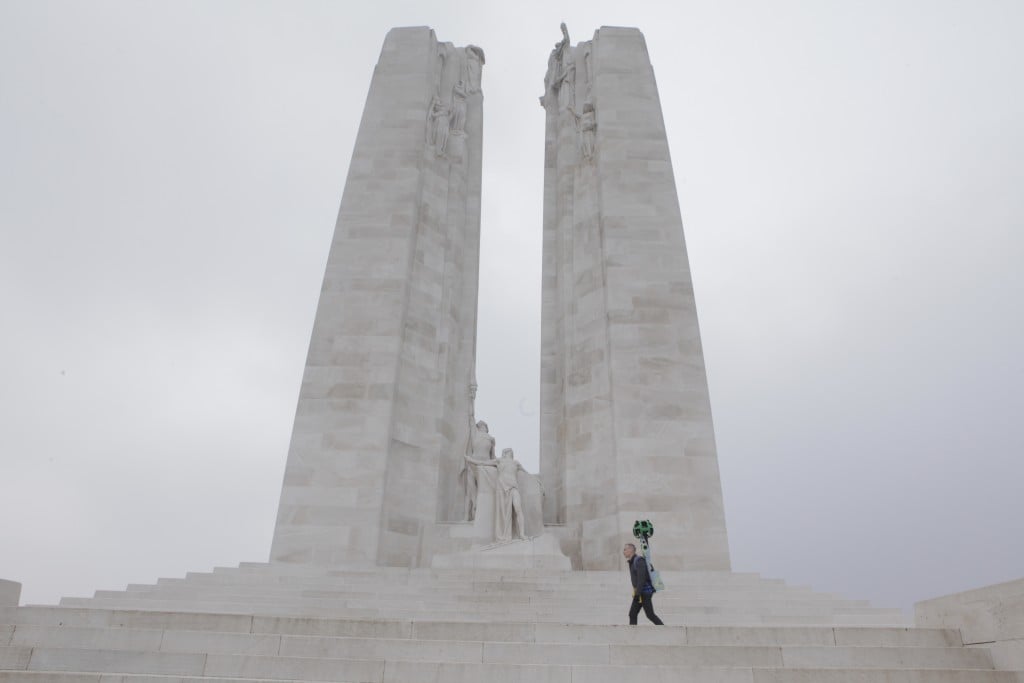 Over two trips—one in late fall 2016 and then again this February—Google mapped Vimy Ridge. Using what they call a “trekker,” a backpack-style device equipped with 15 cameras, an accelerometer, and a gyroscope that takes 360-degree photos, they walked through the trenches, tunnels, and monument that so many Canadians have read about in their history books for decades.

Aaron Brindle, head of public affairs at Google Canada, did some of that walking. I chatted with him Friday about the project.

Q: So let’s talk about mapping Vimy Ridge. This is cool.

A: Yeah, I mean it’s interesting for me personally. I’ve been at Google for six years, and when I first came here… one of my passion projects was building the maps of Canada’s North. I became completely obsessed with it, and it’s still kind of ongoing. And I’m also a student of Canadian military history, so I’d always wanted to go to Vimy, because I’ve always thought of it as kind of like a small part of Canada in Northern France—I mean, literally it’s been granted to Canada in perpetuity by the government.

Q: It’s very interesting, even as someone who’s been there and seen it up close. So, you, personally wanted to do this. Google, as an organization, why did they see value in this project?

A: I think there are a couple things there. Just broadly speaking, this falls under Google Maps to a certain degree. Google Maps has a very broad mandate, and that is to build the world’s most accurate and comprehensive map. And I think an extension of that is reflecting back—here in Canada—to Canadians their world. It’s been interesting as we’ve kind of built out this collection—Canada’s North, and now Vimy—it’s quite moving to see yourself in this kind of imagery.

One of the most powerful things about having imagery associated with modern-day cartography is that it’s not always about exploring what’s over the horizon, which is what traditional mapping always was about. I think this kind of mapping really does offer another lens through which to kind of see your own kind of community, your own country, to a certain degree your own story, reflected back.

We’re so familiar with these stories, like we’re familiar with Canada’s North, but it is another way to kind of experience our own culture, our own identity.

Q: Was there anything about it that you didn’t expect to come across, or feel?

When you read about World War One, it was such an intimate war in some ways. In some cases, you’d have huge battles fought for a matter of metres.

What was interesting about this collect was that we could put on this trekker and walk from what were the Canadian lines, go up out of these preserved trenches, walk across No Man’s Land, probably about 20 metres, maybe less, and then turn left and walk through the German trenchworks. You can virtually do that now, in Google Maps, and having that kind of scale reflected I think is really important in understanding what this was.

We walked up out of that trench—it was misty, cold—and so it was very atmospheric, but what was cool was when you walked through No Man’s Land, on either side of you, you have this landscape that is just, still, totally devastated. You might remember from when you were there: how dramatic these kind of divots are from the shelling, and it’s made this permanent impression on these battle fields, and you really get that perspective, I found, as you’re walking through. It’s 100 years later and you can still see that devastation. You can only imagine what it would have taken to alter the landscape in that way.

Q: What about unexploded weapons or ordnance?

A: We worked very closely with Veterans Affairs—they worked really, really hard with us. They were very clear about where was appropriate for us to collect imagery. Because it was in partnership with land that they’re managing, we went where they basically told us to go. Whenever we’re off public roads, and we do these kind of partnerships, we almost always defer to the partner, in terms of how they would like to see this land reflected back to Canada.

Q: So does that mean there are parts of it that haven’t been mapped?

A: We certainly didn’t go off—we didn’t go off the trails. For good reason. I mean, you can see, still, they have those warnings about unexploded ordnance. We had to kind of stick to what’s been deemed safe, for sure.

Q: Are there plans for you guys to do this in other places? Dieppe comes to mind.

A: As a student of Canadian history, particularly military history, I would like to. If you thinking about parts of the world that are important to Canada, so much of it is obviously within our own borders, but there are those pieces of geography—distinct pieces that represent so much. Vimy is certainly one.

The reality is that there are all kinds of places in Northern Europe where it might be relevant to explore this. Just for World War One, we’ve also captured Street View imagery from Beaumont-Hamel, which is particularly relevant for Newfoundland. We’ve captured imagery from Hill 145—there are a few places where we’ve started to do some of that.

We approached this as an opportunity to reflect back to Canadians a small part of our geography. It’s the opportunity to visit what was—at least in the textbook I would read in university—this was just a dot on a map that was two-dimensional, just squiggly lines. And so this is a chance to actually explore, understand, and to a certain degree, experience, a small geographical data point. I think these kinds of products are what we’re going to continue to do in Canada; this one felt particularly special to me.

This interview was edited and condensed for clarity.