Why the B.C. Liberals should suck it up and offer a Speaker

Voters have decided how they want the assembly divided. Why undermine the tradition of a non-partisan Speaker? 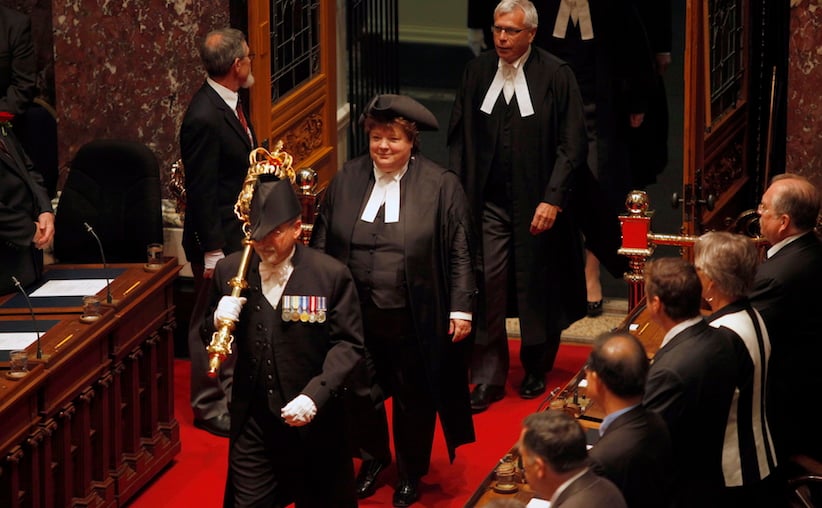 Linda Reid, the most recent Speaker of the B.C. legislative assembly, arrives for a session THE CANADIAN PRESS/Chad Hipolito

With grins and a handshake, John Horgan and Andrew Weaver ended four weeks of mystery over who would govern British Columbians—it will be Horgan’s NDP, with Weaver’s Greens propping up the minority. Christy Clark, known for bringing a chainsaw to a knife fight, appeared to be willing to let that end her six-year premiership: “Should the government fail the test in the house, as seems likely, I would be given the job of leader of the Opposition. And I’m more than ready and willing to take that job on,” the Liberal leader told reporters that same May 30, flashing the assembled cameras a few subdued smiles.

But in a caucus meeting that same day, Liberal MLAs decided to drag out the fight Clark appeared to cede. Her 43 members agreed that none of them would stand for election as assembly Speaker, meaning they expect one of the 41 New Democrats or three Green MLAs to be the legislature’s daily referee. As if a minority Green-NDP government wouldn’t provide enough calamity and uncertainty for Canada’s third-largest province, a governing-side Speaker would mean constant brinkmanship and white-knuckle tests, in a 43-43 deadlocked assembly that would routinely need tie-breaking votes by the Speaker.

Clark has grown used to taking every advantage of the rules to benefit her side, most notably by preserving and reaping the full, absurd benefits of a campaign finance system that let Liberals attract unlimited donations from foreign corporations, wealthy individuals and lobbyists. The province’s conflict of interest commissioner had a son working as deputy minister to her cabinet, while one of Clark’s key campaign advisers this spring simultaneously served as B.C. Hydro chairman, by her 2015 appointment.

If Clark is indeed ceding control of government, she should at least let the new guy and his Green sidekicks govern with some form of stability, and encourage one of her members to become Speaker—ideally incumbent Speaker Linda Reid (or one her former cabinet ministers, if they really miss the sort of plumped-up salary that comes with a ministerial or Speaker’s job).

The alternative is needlessly messy, in what could already be a messy government with a healthy-sized opposition.

COUNTERPOINT: Why B.C. should just hold another election—right away

The uncodified convention in Canadian and other Westminster-style legislatures holds that the Speaker votes against felling a government, and to continue debate. But in this case, should B.C. wind up with a non-Liberal Speaker, that would require convention to be broken on the first key vote once the assembly is recalled: on the Throne Speech that Clark has essentially admitted is doomed to fail.

“The Speaker would need to act contrary to his or her conventional role, not only to make the Clark government fall, but also to pass vital legislation and supply for a Horgan government,” says Philippe Lagassé, a Carleton University political scientist who specializes in Westminster institutions.

“It’s important to note, though, that convention is flexible for a reason. In a situation such as this, bending the rule would likely be necessary for the legislature to function.”

Saying that conventions are flexible for a reason, though, isn’t the same as saying guidelines were meant to be broken. While there’s nothing in law preventing an NDP Speaker from being an eager foot servant to a Premier Horgan, such a scenario would cause the institution reputational damage that might carry beyond this looming carnival of political anxiety.

In 2003, New Brunswick elected the last razor’s edge assembly, 28 Tories, 26 Liberals and one NDP; a Tory served as Speaker; one columnist suggested Bev Harrison was “the most partisan Speaker in the history of the New Brunswick legislature.” In late 2005, Harrison voted to kill an opposition health bill on second reading, cutting off debate duty actually required him to sustain. Amid Liberal caterwauling, he refused to provide a reason for his tie-breaking vote. Months later, he quit the chair for then-premier Bernard Lord’s cabinet, and his successor was an Independent MLA who subsequently crossed the floor back to the Tories while still playing his supposedly non-partisan role.

That legislature survived for three years before an election, with Lord’s nimble management of his second term. Horgan, trying to navigate as rookie B.C. premier, would struggle to manage so well and let one of his members perform the Speaker’s role as truly honest broker.

Aside from dealing with a split assembly, the new premier will face overwhelming challenges that will threaten B.C.’s economic and social health: the unrelenting opioid crisis, the latest round of U.S. softwood lumber disputes, possible NAFTA renegotiation, the Lower Mainland home-price mess and the NDP’s and Green’s own fights against pipelines and other energy projects. Clark and the Liberals may deplore how the left-wingers preside over this collection of challenges, but they need not add to those headaches with a gummed-up political works that can scarcely pass legislation.

RELATED: What the B.C. NDP-Green deal means for the rest of Canada

An assembly with a Liberal Speaker and 44-42 MLA split will hardly be a model of parliamentary stability. If one NDP minister is in Quebec City for a national meeting and another member is with his newborn child, the deadlock is suddenly back (assuming there’s no pairing-off agreement). When bills are at committee stages, and a deputy Speaker is NDP, it’s a closer 43-42 split.

The other alternative is the disaster scenario of 1908 Newfoundland: neither side offers up a Speaker, the assembly cannot meet, and British Columbians are thrust into another election. The last one cost $44 million. Facing that cost shouldn’t be a dealbreaker in a province that spends $52 billion per year. But what occasion would there really be for a new election besides partisan stubbornness? Voters decided what division of Liberals, New Democrats and Greens they preferred, and those members have decided how to arrange themselves. The parties owe more to voters than a chance to change those voters’ minds a few months later.

Will the NDP govern well? That’s up to Horgan and, to a large extent, Weaver. Will they be given a chance to govern well? The Liberals can continue their hyper-partisanship and deny them that chance. Or if they’re so confident the Green-NDP deal will be a political shambles, they can let them rise and fail by themselves.