Why Viola Desmond stood up to racism in Nova Scotia

A Q&A with law professor Constance Backhouse about Viola Desmond's arrest, trial and little-known fight for racial justice in 1946 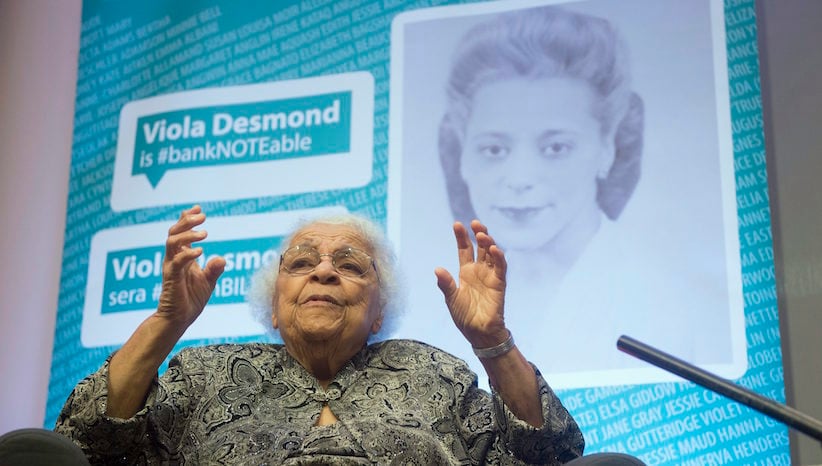 Wanda Robson speaks about her sister, Viola Desmond, during an interview in Gatineau, Quebec on Thursday December 8, 2016. THE CANADIAN PRESS/Adrian Wyld

On Thursday, the Bank of Canada announced that the first Canadian woman on a banknote will be Viola Desmond, a black Nova Scotia woman who refused to leave the whites-only section of a movie theatre in 1946. Her dignified stand against racism—a decade before Rosa Parks—is a curiously little-known part of Canadian history. Maclean’s spoke to Constance Backhouse, a law professor at the University of Ottawa who has written extensively about Desmond—and attended the ceremony at the Canadian Museum of History announcing her selection for Canada’s new $10 bill.

Q: Can you tell me about the work you’ve done on Viola Desmond, and what got you interested in her story?

A: I was doing research on the role that Canadian law has played in the history of our country in terms of either promoting racism—supporting it, backing it up—or helping to dismantle it. I got drawn into quite a number of cases where individuals who wanted to get service in restaurants and theatres and other places in Canada that were segregated went to the courts. A number of them tried to seek damages. There were one or two victories, but mainly they lost. I found Viola Desmond was the first woman whose case was taken up in the courts, and it wasn’t that she tried to sue them for throwing her out of the theatre; it was that they took the law and used it to arrest her. That was really shocking to me. We had no laws in Canada actually requiring segregation, like they did in the United States. But here we had people using the law—the amusements tax act—to enforce segregation, and our courts allowed them to do that.

Q: Who was Viola Desmond, outside of this experience in the theatre: what was her career and life before this incident?

A: She was born in Halifax and she came from a family that would be described as very middle-class within the black community. She was reasonably well-educated, she did high school and then was teaching in a segregated black school in Nova Scotia. And then she decided to branch out into business and she took training as a hairdresser in the United States and in Montreal because no one would train a black woman for hairdressing in Nova Scotia. She had to go further afield and she did, she was ambitious. And she came back and she not only set up a very successful salon—she called it a Studio of Beauty Culture—but she set up a school to train other black women, and they came from all over eastern Canada to train with her and be able to open their own salons. In addition, she began to market her own hair products and cosmetics.

It was when she was driving her supplies down into other areas in Nova Scotia that her car broke down (in New Glasgow). That caused her to say, ‘Oh, I might as well take the evening off,’ and off she went to the theatre.

Q: Walk us through what happened in the theatre and the immediate aftermath.

A: There was seating on the main floor and seating in the balcony, and she wanted a seat on the main floor because she couldn’t see well. The ticket agent sold her a ticket and she was going to the main floor when they called her back and said, ‘No, no, you don’t have a ticket for that.’ So she said, ‘I must have bought the wrong ticket.’ She didn’t know that the theatre was segregated. And she went back to the wicket and said, ‘I would like one down please.’ And they said, ‘No, we can’t sell those tickets to you people. You have to sit in the balcony.’

So right then and there—this was spontaneous, it was not something she’d thought about—she went and sat down on the main floor. Her thinking at the time, we discovered later, was that she was a very respectable person and she wasn’t doing anything wrong or causing any trouble, and that they would leave her be.

But they didn’t. They called the theatre manager, who called the local police, and a police officer came in and the two men—white, burly men—dragged her out of the theatre. In the scuffle, she lost her purse and a shoe, and they dragged her off to jail, they locked her up and she spent the night in jail.

Q: What was her experience in court the next day?

A: Nobody told her she could hire a lawyer, and you can imagine her complete mystification to discover that she was being charged for tax evasion for failing to pay one extra cent on the theatres and amusements tax. The main floor tickets were something like five cents more than the ticket for the balcony. They wouldn’t sell her a main floor ticket, and so she only had a balcony ticket, which means she had paid one cent less in tax.

So the white ticket agent took the stand and said she didn’t have a ticket for the main floor and sat there anyway; the manager got up and said the same thing on the stand. In the end, she was convicted and fined.

Q: Why was this handled the way it was, with the underlying racial context so conspicuously ignored?

A: It’s so Canada. On some level, you laugh, but on another level, it’s just depressing. We pride ourselves: We’re not like the bad old U.S.A. where they had segregation, whites-only fountains and washrooms and hotels. We think we were the capital of the Underground Railroad, we were the place to where the slaves escaped, we were a much better country. But in fact, some of the black people in Canada at the time said, ‘You know, it’s actually much easier in the United States because you know which hotels, restaurants, theatres won’t let you in because the signs are there. In Canada, you never know.’ And in Canada, it changes over time. Sometimes there was a complaint by a group of white customers (or) new theatre management and they changed the rules.

Viola Desmond was no stranger to segregation. But she didn’t know that theatre was segregated and she was shocked to discover it. There was a sort of interweaving of rules that changed over time and place. It was very complicated to figure it out. And then, when you look at the law, we didn’t even admit to it, we just hid it. When I first came across this case, I thought it was tax evasion.

Q: You’ve written that, “If Viola Desmond had not taken any further action in this matter, the surviving trial record would leave no clue to the real significance of the case,” in terms of the racial discrimination. That’s quite amazing and disturbing.

A: We hide our racism. We just go on about our lives—may I say, white Canadians go on about their lives. African-Canadians understand racism, Indigenous Canadians understand racism: they see it all the time, they live with it. But white people are so unappreciative, they don’t even acknowledge and understand what it means to be white in Canada, and all the layers of privilege that come with that. So they’re shocked when somebody says, ‘What just happened is racist,’ and they said, ‘Oh no, couldn’t possibly be.’ They see racism as people with KKK gowns and pointy hoods with eyes cut out. And we had those too.

Q: So back to Viola’s story: after she was convicted and fined, what did she do next?

A: She came back to Halifax. She was very upset, I think in part because she was such a respectable person within her own community. She was really looked up to—she was impeccably dressed and her makeup is always perfect and her hair is perfect and she’s very ladylike. I think she just felt that this was an outrage. We should be clear: this is an outrage to anybody. But the fact that she was middle-class, a successful businesswoman and somebody who was really revered within her community gave her the self-confidence to fight back.

She spoke to her minister and the minister’s wife, and a lawyer and a doctor. They decided she should contest the conviction. The lawyer initially was hoping to not only get the conviction overturned but also to make a claim for damages because she’d been hurt—she’d been bruised and injured in forcible ejection—and had to spend a night in jail. Ultimately, all of those possible legal actions failed at the hands of an all-white, all-male judiciary. So it’s a very damning indictment on the Canadian legal system. I would guess that every single one of those judges knew exactly why she had been arrested.

Q: How did her lawyer tackle this case?

A: He never once raised the issue of race. So he tackled it on technicalities: the wrong process had been used, there were mistakes in procedure. He never once mentioned that they were using this theatres and amusements tax act for a purpose for which it had never been intended, and that was wrong and could have been overturned. Maybe he knew the judiciary and knew that if he raised race, it would only harm his case—that’s a possibility as well. From my perspective, I think he should have raised the racism. He should have put that into the public realm, since everybody knew that’s what it was.

The lawyer was white, everyone in that judicial system, in the legal system, in policing: they were all white. Imagine being the only black person in the room as she was in that courtroom—looking at that and hoping against hope that somebody up there is going to listen to what went down and react in a fair and reasonable manner, and then being betrayed.

Q: Why is it that Viola Desmond’s story has been so little known, even in Canada?

A: Partly it’s because it was a tax case; it took a long time to find this one. I found it when I was doing this legal research on racism because one judge said this was a Jim Crow kind of action. So I was twigged to that, and then I went back to the original documents and found all of the background. The Nova Scotian black community always remembered Viola Desmond—they didn’t lose track of her, ever. Her memory was very much alive there, but the rest of us didn’t know anything about her.

It’s just so typical of Canadians that we know Rosa Parks, in that “bad country to the south of us”—they needed this lovely, courageous woman to sit down in the front of the bus—but we wouldn’t know ours, because of course we “don’t have racism in Canada.”

What’s exciting, especially in the horrible times we’re living in right now, is that this feels like a moment of inspiration. It’s actually somebody (who) fought back, and she fought back in a way that can make so many of us proud. She lost, but she left a record of what she did. In history, who comes out the victor here? She does, and not all those white people who behaved so despicably.