Why won't Wayne Gretzky pick up his Order of Canada?

The Great One was awarded Canada's greatest civilian honour in 2009. But he hasn't found time in his schedule to make the trip to Ottawa. 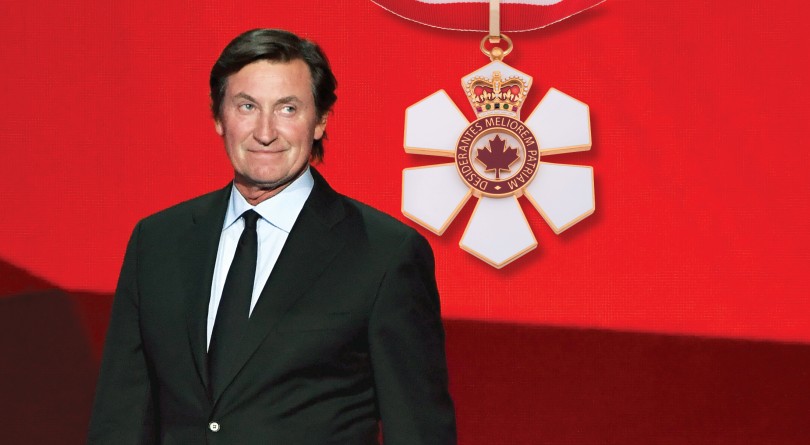 He’s the Great One, perhaps the best hockey player the world has known. Every few years, his name is bandied around as a possible governor general. His 2002 induction into Canada’s Walk of Fame mentioned his love of Canada. Yet it appears that love has its limits.

In May 2009, Wayne Gretzky was awarded the nation’s highest civilian honour, companion of the Order of Canada. He’s never picked it up.

“It’s just embarrassing,” says Christopher McCreery, an expert on the Canadian honours system. “I’ve probably met 1,000 recipients of the Order of Canada. It’s a highlight of their lives—their country saying thank you.” To make the decision not to collect the insignia is “insulting to the others who get them. All are supposed to be in the same category, yet they think they are on a plane above everybody else,” says McCreery, who has written 15 books on honours, including his latest, The Order of Canada: Genesis of an Honours System, which has a foreword written by Queen Elizabeth II.

READ MORE: Wayne Gretzky on the love of his life

He points out that the current nine-year wait is not even a record for Gretzky, who lives in California and has dual citizenship. Fourteen years after he was awarded the lower rank of officer of the Order of Canada, Gretzky finally got around to collecting that insignia—but not at a public investiture, where he’d have to watch as other worthy recipients claimed their own honours. Instead, Gretzky, then a New York Ranger, in town to play the Senators, dropped by Rideau Hall in 1998 to get it at a private ceremony with then-governor general Roméo LeBlanc.

When Maclean’s first asked Gretzky’s representative in 2015 why the retired star hadn’t collected the honour, agent Sam Galet said Gretzky had trouble fitting an investiture into his schedule. It’s not like there weren’t opportunities: investitures are held four times a year, so, by then, there had been around 24 ceremonies at Rideau Hall in Ottawa at which he could have claimed the insignia—a six-point white enamel snowflake with a stylized maple leaf at its centre bearing the order’s motto, Desiderantes meliorem patriam (“They desire a better country”), as well as a royal crown.

Galet promised that they would “try” to pick a date for Gretzky to claim his nation’s highest civilian honour. Now, three years and another dozen or so investitures later, Gretzky is still a no-show. “Mr. Gretzky has not yet had the opportunity to attend,” Sara Régnier-McKellar, communications adviser to the secretary of the Governor General, states tactfully. This time, no excuses were offered: repeated calls to Ira Stahlberger, Gretzky’s current agent, who is based in Chicago, were not returned.

“If you can’t pick it up within five years, why bother to accept it?” grumbles McCreery. After all, he points out, it wasn’t something suddenly thrust on Gretzky. That’s not how the honours system works. All potential nominees for the Order of Canada are told in advance of any announcement that officials are recommending to the governor general that he or she get a specific honour, and then they’re asked if they would accept it. Only on that approval would a press release go out. After that, vice-regal officials go out of their way to accommodate recipients’ schedules in planning the investitures. Special ceremonies outside the nation’s capital can be arranged for those who can’t make it to Ottawa, usually for health reasons.

Based on precedent, McCreery says officials would have attempted to schedule Gretzky’s investiture a dozen times. “They try really hard with the companion level. It’s the pinnacle for Canada.” Rideau Hall even covers travel expenses for the recipient and a companion, explains Régnier-McKellar.

Gretzky isn’t the only hockey player to accept an Order of Canada then never pick it up. The worst offender is Phil Esposito, who was appointed to the officer rank in 1972 but never collected it. “The GG who appointed him is dead,” McCreery says with more than a touch of irritation. Bobby Clark was similarly awarded in 1981, but never collected.

Gretzky, Esposito and Clark get to add “C.C.” or “O.C.” after their names even though they’ve never collected the insignia. As honours expert McCreery explains in his new book, an advisory council suggested in 1993 that appointees “not be able to use the postnominal initials until after their investiture,” but the idea never went anywhere.

In seven months, Gretzky’s honour will have gone uncollected for a full 10 years. By tradition, gifts for that anniversary are made of tin or aluminum. A white enamel snowflake—should the Great One care to collect it—could seem generous by comparison.