Will I get a ‘contact high’ just walking down the street?

Exhaled smoke contains so little THC that you’d need to sit in a room with 16 joints being smoked per hour in order to show any signs of being high. 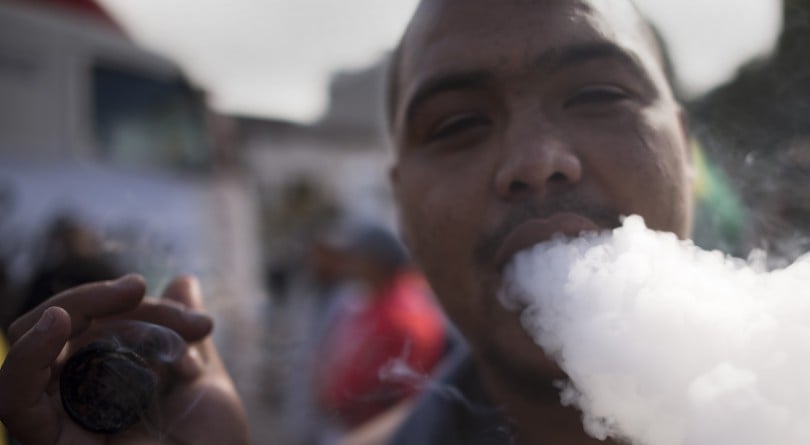 A man exhales smoke as he smokes marijuana out of a bottle-neck pipe. (Photo: RODGER BOSCH/AFP/Getty Images)

A contact high—accidentally getting high by breathing second-hand smoke—isn’t easy to achieve. Ross Rebagliati, the Canadian Olympic snowboarder who famously blamed his positive drug test on a contact high from a pot-fuelled party he attended, was widely mocked for his explanation. Exhaled smoke contains so little THC that you’d need to sit in a room with 16 joints being smoked per hour to show any signs of being high, says the National Institute on Drug Abuse in the U.S. Maybe that’s normal for snowboarders, but most of us aren’t likely to see that many joints at once. And even if you’re suddenly feeling groovy, that’s almost certainly the placebo effect; all evidence points to the contact high being a psychological rather than a physical phenomenon.

That said, tokers should not light a joint anywhere they couldn’t smoke a cigarette, including patios and public parks. “In Ontario, use will be restricted to private residences for the most part,” says Daniel Bear, professor of criminal justice at Toronto’s Humber College. “This includes front porches and backyards, but it seems most every other location will be prohibited.”

If you’re a renter, can your landlord veto your hotbox? Probably. Condo boards “are moving pre-emptively to ban the growing and consuming of cannabis in properties, and landlords are adding such clauses into new lease agreements,” says Bear, who suggests these strict formal arrangements would be better replaced by a social contract: respect thy neighbour.