'You are the Weird Mom'

‘You are the Weird Mom,’ whispered my daughter. “There’s one on every tour and you are it.” 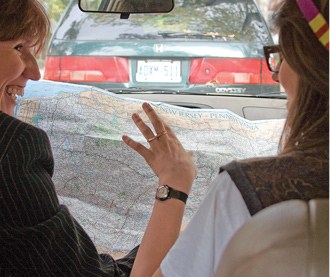 The first stop on the university road trip that my 17-year-old daughter Hayley and I took in August probably shouldn’t have been my alma mater, the University of Virginia. Her uni tour wasn’t about me. At least, that’s what I kept telling myself.

I’m an American who has spent the last 16 years living in Toronto, raising two Canadian children. I’ve grappled with the politics (you don’t vote directly for the prime minister?), the history (you won the War of 1812?) and the baffling modesty (hey, the pursuit of happiness is my inalienable right). So I’ve long imagined that when Hayley applied to universities, some would be in the States. She spent her first year in Los Angeles, and I thought she should experience what it’s like to live in her birth country rather than next to it. But because even I have figured out that Canadian universities deliver an equal education at a much lower cost, I posited that the only schools worth heading south for were the Dream Team, the super-high-end institutions that offer the moon—and, not incidentally, generous financial aid.

Hayley doesn’t have a particular school or subject focus yet; her objective is a wide-ranging liberal arts education. So we took the loose approach: we’d pack a credit card and a stack of CDs, chart a course—the University of Virginia, Georgetown, Yale, Brown, McGill, Queens—stay in roadside motels, and see what happened. What happened was this: Hayley displayed the usual anxieties about Getting Into University and Starting Her Future. And I decided that the best way to help her through it was to go barking mad.

It began three minutes after we pulled into Charlottesville, home of UVa. Okay, so I may have been driving a tad erratically, making screeching U-turns whenever something caught my eye. And it’s possible that my running commentary—“Oh my God, they knocked down my dorm!”—was more fascinating to me than to her. (I graduated in 1984. Things changed. Duh.) But I thought she might perk up as we walked the leafy, colonnaded campus built by Thomas Jefferson in 1819 with bricks from his works at Monticello. (I’d been a tour guide there, so I was full of fun facts.) I showed her my favorite deli, where I was—perhaps inordinately—pleased to see that “my” wild turkey sandwich was still No. 1 on the chalkboard menu. I was expecting her to be charmed by the things that had charmed me (“Isn’t it cool that Jefferson made the library the quad’s focal point, when at other schools it’s a church?”). But no matter how hard she tried, she couldn’t quite hide the “Yes, but can we go now?” in her voice.

It should have been a reminder that my daughter isn’t mine anymore, and hasn’t been for a long time. Eventually, Hayley articulated what she was feeling: she wanted to like my school, for my sake. But another part of her wanted to dislike it, because she wanted to make a different choice, live a life different from mine. You’d think I’d have been able to figure that out.

Our next stops were better. Georgetown, in Washington, was chockablock with political internships and study abroad programs—all of which Hayley realized she wanted, the minute she saw it. The school also guarantees residence for all four years, some in chic row houses that—okay, sue me—I would die to live in myself. Brown students design their own curriculums from a mind-blowing spectrum of subjects. And at Yale—ohhh, mommy really wanted to go to Yale. No class has more than 30 students, there’s a Gutenberg Bible in the library, and a master who lives in each freshman dorm arranges intimate teas for the students with guests like Bill Gates and Denzel Washington. At one point during the Yale speech I smacked my hands audibly against my face in wonder. “You are the Weird Mom,” Hayley whispered, pretending to edge away. (I’m sure she was only pretending.) “There’s one on every tour and you are it.”

Still, we could be a good team. She’d dole out my road food, and we’d alternate CDs, playing each other songs that meant something to us. (Father and Son by Cat Stevens: Hayley was bemused to find out that I, too, had once related to the lyric, “From the moment I could talk, I was ordered to listen.”) We figured out that it’s wise to attend both the formal information sessions and student-led tours, and that they fill up early. We developed an attack strategy: snag a nearby hotel room the night before, scope out the campus in the morning, and hit the road by lunch.

Unfortunately, we also learned that every other family on our uni route not only knew all that already, but they’d been planning for it for months, if not years. We kept seeing the same faces—the humble father from Guatemala and his dazzling son who spoke fluent Mandarin—who came equipped with hotel reservations and restaurant lists. They’d mastered the lingo. (Did you know that a student entering Grade 12 is called a “rising senior”? I didn’t.) They’d memorized the school stats and entry requirements, and rattled them off like Gatling guns: the Ivy Leagues like to see a 2,200 (out of 2,400) on the SAT, and high 700s (out of 800) on the SAT 2’s (individual subject tests). Alternately, you could skip the SAT and take the ACT, but then you’d need to brush up on science, not vocab. Apply for early decision to indicate your commitment, but only to schools that resubmit your application if the early decision is no.

I was overwhelmed. (Not to mention irked: would it kill Canadian high schools to give Grade 11 students information about applying in the States, so they could have the option?) Back in 1980, my “approach” to school selection was akin to picking names out a hat. There were no such things as SAT 2’s, I’d never heard of the ACT, and no one took me on a uni tour. Many of these parents, by contrast, were towing kids who were entering Grade 11. And some were entering Grade 10. Yikes. I’d forgotten what a big business university is down south. These kids (and their parents) wanted a capital-f Future, and they were charging in to get it like Rommel into Egypt.

Hayley is a dedicated student, she has what the U.S. admissions folks call “competitive” grades, and she’s always displayed a keen self-knowledge about which schools were right for her. I could see that two universities in particular had lit her up. But she’s also hard on herself, and when confronted with a mob that is storming toward something, her inclination is to pull back. So I shouldn’t have been surprised when she announced that she liked the U.S. schools. Loved a couple, in fact. But she wasn’t sure she would apply.

I hit the roof. Literally: I smacked the roof of my car. I wedged myself into my fallback position—guilt-inducement, learned at my own mother’s knee—and stayed there, loudly. At one point I heard myself hollering, “You are making this decision out of spite! You will regret it for the rest of your life!” and I saw how ridiculous I was. But I couldn’t stop.

In the miles of silence that followed, I had to own up to it: perhaps some of that, um, passion was my own regret talking (all right, yelling). I didn’t make the most of my university years. I cared too much about landing a job, and not enough about enriching my mind. I would love to have that time back, to do it more fully and without fear.

But mostly it was about my daughter, and my profound hopes for her. At schools on both sides of the border, my eyes kept filling with tears, not because I’m hormonally challenged, but because the belief that one should dream as grandly as possible moved me. At 48, I know something Hayley doesn’t: most people end up living smaller lives than they’d imagined. I want her to live the biggest life she can.

In early October we were on the road again, driving to Buffalo for Hayley’s second stab at the SAT. We laughed (sort of) at my August histrionics. Hayley told me she’d made her decision: she was applying to Canadian and U.S. schools—not because I wanted her to, but because she wanted to. She’d be thrilled to be accepted into any of them, and she hopes I’ll be thrilled for her. (I will.) She wants to attend a university that “scares me, but in a good way.” And what impressed her most about her uni tour was the number of people who cared deeply about where they went to school—how much they yearned for it, how hard they worked for it. “I saw how many people really value their education,” she said. “I want to value mine that way.”

I could be letting myself off easy, but maybe every university tour is fraught. Maybe it’s meant to be. By the time our children are on it, they’re not children anymore. They’re adults, making the first major decision of their adult lives, and we parents have to stand down and let them. It’s Hayley’s road now. I’m just glad to be along for the ride.