‘I want more young people getting into politics’

Pierre-Luc Dusseault is the youngest MP in Canadian history

During the campaign for the 2011 federal election, the NDP could not find a candidate to run in Sherbrooke, Que.—after all, there was nearly no chance of a win. So someone from party office called the riding association president and asked if he’d be willing to put his name on the ballot. Pierre-Luc Dusseault, a first-year politics student at the University of Sherbrooke, took a day to think about it and then said yes. A month later, at the age of 19 years, 11 months and two days, he was the youngest person ever elected to the House of Commons, the first teenager in Parliament’s history.

This was, in part, coincidence. “If the election had been five months later, I wouldn’t have this record,” he notes, having bested former Liberal MP Claude-André Lachance (elected in 1980) by four months and a day. Still, it was history. And, at least so far as it might be hoped that the House would accurately reflect the country, it was not without meaning. “I’m proud of that,” Pierre-Luc says, “but I’m also hopeful that this will be beaten at some point, because I want more young people involved and getting into politics and being candidates.”

Pierre-Luc became interested in politics while studying at a CEGEP in Sherbrooke. He was drawn to the NDP and its leader, Jack Layton, so he got involved in the local riding association. Later, he started a campus club at the university. During the 2008 election, the New Democrat in Sherbrooke finished fourth with 13.1 per cent of the vote—the best showing for an NDP candidate in the riding’s history. By the next election, the mood had shifted, and by the morning of May 3, 2011, there were 59 New Democrats elected in Quebec. Nineteen of them were under the age of 30, including four McGill students and, famously, an assistant pub manager named Ruth Ellen Brosseau. 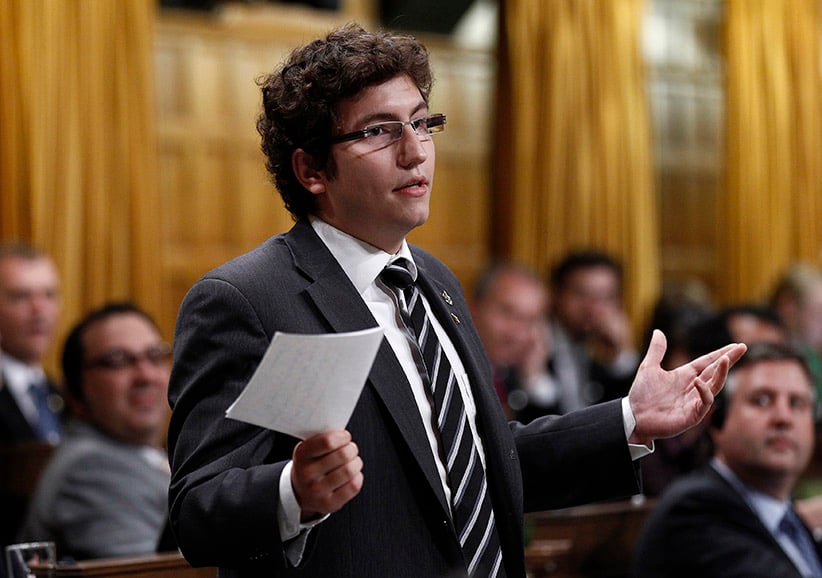 Dusseault, is Canada’s youngest MP, and was re-elected in 2015. (Chris Wattie/Reuters)

However accidental those victories, the face of Parliament was changed. “It helps us, as young people, to add our voice to the national debates—give our perspective and our vision on what should be a priority,” Pierre-Luc says. “The decisions we make today will have an impact on us for decades, compared to some others who are older and maybe don’t take that into account as often as we do.” Pierre-Luc says he is particularly well-received at seniors’ centres—the residents apparently happy to see a young face in politics. Less than a year after being elected, he was named chair of the House standing committee on access to information, privacy and ethics. His constituents gave him another vote of confidence in the 2015 election, making him one of the few remnants of the 2011 Orange Wave.

With his election, he was compelled to put aside his formal education. It’s not clear when he might be able to resume his studies—he says he’s happy to be an MP for as long as voters are willing to let him. But when he gets back to school, he thinks he’ll study law. A degree in politics would seem rather moot now. – Aaron Wherry