Cape Town: What happens when a city of four million runs out of water?

South Africa's second-largest city looks down the barrel of 'Day Zero,' when it will officially turn off the tap 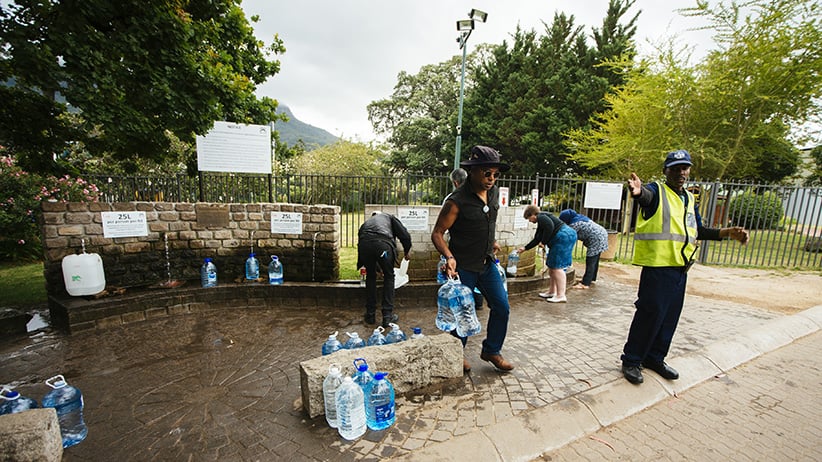 Cape Town is in a race against time. Dams are draining. People and businesses face fines for wasting water. Construction companies are building desalination plants and a recycling centre, while drilling to access ground water.

South Africa’s second biggest city is going through one of the worst droughts in recent decades, with lack of rain and a surge in population rapidly depleting the municipal water reserves. In a few months, it could run out, bringing about what the city has apocalyptically dubbed “Day Zero”—when officials are forced to turn off the tap because there’s just not enough water left in the reservoirs to keep the system running.

If it happens, a city known for its rich and complex history, diverse population and lush national parks will start sending its four million residents to about 200 collection points, where each person will be allotted 25 litres of tap water per day. That’s just 10 litres more than the minimum amount the World Health Organization says people need to survive in an emergency.

The city’s mayor Patricia de Lille has asked residents to conserve water in any way they can—while imposing strict rules on how, and what amount of, water can be used. The city is now at level six restrictions: No washing cars. No watering gardens or lawns. No topping up swimming pools.

Residents are allowed to use no more than 87 litres daily per person: that’s enough to wash the dishes, take a one four-minute shower and flush the toilet four times. Signs are plastered across town and education campaigns are running on water-saving methods. “It’s on the radio, it’s everywhere that we must use less water, so I think we’re all so used to it already,” says Lileen Boonzaaier, who owns a posh beauty salon in the city’s central business district. “It’s in our brains.”

Boonzaaier, like many others, is trying to find ways to reduce her usage. Many of her clients at Lila Vie Salon are now getting pampered without a splash of water. Dry pedicures, dry shampoo, leave-in conditioners, styling without a rinse are the orders of the day.

The crisis is affecting the entire Western Cape province. Bonzaaier’s parents live about four hours inland, where little rain has fallen and vegetation is drying up. At home in Cape Town, Boonzaaier and her family are taking quick showers, washing dishes less often, and repurposing wastewater.

The drought has been attributed to climate change, with low rains reducing the water in local reservoirs. By the end of 2017, just 153.5 mm of rain had fallen at Cape Town Airport, according to weather records—the lowest annual accumulation in at least the last 40 years. In the first week of January, the city’s dams were storing less than a third of the water they can hold—water that supplies not only Cape Town but neighbouring communities and swathes of agricultural land. By April, they could be down to 13.5 per cent capacity—the level the city has determined will be Day Zero.

City departments, law enforcement and disaster response teams have begun practising for that dire moment. The city is consulting with the South African Police Service and the National Defence Force to keep people calm.

Critics say authorities should have seen this coming. Past calls to the national government for funds to exploit more water sources, they say, were turned down or delayed. The municipal government, however, is taking steps to find other sources, bringing in some water from two other reservoirs. Work is also underway on seven projects that include desalination and recycling, while 12 more are in planning stages.

Still, all this won’t be enough to stave off Day Zero without immediate reductions in consumption, de Lille warns. And the harsh restrictions are already highlighting Cape Town’s deep-rooted economic and racial inequality. During apartheid, non-whites were pushed into the townships—designated areas on the fringes of the city. Those areas, as well as “informal settlements” in and around them, are now predominantly black, and poor—with many people lacking access to basic services.

Governments had promised to improve access to services like water in those areas. Yet only about five per cent of Cape Town’s municipal water is consumed in informal settlements, even though it’s estimated they contain more than 100,000 of the city’s households, or nearly one in seven families.

Many people living there don’t have access to running water in their homes so they rely on public taps, says Kenny Tokwe, a community development worker in Imizamo Yethu, an informal community in Hout Bay, on the opposite side of Table Mountain from Cape Town’s city centre. Tokwe says some people get up as early as 4 a.m. to line up at water points to collect water in containers to take home.

Even then, he says, many are not reducing their consumption, because they feel they can’t afford to. People who make a living washing cars, for instance, have a hard time finding alternatives in the current economic climate. The city has asked private residents to wash vehicles less often, use waterless products, and even write “I’m saving water” in the layer of dirt to show their efforts. But getting a carwash business to adhere to such restrictions is another order of challenge.

Andrew Saunders, who operates a guesthouse in Gugulethu township, says enforcement is spotty. “There’s no one that really checks on what people are doing,” he says. “It’s really for you to be responsible on how you use your water. You don’t have a timing device that could cut your water or anything like that.”

Instead, the city is relying on neighbours to call a hotline and alert them to violators. People are encouraged to take measures to avoid conflict: If they want to use recycled water for their garden or lawn, for example, they must print off a sign so their neighbours know they’re not wasters. If residents are caught breaking a rule, they can face spot fines up to 5,000 Rand (about $500). Repeat offenders could wind up in court.

But sometimes poverty contributes, notes Saunders. “In the townships and informal settlements you have taps that are leaking and they’re not getting fixed. That’s just a really unnecessary waste of water,” Saunders says.

RELATED: How climate change is costing you in the vegetable aisle

The city is promising to offer some help to poor households for free. It’s even added more repair teams. But many slow leaks are being pushed down the list to focus on fixing pipe bursts that waste more water.

What’s more, the municipal government has proposed a drought levy to recover some of the revenue it’s losing as people pay lower taxes because they are using less water. The levy would be determined by property value—and about 50,000 residents have already registered complaints.

And some are worried that the water woes will affect tourism, a key part of Cape Town’s economy—especially in the advent of Day Zero. Ighsaan Noosa, who runs an Airbnb adjacent to Table Mountain National Park, says most tourists are aware of the situation before they arrive and follow the water-saving measures. Still, he’s been trying to find ways to further reduce consumption—saving plastic water bottles to collect rainwater, reusing wastewater and looking into options like big storage tanks in case the worst happens.

As it is, the Day Zero initially expected in March has been bumped to April, while the city holds out hope it will never come. But even if Cape Town finds a way to fill up its reservoir, who gets the water, and how much, is bound to remain a source of deep division.