U.S. ratification has been stalled for months 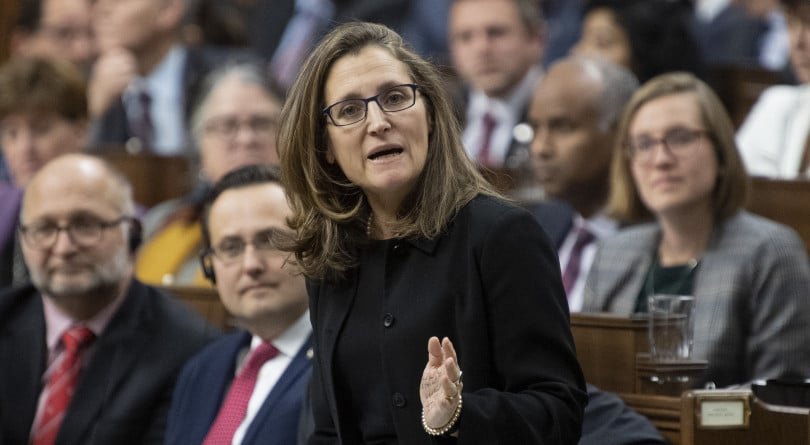 Deputy Prime Minister and Minister of Intergovernmental Affairs Chrystia Freeland responds to a question during Question Period in the House of Commons Monday December 9, 2019 in Ottawa. THE CANADIAN PRESS/Adrian Wyld

OTTAWA — Canada joined the United States and Mexico in heralding a new era of North American prosperity on Tuesday as they formally agreed to changes to the new continental free trade deal.

The amended deal comes after years of intense negotiations marked by bickering, threats and frustration.

“This has been a long, arduous and at times fraught negotiation,” said Deputy Prime Minister Chrystia Freeland, who was in Mexico City for the elaborate signing ceremony.

“All of us together have finally accomplished what we set out to do at the very outset: a win-win-win agreement which will provide stability for workers in all three of our countries for many years to come,” Freeland said.

The three countries originally signed a renegotiated North American free trade pact a year ago, but U.S. ratification stalled as Democrats in Congress and their organized labour allies bickered with Mexico over labour rights, as well as the deal’s treatment of steel and aluminum.

Democrats were upset with provisions around intellectual-property rules on pharmaceuticals and settling disputes, all of which led to fresh negotiations to amend the deal by tightening up some areas of the proposed agreement and loosening others.

The revised deal was immediately met with both applause and anger from various Canadian industry associations and others, with some blasting the new deal as harmful to Canada and others welcoming the changes and the agreement’s imminent ratification by all three countries.

Among those voicing tacit approval for the new deal were usual suspects like the Canadian Chamber of Commerce and the Business Council of Ottawa, but also Canada’s largest union, Unifor, and the Council of Canadians advocacy group, which has long criticized the previous NAFTA.

“The new (deal), while far from perfect, provides a road map to implement necessary changes in trade policy to benefit workers,” Unifor national president Jerry Dias said in a statement. “The improvements announced today are a helpful boost in achieving those objectives.”

While also describing the new agreement as flawed, Sujata Dey, trade campaigner for the Council of Canadians, said: “The changes to this deal show that while we are up against unprecedented corporate power, we are able to make a difference when we work together.”

However, the aluminum and brand-name pharmaceutical sectors were particularly upset with the revisions, which saw Mexico agree to a tighter definition on what constitutes North American steel but not aluminum and a loosening of intellectual-property rules on medication.

“Today’s announcement sends the wrong signal to the thousands of researchers and scientists across the country who have dedicated their lives to finding new cures and innovative treatments to help Canadians live longer, healthier lives.”

NDP trade critic Daniel Blaikie said his party was eager to see more details on the amendments before making any firm decisions on whether to support the deal, including the provisions on aluminum and intellectual-property rules for pharmaceuticals.

Bloc Quebecois Leader Yves-Francois Blanchet, however, warned that his party will not support the deal if Canada’s aluminum industry is not protected, describing the industry in French as “not only important in Quebec, it is emblematic of Quebec.”

Freeland, Lighthizer and Seade went out of their way to defend the deal in separate addresses prior to signing the agreement, with the Canadian deputy minister insisting the federal Liberal government “worked hard to defend the interests and values of Canadians.”

Seade made a particularly lengthy defence of the deal, which will see the U.S. monitor Mexican labour reforms that include increasing wages for the country’s automotive workers and more protections from violence.

U.S. House Speaker Nancy Pelosi said in Washington on Tuesday morning that congressional Democrats were supportive of the changes, which were also approved by their AFL-CIO trade federation allies, paving the way for implementing legislation to finally be tabled in Congress.

“This is a day we’ve all been working to and working for,” Pelosi said.

The Democrats announced support for the deal the same day they introduced articles of impeachment against U.S. President Donald Trump.

It wasn’t immediately clear when the deal will be tabled, though Pelosi did say Democrats were hoping to get moving before the end of the congressional session on Dec. 20.

Mexico ratified the original deal in June while the Canadian government said it was waiting to ratify the agreement at the same time as the U.S.

There had been concerns the agreement, which aims to update the NAFTA, would not be approved before Congress disperses until 2020 and its focus shifts to next fall’s presidential election.

U.S. President Donald Trump, labour unions and many Democratic lawmakers branded NAFTA 1.0 a job-killer for America because it encouraged factories to move south of the border, capitalize on low-wage Mexican workers and ship products back to the U.S. duty-free.