Did a Canadian company sell the wrong camouflage to Afghanistan?

The U.S. military spent millions on a proprietary pattern that seems conspicuously green for Afghanistan 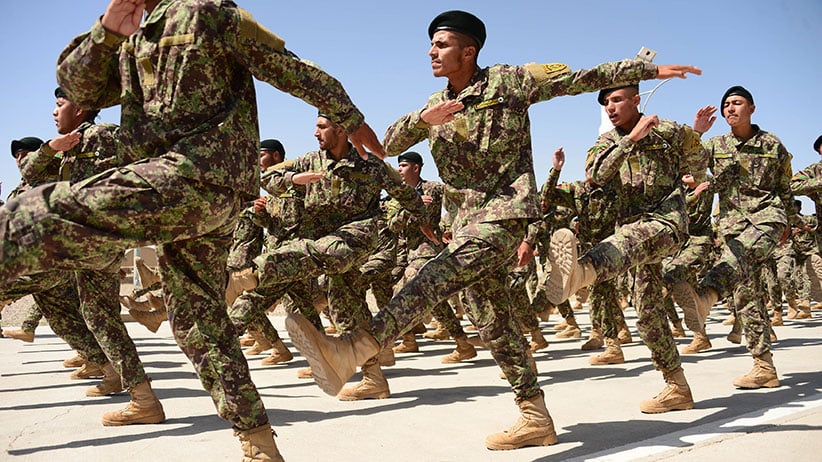 Too green? Afghan National Army soldiers during a ceremony for the completion of their training in Herat. (Hoshang Hashimi/AFP/Getty Images)

Camouflage is all about deception. The goal is to trick the eye into missing something that’s hiding in plain sight. So it’s not surprising that a Canadian maker of camouflage purports to see through a U.S. government watchdog report that criticizes one of its patterns, labelling it as “smoke and mirrors.”

Guy Cramer is the founder, CEO and sole employee of HyperStealth Biotechnology Corp. in Maple Ridge, B.C. Cramer had no professional experience in the world of camouflage before 2002. He’d been selling plumbing supplies when, dismayed by the cost of the new Canadian Forces uniform, he started tinkering with his own designs and posting them online. Cramer’s work caught the eye of officials in Jordan, and soon he was designing camouflage patterns for that country’s military. That led to contracts with a host of other countries, such as Britain and New Zealand. Cramer’s deal with the Afghan National Army, however, has put him on the defensive.

About a decade ago, the Afghan National Army (ANA) needed a uniform. Between 2002 and 2007, the country’s armed forces relied on an eclectic mix of fatigues donated from various countries. A standardized uniform, it was hoped, would help the disparate factions in the army forge a common identity and signal that Afghan soldiers were members of a unified sovereign nation. The U.S. Department of Defense, as part of American support for Afghanistan, ultimately footed the bill for the uniforms, and deferred to the Afghan Ministry of Defense when selecting a camouflage pattern. DOD officials presented a range of options to Abdul Rahim Wardak, the Afghan defence minister at the time, who chose one of Cramer’s designs. The DOD has since procured more than 1.3 million uniforms printed with the proprietary pattern called “Spec4ce Forest” for the ANA.

For HyperStealth, the deal resulted in a multi-million-dollar revenue stream and another international client to add to its roster. But the Office of the Special Inspector General for Afghanistan Reconstruction (SIGAR), created by Congress to oversee U.S.-backed projects in the country, says the DOD spent US$28 million more than necessary on the uniforms, which might not even be suitable for Afghanistan. A report released earlier this summer notes the ANA camouflage supplied by HyperStealth is a forest pattern, while only 2.1 per cent of Afghanistan is forested. No testing was done beforehand to determine how effective the pattern is. SIGAR concluded the only reason it was chosen was because the Afghan defence minister liked it—based purely on aesthetics. The report recommends the DOD conduct a cost-benefit analysis to see if a better alternative can be found.

READ MORE: The global horror that Obama left behind

John Sopko, the special inspector general, has been highly critical of the decision. “This is just simply stupid on its face,” he told reporters. “We wasted $28 million of taxpayers’ money in the name of fashion, because the defence minister thought that that pattern was pretty. So if he thought pink or chartreuse was it, would we have done that?” Last month, U.S. Secretary of Defence Jim Mattis sent a memo to Pentagon officials imploring them to “use this error as a catalyst to bring to light wasteful practices—and take aggressive steps to end waste.”

Cramer, commenting for the first time about the report, objects to many of the conclusions. First, the licensing fee paid to HyperStealth over the past 10 years amounts to roughly $3 million—not $28 million. “They lay the blame on the camouflage for the cost overruns when in fact the vast majority of the extra costs are due to the cut on the uniform,” Cramer wrote in an email.

The report concentrates heavily on HyperStealth’s pattern, as did the ensuing media coverage. SIGAR compared the ANA uniforms to those worn by the Afghan National Police, which does not use a proprietary pattern, and found the military uniforms to be up to 43 per cent more expensive. But the ANA uniforms are also an entirely different style, incorporating hook and loop fasteners, more pockets, and zippers instead of buttons. SIGAR acknowledges that these features raise the cost, but it does not break down how much of the final bill is due to HyperStealth’s licensing fee. The organization also contends that switching to a non-proprietary pattern and a simpler design could save U.S. taxpayers up to $71 million over the next decade. HyperStealth’s licensing fee is only a small component of that amount, Cramer contends, accounting for $5 million at most (a SIGAR spokesperson said Sopko was travelling and unavailable for comment).

RELATED: Trump vows victory in Afghanistan, but plan is murky

The cost is only one aspect of the problem, according to SIGAR. A forest pattern would seem like an unnatural fit for a country with an abundance of barren desert. The Canadian Armed Forces, for example, came under criticism for wearing dark-green fatigues in 2002 when deployed to Afghanistan. A sand pattern was introduced the following year. Nevertheless, former Maj.-Gen. Andrew Leslie wanted troops to wear the green pattern initially. The goal was to be seen by local residents and distinguish the Canadians from other forces wearing tan fatigues. “When you’re up in the mountains and you’re operating in a lights-out environment, the greens themselves offer better camouflage and concealment,” he said in 2003.

Cramer contends the ANA operates in a variety of regions aside from barren desert—forests, woodland and agricultural areas—suggesting the choice of HyperStealth’s pattern was not so irrational. Eric Tremblay, a retired major-general with the Canadian Armed Forces who worked with the ANA, says Cramer has a point. “Intuitively the percentage of operations in barren areas was most probably low,” he says. “Operations were mostly in rangeland, urban areas and, from time to time, in barren and mountainous areas.” While not making a judgement on HyperStealth’s specific pattern, Tremblay says green camouflage would provide more of a tactical advantage in rangeland areas.

The need to solidify the ANA as a fighting force may have led to a quick decision, Tremblay adds. Leaving the final call to the Afghans could also have been a way to help establish good relations. “Building indigenous capabilities is filled with sensitivities if you want to develop mutual respect,” he says.

The Afghan MOD did not reply to requests for comment. Cramer says he’s heard nothing—positive or negative—from the Afghans over the years. SIGAR did not indicate in its report whether the ANA or the Afghan government has complained or voiced concerns that the camouflage pattern is inappropriate.

If so, it wouldn’t be the first camouflage-related blunder. The U.S. Army adopted a new pixelated camouflage uniform in 2004 designed to work in all terrains. But studies before and after it was introduced revealed the pattern performed poorly compared to other designs. Soldiers started complaining too, and the military implemented a temporary solution for troops in Afghanistan and licensed a proprietary pattern from a U.S. company. The Army launched a multi-year study to replace the pattern, while politicians began decrying a boondoggle. Four finalists (one of which was a Cramer design) were selected in 2012. Two years later, the Army quietly announced that none of those patterns would be adopted. Instead, it chose one that had been developed internally.

Cramer isn’t optimistic that the ANA will continue using his pattern, especially since the SIGAR report and the DOD have expressed a preference for non-proprietary designs. Still, the process and politics of selecting camouflage, as Cramer knows well, is anything but clear.