Cherry singled out new immigrants in Toronto and Mississauga, Ont., where he lives, for not honouring Canada's veterans and dead soldiers 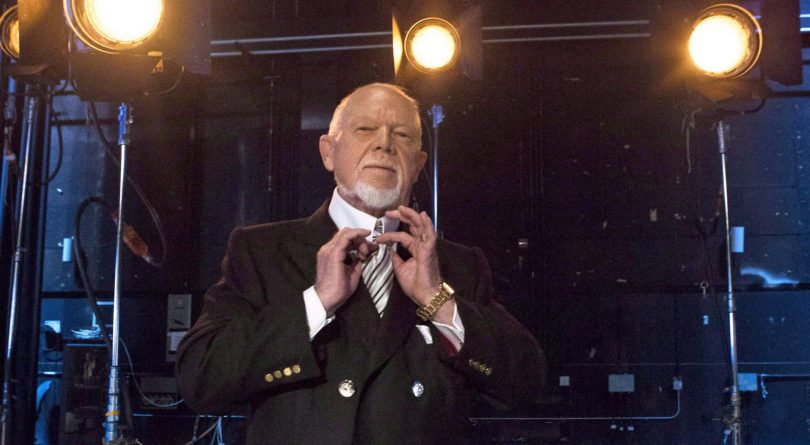 Don Cherry poses for a photo in Toronto on March 10, 2014 (THE CANADIAN PRESS/Chris Young)

His latest outburst cost him his job.

In a two-paragraph statement Monday afternoon, Sportsnet confirmed that it was cutting ties with Cherry.

“Sports brings people together — it unites us, not divides us. Following further discussions with Don Cherry after Saturday night’s broadcast, it has been decided it is the right time for him to immediately step down,” said Sportsnet president Bart Yabsley. “During the broadcast, he made divisive remarks that do not represent our values or what we stand for.

“Don is synonymous with hockey and has played an integral role in growing the game over the past 40 years. We would like to thank Don for his contributions to hockey and sports broadcasting in Canada.”

Cherry’s ouster came after a segment that sparked a swift backlash from inside and outside the hockey world. The network apologized Sunday for Cherry’s comments about his belief that new immigrants don’t wear poppies, and in turn, don’t support veterans.

On Monday — Remembrance Day — the network took it one step further.

Cherry, 85, had singled out new immigrants in Toronto and Mississauga, Ont., where he lives, for not honouring Canada’s veterans and dead soldiers.

“Coach’s Corner” and HNIC are broadcast on CBC in a sub-licensing deal with Rogers Media, which owns Sportsnet.

Cherry did not respond to multiple phone calls seeking comment. He has yet to publicly apologize.

The Canadian Broadcasting Standards Council said it was so overloaded with complaints about the segment that it exceeded the organization’s technical processing capacity. The CBSC said it was dealing with the broadcast under its normal process, but was not able to accept any further complaints.

“Don Cherry made remarks which were hurtful, discriminatory, which were flat out wrong … I owe you an apology, too. I sat there, did not catch it, did not respond,” MacLean said. “Last night was a really great lesson to Don and me. We were wrong, and I sincerely apologize. I wanted to thank you for calling me and Don on that last night.”

Criticism of Cherry’s comments poured in quickly as video clips of the segment circulated online. A consistently polarizing figure throughout his long broadcasting career, Cherry also had his share of supporters weigh in on social media over the last couple days.

A hard-nosed career minor-leaguer who won coach of the year honours with the NHL’s Boston Bruins in 1976, Cherry moved in front of the camera in 1980.

Known for his outlandish suits and thumbs-up gesture, Cherry was liable to say anything during the popular first-intermission segment on Saturday nights. Over the years, he occasionally weighed in with thoughts on European players, francophones, and politics— to name only a few subjects— which often landed him in hot water.

“Hockey Night in Canada” was a longtime CBC Saturday night staple, but the show and its games moved to Sportsnet when Rogers landed a $5.2-billion, 12-year national broadcast rights deal with the NHL that began in 2014.

There was no immediate word on who might replace Cherry on “Coach’s Corner” or if the segment would continue in its current form.