Tabatha Southey: While claiming to represent the 'everyman,' Ford offers tax breaks that will benefit the 'other man' 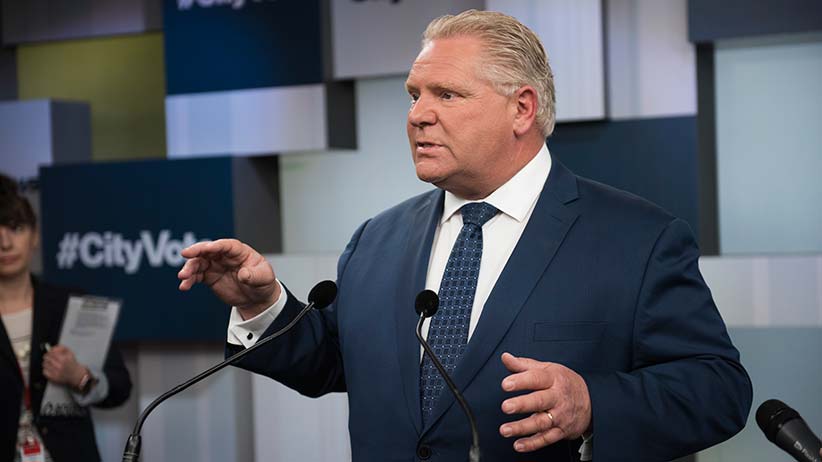 Doug Ford, leader of the Progressive Conservative Party of Ontario during a scrum after the CityNews first televised debate ahead of this year’s Ontario provincial election held at City studios on May 7, 2018 in Toronto. (Marta Iwanek for Maclean’s)

As with the election of Donald Trump, the whole point seems to be that we hit the social reset button and put an apparently affluent, straight, white man with all kinds of connections in charge again. What better way to underscore this point than by passing over the many competent, affluent, straight, white men out there in favour of a man who entirely lacks the experience and temperament for the task at hand? Why be subtle? This is politics as directed by Darren Aronofsky.

Sign up today for the Maclean’s Politics Insider newsletter >>

Our leading men in this mess, Ford and Trump, are both loud guys with blond hair who speak in catch phrases and promise to run government like a business. What goes unsaid is that the first step you’d take, if you truly meant to govern like a business, would be to write off the old people as a loss, then you’d cancel any babies on order and import your new people fully grown. To be fair, Doug Ford pretty much only speaks in catch phrases, then they pack him away back in the bus, while Donald Trump has proven himself to be far less controllable.

Both men inherited wealth, wealth they advertise as success. This wealth is sometimes brought up in a way that suggests that electing them would effectively be electing their affluence, which would no doubt spread. That’s part of why having no clear plan or platform didn’t hurt Trump, and it isn’t proving much of an obstacle for Ford, either. Who needs careful budgeting when you can just vote for winning?

At its most venal the insinuation becomes “This election, vote for A Rich Old Uncle Who Will Just Take Care of Things.” Ford reportedly said he’d buy a home to kick out the autistic children living there, and told the facility’s staff the home had “ruined the community.” Trump boasts of his own wealth as if it signifies that he has some sort of almost supernatural control over the economy. He promised he would bring back coal jobs like a contemporary King Cnut, he who famously turned back the tide but was then the victim of the very unfair Fake News Media.

Both Trump and Ford like to float the notion that, given the opportunity, they will fire people that they have no authority or reason to fire and that by rights their political opponents belong in jail. Both men express boundless confidence in their ability to deliver on dubious promises and both seem to have a complete disinterest in the kind of policy details necessary to fulfill any promises at all.

Both men claim to represent the everyman while offering tax and other breaks that will largely benefit the other man.

Doug Ford has promised to cut hydro rates by an additional 12% on top of the Liberal’s 25%, a cut he has criticized as irresponsible that clearly benefits those who spend more on hydro. To be fair, no one in any party is willing to suggest that hydro is just going to cost more from now on because that’s what hydro actually costs. Instead we’re told fairy tale after fairy tale in the form of hydro rate break after hydro rate break and all we have to do is believe. It’s all very “Clap your hands for Tinkerbell, Ontario, and the lights will go on” these days.

At this point, looking at a province so intent on being babied, I just want my dad’s voice broadcast from a loudspeaker on every corner counseling us all to “Put a sweater on if you’re cold, I’m not made of money!” and “Turn the bloody lights out, the place is lit up like the Crystal Palace!”

As it is, we are looking at deferring the real cost of our hydro, in the billions, to future generations and unlike daycare and post-secondary education costs these are not in fact sound investments (that give people who need it a break now) which can be sensibly amortized against future earnings.

When the lights go out, when the heat leaks out a window, it’s just gone and it doesn’t come back as a doctor.

This week Doug Ford piled on a promise to lower gas prices. An editorial in the Toronto Star added up the cost of his promises which, if implemented, the newspaper says would amount to over $14 billion in lost revenue and increased government spending. These commitments include an income tax cut that would, three years into a still mercifully hypothetical Conservative win, cost the province $2.3 billion in lost revenue. It has been estimated that this break would benefit Ontarians with an income below $49,000 to the tune of $7.

How will the loss of revenue not be felt in hospitals, schools, highways, buses or, God forbid, in water quality? Doug Ford promises to use his astounding financial powers to find billions of “efficiencies” in the province, without cutting any jobs.

Apparently those would be the same powers he demonstrated in his one term as a city councilor during which he was found to have used his influence less to show up and vote and more to assist his family’s business clients in their dealings with the city. He never did find those efficiencies he loves to talk about.

Ontario is all but poised to elect Doug ‘specifics-are-for-elites’ Ford, a man who considers ‘How does a bill become law?’ a terribly unfair “gotcha” question. At best the argument is that the Liberals have been in power a long time and have had their share of screw-ups and scandals so maybe it’s just time for a change, followed by “Wait no! Don’t vote NDP, that would be too much change!”

At worst the argument becomes vote for this guy, if he’s racist he’s not Trump-level racist. It could be worse, and his, to use Jen Gerson’s words, “truly idiotic idea” to force young women and girls seeking abortions to get their parents’ permission probably won’t survive a charter challenge.

“Vote for this guy, his worst ideas are so terrible the courts will save us from them and she’s just the worst” isn’t as novel a platform as it used to be and we’re already seeing how it plays out down south, but let’s give it another go up here. What could possibly go wrong?