O! how this spring of love resembleth/The uncertain glory of an April day! 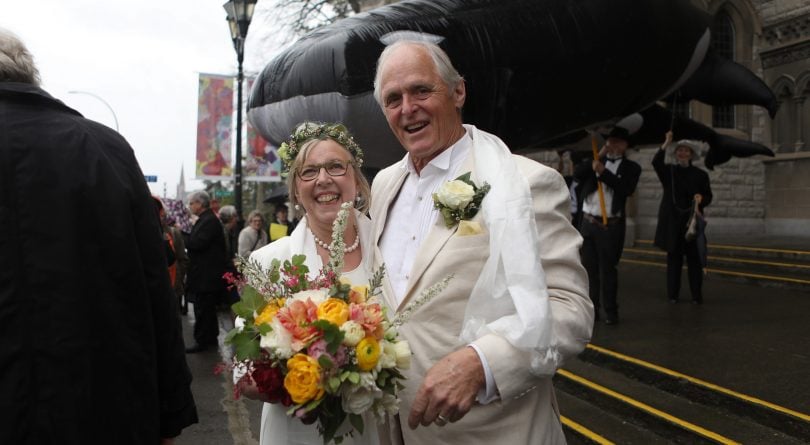 Federal Green Party leader Elizabeth May and her husband John Kidder greet the public following their marriage during Earth Day at the Christ Church Cathedral in Victoria, B.C., on Monday, April 22, 2019. (Chad Hipolito/CP)

Only someone with a coal heart could look at Elizabeth May and John Kidder on their Earth Day wedding day and think anything but “O! how this spring of love resembleth/The uncertain glory of an April day!” The couple’s radiant joy was the stuff of poetry as they exited Christ Church Cathedral in Victoria, B.C., before sharing an enthusiastic kiss in the rain in front of a cheering crowd. May, a first-time bride at age 64, wore flowers in her hair and a cream-coloured dress matched to her groom’s suit. The federal Green Party leader had sketched her dress’s design herself. She wanted to celebrate spring, dressmaker Sue Earle of Salt Spring Island told media; the tulips, peonies and ferns embellishing the dress were meant to suggest having just walked through a garden.

Choosing Earth Day to plight their troth was poetically political. May, a high-profile environmental activist before entering politics, had organized for Earth Day since its inception in 1970 when she was in grade 10. Kidder, a 71-year-old B.C.-based technology entrepreneur who runs his family’s hops farm, helped found the Green Party of B.C. in 1983; it was the first Green party in North America. The two met in 2013 when May, MP for Saanich-Gulf Islands, supported Kidder’s ultimately unsuccessful run as a provincial Green candidate. Love bloomed when they crossed paths last September at a Green Party policy convention. Kidder popped the question within a month. “I had a crush on him, and he had a crush on me,” May gushed to media. He was equally smitten, finding her “charming in every way.”

READ MORE: Elizabeth May is getting married. Let the bluebirds sing!

The love-match offers a hopeful reminder that renewal is possible, even when least expected. “I’m in my 65th year; to find true love is a miracle,” May said of her engagement. What May called #mybigfatgreenwedding on Twitter would also prove a model for eco-conscious, low-carbon nuptials. Guests were encouraged to arrive by bicycle, bus, train or ferry, with emission-free shuttles provided; Easter Sunday flowers in the church were repurposed; the flowers for hair and centrepieces were culled from local gardens; the reception was potluck; instead of gifts, the couple asked that donations be made to selected charities. Far-flung friends and family were asked to stay put and not burn carbon. The newlyweds will honeymoon on VIA Rail, traveling from Vancouver to Ottawa.

Already the shared purpose of Canada’s newest political power couple is evident. The best wedding present she could ask for, May tweeted, would be a Green Party win in Prince Edward Island’s April 23 election, a race shaping up to deliver the Greens to provincial power for the first time in Canada. There’s talk Kidder will run federally for the Greens in B.C. But that’s the future. Better today, on Earth Day, to focus on the uncertain glory of an April day on which two people in the giddy spring of love were wed.

FILED UNDER: Editor's Picks Elizabeth May