Federal Budget 2019: National pharmacare, but not quite yet

Liberals fund a framework for the Canadian Drug Agency, setting the stage for coordination with the provinces. But there's no promise for when — or if — coverage will kick in 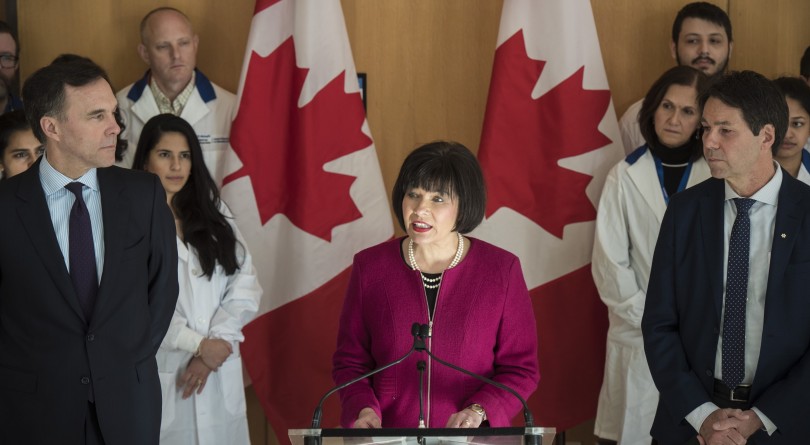 Bill Morneau, Minister of Finance, left to right, Ginette Petitpas Taylor, federal Minister of Health and Dr. Eric Hoskins, Chair of the Advisory Council on the Implementation of National Pharmacare, during a press conference on the national pharmacare program at the Li Ka Shing Knowledge Institute in Toronto on Wednesday, March 6, 2019. THE CANADIAN PRESS/ Tijana Martin

In terms of a national pharmacare program—something that was widely predicted to be a component of the Liberal government’s last budget before a fall election—what the budget contains is less an event invitation than a save-the-date card on which the date to be saved is listed simply as “Soon?”

A headline on page 60 of the budget proudly trumpets “Introducing the Canadian Drug Agency,” and lays out what this new body will do: act as a central clearinghouse to assess the effectiveness of new drugs, negotiate drug prices on behalf of Canada’s drug plans and recommend the best “value-for-money” drugs to eventually create a national formulary, or a list of accepted drugs that would standardize things across the country. “The Agency would be able to provide impartial and independent advice,” the budget says. “For the first time in Canada, drug evaluation and price negotiation could be carried out by a single entity—resulting in lower drug prices for Canadians and their families.”

The government contends that stronger central negotiating power could reduce the cost of prescription drugs by $3 billion a year; a budget backgrounder from the Finance Department notes that prescription drug spending in Canada has ballooned from $2.6 billion in 1985 to $33.7 billion in 2018. The budget also notes that Canadians pay disproportionately high drug costs, with brand-name medications costing on average 20 per cent more than in other advanced economies, and that there is a “patchwork” of drug coverage in Canada, including 100 public plans and 100,000 private insurance plans.

The money devoted to that project is modest, at $35 million over four years, with just $5 million earmarked for the fiscal year 2019-20, and the funding commitment ends in 2022-23. That’s the same year that $500-million in annual funding kicks in to make high-cost drugs for rare diseases more accessible to patients, suggesting that is the timeline on which the government anticipates it will switch from “moving forward” on a national pharmacare plan to actually having one.

In a press conference with reporters during the lock-up before the budget was tabled, Finance Minister Bill Morneau defended his government’s open-ended timetable given the complexity of the file and the need to get it right. “There are going to be those on the left who say you can do this overnight. This is actually hard work,” he said, later adding, “We’re going to get at the challenge of having national pharmacare in this country, but we’re going to do it the right way. And we’re going to get more advice from our committee in the coming months, so Canadians should stay tuned.”

The committee to which Morneau referred is the Advisory Council on the Implementation of National Pharmacare, an entity created by last year’s budget and headed by Dr. Eric Hoskins. The council released a brief and general interim report earlier this month, laying out a handful of the key elements a national pharmacare program should address, and the final report is expected sometime between now and June.

The budget’s steps toward establishing a Canadian Drug Agency are intended to address the rising costs of prescription drugs and standardize which drugs are covered across Canada, the government says. But this preliminary stage is not about addressing—yet—universal coverage for those drugs, and the budget makes clear that any next steps are all pegged to a wait-and-see approach toward the final report of the Advisory Council.

Linda Silas, president of the Canadian Federation of Nurses Unions, points out that while the advisory committee did not use the term “universal” in its interim report, it did cite as one of its core principles that any national pharmacare plan should “Ensure that all Canadian residents have access to prescription drugs based on medical need, without financial or other barriers to access.” The meaning of that, to her, is obvious. “Well, in my definition, that’s the definition of universal,” she says.

The notion of a national pharmacare program in Canada has surfaced repeatedly in recent decades but never seems to come to fruition because someone has to bite the bullet on the initial costs, Silas says. “Any advocate for pharmacare knows that there will be start-up costs,” she says. “The long-term will be savings: savings in our hospital sector, savings in the price of drugs, savings in the administration fees. We know the long-term will be savings for everyone, but the initial cost is a big buy to establish a new program.”

In his prepared remarks to the House of Commons, Morneau was consistent with the odd theme of this budget, in which the items most enthusiastically displayed in the shop window were of the dime variety, while the big-spending luxury goods were only glancingly mentioned. But, curiously, Morneau’s speech contained a more straightforward nod to the actual commitments on pharmacare—and to the timeline at play—than anything in the budget itself or the background documents from Finance which enthusiastically pointed to national pharmacare as a fait accompli. “This would help individual Canadians—such as seniors—and their families afford the medicines they need,” Morneau said. “It would support the sustainability of the drug plans they rely on today, and pave the way for national pharmacare tomorrow.”