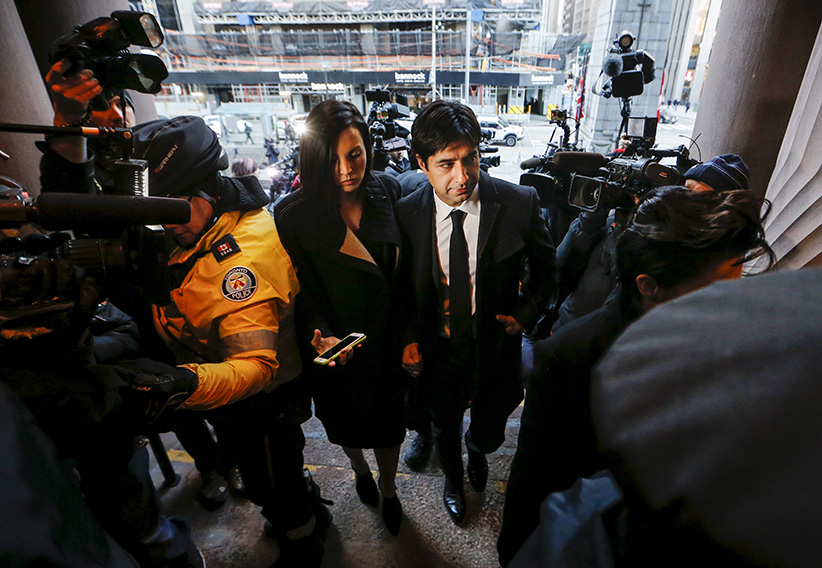 The damning emails were unveiled slowly on a big screen in court today, line by line, like a striptease in reverse. “Hello Play>Boy,” the first one unfurled, “Good to see you again! Your show is still great. When you take a break from ploughing snow naked take a look at [a link to a music video in which the witness performed]” It ended with a friendly entreaty to stay in touch via email or at a cell number provided. The missive, to Ghomeshi  dated Jan. 16, 2004 at 3:03 a.m., delivered a bombshell on day two of R. v. Ghomeshi, one inflicting a craterous hole in the credibility of the first witness.

Yesterday and today, the woman, whose identity is protected by a publication ban, testified after Jian Ghomeshi alleged sexually assaulted her twice in 2002 and 2003, she would turn the  TV or radio off if he was on. Ghomeshi  yanked her head back by her hair when they were kissing in his car, she testified; shortly after, at his house, he punched her head repeatedly with such force she fell to the floor. Asked yesterday by Crown prosecutor Michael Callaghan if she’d had any contact with Ghomeshi after the second incident, she said, “No,” adding that she’d written an “angry” email after hearing him on Q, the CBC radio show he hosted, but couldn’t remember sending it. She said couldn’t watch him on TV or listen to him on radio; it was “retraumatizing.”

Defence lawyer Marie Henein detonated that testimony today, setting the stage with a video clip from the witness’s report to police in 2014: “I’ve never listened to Q ever…even now with the new guy,” she said. She showed a photo of the witness from a taping of >play, the CBC Newsworld show Ghomeshi hosted taken the after the alleged assault in the car. The witness looks “happy,” Henein told the court, implying she was in no way traumatized. The lawyer noted that “six times, under oath,” the witness said she “had no further dealings” with Ghomeshi, pointing out that testimony she composed that “angry” email “during Q” indicated that she did in fact listen to the show. A transcript from an interview with CBC radio that did not mention kissing Ghomeshi contradicting courtroom testimony was cited by Henein as proof the witness’s ” truth keeps changing.”

Then, the final strafing. Henein walked the court through the email, line by line beginning with “Good to see you again!” “So you saw him again?” she asked the witness. “No,” the witness said, asking to explain. Henein expressed incredulity: You’re now inviting the man who traumatized you to get in touch with you?” she asked. “You haven’t let me explain,” the witness interjected. Henein continued  questioning: “Are you prepared to admit you lied under oath?” “No,” the witness said,  “I did not want to see him.” The flirtatious email was  “bait,” she said: “It was bait to call me so I could get an explanation as to why he would violently punch me in the head. I had no interest in him,”  she said: “I was in a committed relationship.”  Henein asked if Ghomeshi responded . “No,” the witness answered.

A second email sent six months later, dated June 22, 2004, at 1:46 a.m.  popped up on the screen. “I’ve been watching your show Screw the Vote [a 2004 TV documentary] and I thought I’d drop you a line to say hello. Hope all is well,” it said, before asking Ghomeshi to say hello to a mutual friend. The witness again defended her earlier testimony: “That doesn’t mean I was watching him,” she said. That email included an attachment:  a photo submitted as evidence but not shown to the court; Henein described it as the witness in a bikini, a “string bikini,” she specified. Metadata showed the image was Photoshopped hours earlier, she noted. “It’s implausible…a picture in a string bikini to the man who traumatized you,” she said, noting the emails were never disclosed to the police, the Crown, the judge. “Are you prepared to admit you lied under oath?” she asked the witness before saying she had no further questions. The Crown, blindsided by the turn of events, did not redirect testimony. The witness, holding her water bottle, left the courtroom, casting a look back at Ghomeshi as she walked through the door. His face betrayed no emotion.

Tuesday’s dramatic reveal electrified the courtroom and left questions in its wake. None of the proceedings actually refuted the witness’s allegations that sexual assault took place. Would the outcome have been different if the witness had her own Marie Henein in her corner to make sense of the messy, confusing and inconsistent realities of allegations sexual assault between acquaintances? Could a relentless advocate, educated in the effect of trauma on memory and behaviour, explain to the court how victims of sexual assault do not always cut ties nor change their opinion of the attacker; that it’s possible to be sexually violated then to try to reconcile events with a world-view in which the person who hurt them was a “perfect gentleman” and a “nice guy”?  Could such a person have directed the conversation to consent pertaining to the criminal charges, not relentless preoccupation with destroying the witness based on inconsistencies in retelling of events before or after?

We’ll never know. Less than an hour after her testimony ended, the witness released a statement read outside the courtroom by her lawyer, Jacob Jesin. In it, she said going to court and facing Ghomeshi had been “extraordinarily difficult” but worth it: “I want to encourage other victims of abuse to come forward, and not be afraid,” she said. “I feel like a weight has been lifted off my shoulders now that I have had a chance to tell my story openly.” Of all the alleged fabrications in this trial, this last line felt the most false.