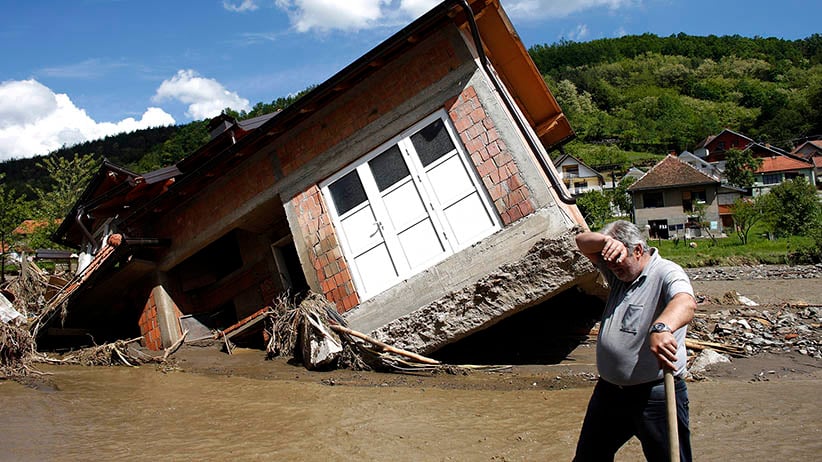 Justice on track
Three employees of the Montreal, Maine and Atlantic Railway, including engineer Thomas Harding, are due back in Quebec court in September to face charges in last year’s fiery derailment in Lac-Mégantic, which killed 47. While locals are relieved the case is progressing, the entire country is poised to benefit from the proceedings if it sheds light on how, exactly, the train, laden with crude oil, broke free and careened into the town below. Petroleum-rich Canada is grappling with an unprecedented boom in oil-by-rail shipments, and anything that can be done to make them safer is a top priority.

New World discoveries
Underwater explorers are providing fresh insights into North America’s history. A U.S. team has found a wreck off the coast of Haiti that they claim is the Santa Maria, Christopher Columbus’s flagship, which sank in 1492. And divers in Mexico have recovered a skeleton from a deep cave that has been dated back 12,500 years. DNA extracted from a molar established that the girl was an ancestor of today’s Native American, helping to confirm the theory that this hemisphere’s first settlers arrived on foot, via a Bering Strait land bridge, as long as 26,000 years ago.

India’s challenge
More that 563 million Indians went peacefully to the polls last week, handing Narendra Modi and his opposition BJP a landslide victory. Modi promises rapid economic growth and action on poverty. But many in India and elsewhere remain leery of the Hindu fundamentalism that has fuelled his rise. Sectarian strife is a constant danger in a country where the minority population of Muslims, Sikhs, Christians and Buddhists numbers in the hundreds of millions. The new PM vows to create a government that “lives for the people.” Let’s hope he means all of them.

Taking a stand
A Calgary eatery has touched off a furor with its discounts for “well-behaved kids.” But it’s hard to see why. In our view, other restaurateurs should follow suit and broaden the concept. Why not incentives for quiet talkers and discreet cellphone users, too? It could become another selling point for Canada’s hot culinary scene. In sharp contrast, gun-loving diners in Dallas descended on a Chipotle outlet, their assault weapons in tow. The chain has since issued a plea to customers to stop bringing their firearms to dinner. Mexican food is percussive enough.

Red serge, black mark
A secret study conducted by the Mounties has uncovered disturbing corruption inside Canada’s national police force: more than 320 incidents over an 11-year period, including a dozen cases linked to organized crime. The review, made public only after an Access to Information request, revealed unseemly behaviour ranging from improper disclosure of information and theft to interference with the judicial process. “The RCMP can and should be doing more in terms of a risk-reduction strategy,” the report concluded. “Left unaddressed, corruption can fester and affect the vast majority of honest employees.”

Surface anger
A massive fire ripped through a Turkish coal mine in the western town of Soma, killing 301 employees and sparking widespread anger in a country already notorious for its deplorable working conditions. Reports say coal had been smoldering for days leading up to the blaze, which triggered a roof collapse and released deadly toxic gases. Eight people, including the head of the firm that operated the mine, are being held on provisional charges of “causing multiple deaths by negligence.” More arrests are expected.

Flying the sickly skies
If checked luggage fees and disappearing legroom weren’t bad enough, air travellers now have another reason to dread setting foot on a commercial jet this summer: catching a nasty infection. Researchers at Alabama’s Auburn University found antibiotic-resistant bacteria, such as Staphylococcus aureus and strains of E.coli, living for up to a week on cabin surfaces, including armrests, tray tables, window shades, seat pockets and metal toilet buttons. Worse yet, the industry’s fixation on boosting efficiency means aircraft spend as little as 30 minutes on the ground between flights—barely enough time to clean up the newspapers, let alone everything else.

Please read this
Harry Potter’s spells aren’t so powerful after all. A new report from U.S.-based Common Sense Media says today’s kids are choosing to read far less than in decades past. In 1984, only eight per cent of 13-year-olds and nine per cent of 17-year-olds said they “never” or “hardly ever” read for pleasure; 30 years later, that figure has nearly tripled—to 22 per cent and 27 per cent, respectively. In fact, nearly half of all 17-year-olds—45 per cent—say they read, by choice, just once or twice a year. #werealldoomed.