Harambe is about everything and nothing. Just like the internet.

At an evening candlelight vigil for a deceased gorilla, Harambe, the lines between the sincere and the trivial become blurred beyond recognition 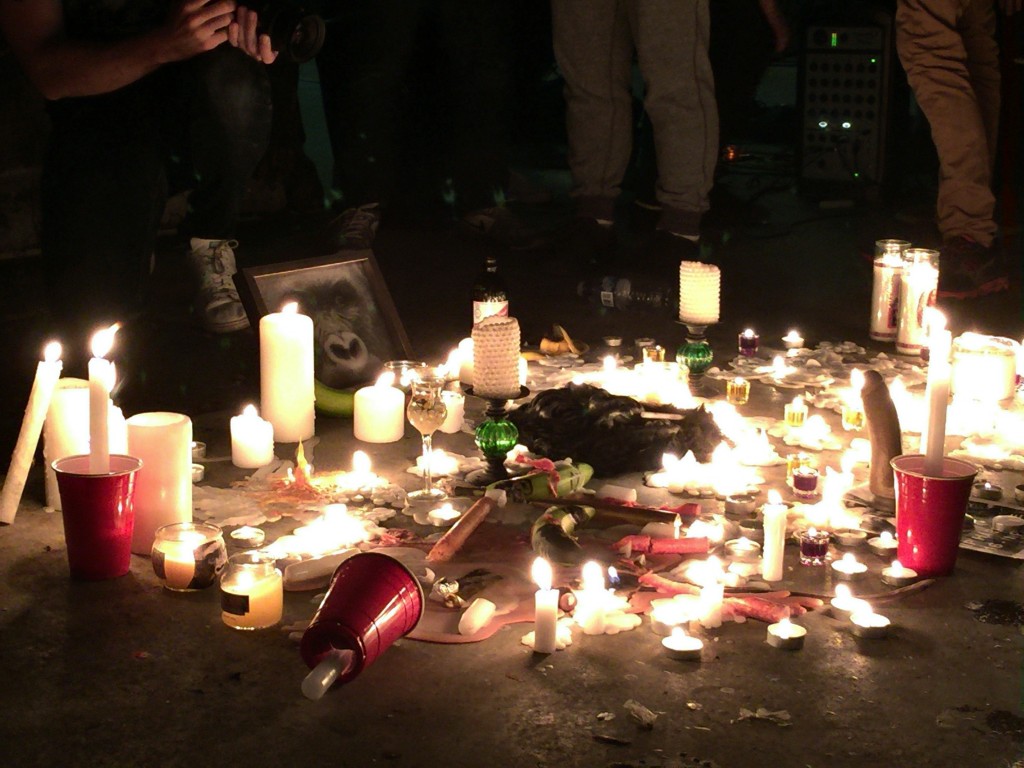 Candles sit on the ground at a vigil for Harambe the gorilla at Ryerson University, on September 22, 2016.

About 100 or so students gathered Thursday evening at Ryerson University’s Lake Devo. They were there, ostensibly, to honour Harambe, the Cincinnati zoo’s Western lowland gorilla that was killed in May after a three-year-old boy managed to climb into his enclosure. Video of the incident was uploaded to the Internet, whereupon it was cast into the harsh digital commons to be judged, and where its primary actors—the zoo and the boy’s parents—were steadfastly hailed as either villains or heroes.

Simultaneous to the outrage over the zoo’s handling of the situation, the Harambe meme appeared and, as New York magazine put it, anticipated that very outrage and sought to immediately undermine it. To put it simply, the Harambe meme started as the proliferation of images of the deceased gorilla presented in conjunction with tongue-in-cheek references to well-worn post-9/11 “never forget” sincerity, as a send-up of the insta-memorial tendency of the early millennium.

But unlike many other memes, Harambe’s has pushed beyond a reasonable expiry date for online fads, through the summer months of 2016, morphing along the way into its own miniature universe of images and sub-memes that are sometimes only tangentially related. And in some cases, like when it’s been incorporated into racist commentary, it’s very unpleasant. But little about the Harambe meme makes traditionally logical sense anymore. It has simply become a catch-all hashtag onto which anyone can graft any odd bit of cultural detritus—from 9/11 conspiracy theories, to bits of Harry Potter fandom, to Donald Trump’s recent birther falsehoods—that people will tell you is satire, but feels more like good old-fashioned nihilism. Harambe could be considered an avatar for the Internet itself.

Against a tall rock in the centre of the communal concrete space at the heart of the Ryerson campus Thursday night, someone had posted a large picture of Harambe. His name was spelled out on paper above him. At the base of the rock was a framed photograph of the gorilla, surrounded by candles: an arrangement mimicking those in the thousands of news clips and, more recently, Facebook photos or tweets presented to anyone who grew up in the 1990s and 2000s as the standard community response to anything from a missing child, to a mass school shooting, to global terrorism.

Sarah McLachlan’s “I Will Remember You” played loudly from some nearby speakers. When the song ended, a number of the guys in the crowd began chanting “dicks out for Harambe!”—the meme’s unofficial, absurdist tagline that has been labeled as sexist, but which originates from some kid saying it on Twitter for some reason. (Though, notably, there were far more men at Thursday’s vigil than women.) As two male students approached the crowd, one suggested to his friend that he climb the rock and “get your dick out,” to which another responded, “Helicopters for Harambe!” Soon after, someone did climb the rock. But he just flipped everyone the bird as the speakers blared the Black Eyed Peas’ “Where Is The Love?” Eventually, someone placed a dildo amongst the candles.

Taken as a whole, the vigil felt like some kind of postmodernist fever dream in which Harambe’s portrait was the only image left on Earth. And where it would therefore stand for all things and no things equally, forever and ever, as the real world and the Internet seamlessly melded together into an intensely concentrated hyperreality. At the very least, it all came off as just one gigantic cultural joke that’s gotten way out of hand. 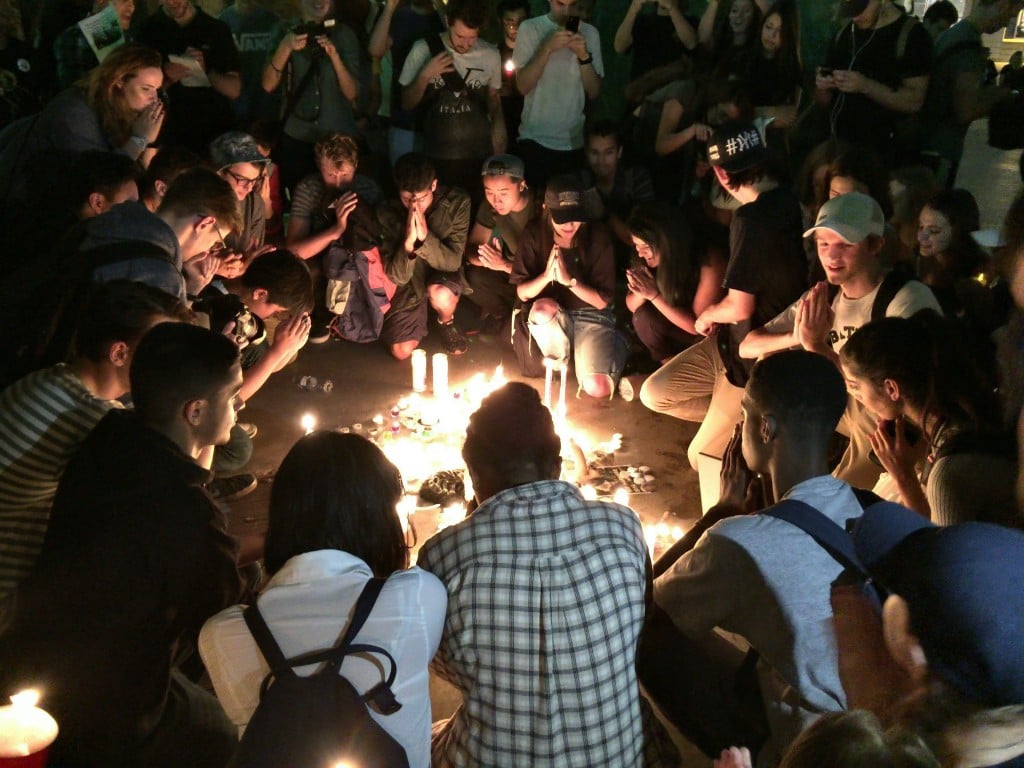 Students gather in a mock prayer to Harambe the gorilla at a candlelight vigil at Ryerson University in Toronto on September 22, 2016.

Presented with the theory that this was all just a big gag, vigil attendee Michelle Deberardinis said, “It is and it’s not. We loved Harambe, he was a great gorilla.” Asked when that love started, Deberardinis replied, “We all knew about him before. In our hearts, we knew who he was. He was just that kind of a gorilla.”

Miley Cyrus’s “The Climb” blared in the background.

Victoria Bozic, who was standing with Deberardinis, wanted to say something.

“I think the reason that people love Harambe is because of what happened to him when he died,” Bozic said. “And that, the circumstances were like, a little boy fell into his pen and he was punished for the boy breaking the zoo’s laws. So, people feel bad that Harambe lost his life for a little boy to survive.”

She was not alone on this. Time and again, those at the vigil Thursday who were asked to respond to the idea that the Harambe meme was, in reality, a hollow bit of epic trolling, rejected it.

“Although it is a joke, at the same time it is a serious issue, so I feel we can get students to come together and oppose animal cruelty as a whole,” Mustafa Malick, the event’s organizer, said Thursday afternoon over the phone.

As I was packing to leave the vigil, a student appeared at my side and simply asked: “Do you remember?” I asked whether he meant if I remembered the day Harambe was killed. He did.

“I saw that, and I was just like, how could they do that to an animal?” he said, referring to the video of Harambe being shot by the Cincinnati zoo employee. “Have you been to a zoo?” he asked me. “You look a gorilla in the eyes, and they’re just like us. It’s f–ked.”

I asked sardonically if he’d been waiting all summer for this evening. He said yes.

I didn’t catch his name. It was probably Harambe.