Psy and a Jay-Z's baby topped music charts, while a blogger and Kim Jong Un also earned the world's attention. 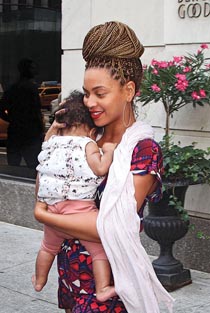 A career in the music Biz

What with the yachts, limos and baby bling, it’s been a sweet first year for Blue Ivy Carter—the most beautiful baby ever, according to her parents, hip hop royalty Beyoncé Knowles and Jay-Z. Within days of her birth, Jay-Z had mixed her cries and coos into Glory, a song he wrote celebrating her birth, making her the youngest artist to ever appear on the Billboard charts. All Dad wants for her, he says, is to “love herself . . . be respectful and be a moral person.”

Maybe it’s the baby face and his love of theme-park rides, but North Korean leader Kim Jong Un has yet to earn the level of fear enjoyed by his late dad, Kim Jong Il. He intends to change that by gaining control of the military. Some 14 senior officials have been purged this year and army vice-minister Kim Chol was allegedly blown to bits with a mortar round after Kim ordered his obliteration.

Tied up with a good book

Never at a loss for words

Can a socialist find success in an era of Euro-austerity? François Hollande, France’s first Socialist president since 1995, is trying to balance economic growth with Germany’s push for frugality. Hollande gave a 2½-hour speech at his first press conference. If only words were money.

He’s hot. He’s sexy. He’s Nate Silver, ace statistician. His FiveThirtyEight blog is a must-read for all political junkies, sabermetricians (baseball statisticians) and psephologists (election analysts). His algorithmic analysis called the results of the U.S. election in all 50 states, improving on the 49 of 50 states he called in 2008. Perhaps he stopped relying on partisan commentators who go on gut instinct and suspect polls, but don’t bet on it.

They called her, definitely

That Justin Bieber has an ear for talent. When he heard Carly Rae Jepsen sing Call Me Maybe, he helped tweet the Mission, B.C., singer’s catchy creation into a towering international hit, and invited her on tour. In November she won best song at the MTV Europe awards and best new artist at the American Music Awards. At the AMAs she returned the favour, introducing the Bieb as the “current generation’s biggest superstar.”

Some things defy explanation. Among those has to be Psy, a.k.a. Park Jae-sang, the sweet South Korean entertainer whose viral video for his song Gangnam Style has logged 775 million hits as of this writing. Psy, from Seoul’s affluent Gangnam district, was an established artist whose career was temporarily sidelined by military service. He emerged with his sense of fun and rhythm intact—assisted perhaps by all that close-order drill.