In Maine, a court battle over slimy fortunes

Rockweed might be a plant. Maybe it's a marine 'animal.' It's definitely contentious. 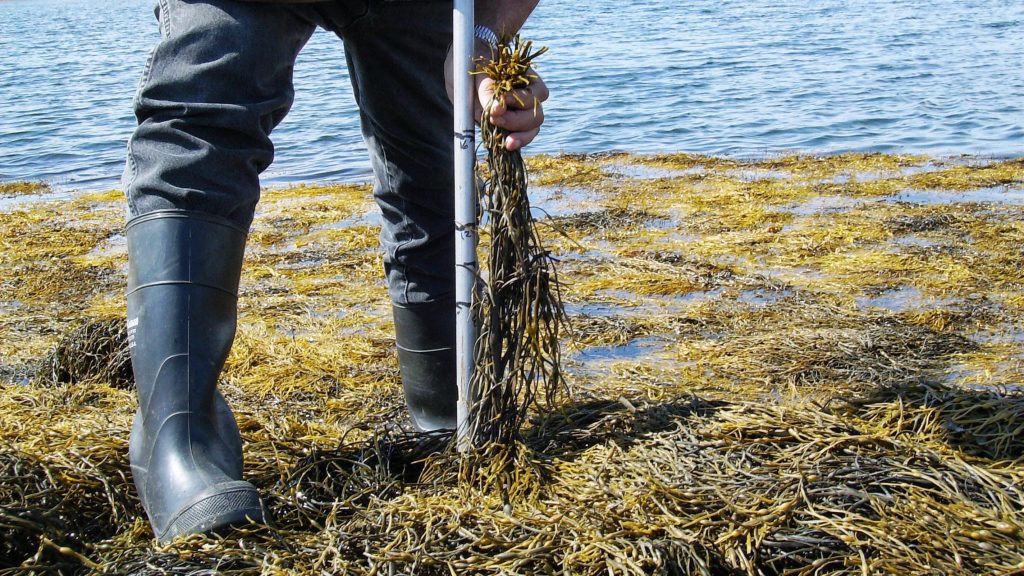 In this undated handout photo provided by Source, Inc., a Gavin Hood uses a “truth pipe” to measure plants to make sure workers are meeting cut height restrictions of rockweed harvested on the Maine coast. (AP Photo/Source Inc.)

Greg Lawson begins his days at four in the morning, anchoring his boat near the shoreline when the tide goes out and harvesting the exposed seaweed.

The 60-year-old father of five travels up and down the coast of Maine, clocking 12-hour days on the water. He uses a hydraulic cutter to harvest rockweed, a common seaweed variety that grows in the zone between high and low tide, and hauls it away to be processed into fertilizer, food additives and nutritional supplements.

Not long ago, no one paid much attention to the mounds of slimey brown seaweed along the coast of Maine unless they got stuck in it while they were swimming. Today, an entire industry has developed around it. And right now, the state’s top legal minds are deep in it.

His employer, Halifax-based Acadian Seaplants, argues rockweed is just like a scallop, lobster or codfish: in other words, a natural resource from the sea. In the state of Maine, the public has the right to harvest marine animals in the intertidal zone on private property—but it’s less clear who has the right to marine plants.

READ: The story of Acadian Seaplants in Nova Scotia

Homeowners who say they’re concerned about the environmental effects of the commercial rockweed harvest have taken Acadian Seaplants, the biggest operator in the state, all the way to Maine’s Supreme Court. The future of the economy and the marine ecosystem depend on how the judges see Lawson’s job: Does he have more in common with a fisherman, or a thief sneaking into someone’s garden, lopping off the hydrangeas and selling them at the local farmers market?

As far as Lawson’s concerned, he’s doing the same thing he’s been doing since he was old enough to stand up: Fishing. Well, actually—“It’s more like clamming than fishing,” Lawson said, referring to another activity that involves harvesting a natural resource from the muck in the intertidal zone. What it isn’t like, he reasons, is digging up someone’s landscaping.

Some of the people who own the property upland from where Lawson does his work see things differently. A lawsuit they’ve filed against Acadian Seaplants points out there’s an important difference between rockweed and clams, lobsters and codfish: It’s a plant, they argue. Technically, actually, to complicate things further, it’s an alga—but it’s definitely not an animal.

In November, Maine’s Supreme Court heard a lawyer for the property owners argue landowners have a well-established right to the plants that grow on their property. The homeowners contend the public’s right to fish, fowl and navigate in the intertidal zone doesn’t extend to cutting seaweed.

Gordon Smith, a Portland, Maine-based lawyer for the homeowners, acknowledged the absurdity of arguing over whether harvesting seaweed is more like fishing or landscaping before the state’s Supreme Court. However, he said he would feel a lot more absurd if he was making the argument for the other side.

The court’s decision, expected at any time, could have a major impact on a growing industry that’s providing much-needed employment in Maine’s poorest counties if the judges side with the property owners. “If it’s managed right, it’ll be a good thing for the State of Maine,” said Lawson.

But others say the marine life that depends on the seaweed will be at risk if the judges side with Acadian Seaplants.

“This is a habitat that needs to be protected for its ecological services, not cut down to be sold four cents a pound for fertilizer,” says Robin Hadlock Seeley, a scientist who has researched the effects of rockweed harvesting in Maine and supports measures to restrict it. “The highest value for the rockweed is in the water.”

READ: How to turn seaweed into fuel

Companies have been harvesting rockweed on a small scale in Maine for decades, but the arrival of Acadian Seaplants in 2000 turned the practice into a large commercial operation. Suddenly, homeowners’ peaceful oceanfront views were marred by foreign interlopers, with the Canadian company’s boats hacking away at the gunk on their rocks for hours or days at a time.

Acadian Seaplants president and CEO Jean-Paul Deveau could have stuck to the shores of Canada, where the law is clearly in his favour and where his industry faces little to no public opposition. But he said Maine was a natural choice for expansion because its coast has the exact same rockweed species as Nova Scotia and New Brunswick, where the company was already operating.

Deveau said he believes the Maine property owners suing his company don’t represent the views of the majority of people in the state, who welcome the much-needed jobs. Acadian Seaplants employs 32 harvesters and five other full-time employees in the state, in addition to the spinoff economic activity created by more than a million dollars of investments in operations, transportation and capital in Maine. Seaweed industry representatives have estimated the sector’s total value to the state at US$20 million, although supporters of the property owners’ lawsuit question that figure’s validity.

“I really struggle when a special interest group can go and make it very, very difficult for an industry to exist,” Deveau said. “Particularly when the industry is very, very well managed and everybody’s working together to ensure the sustainability of this resource into the future.”

Deveau said Acadian Seaplants follows the same strict sustainability procedures in both Maine and Canada. Harvesters must leave at least 16 inches of seaweed attached to the ocean floor and only take a maximum of 17 per cent of the total biomass.

“This seaweed will be here forever, the way we’re managing it,” Deveau said. “After 40 years of harvesting in Nova Scotia and New Brunswick, there is no issue.”

But the property owners suing Acadian Seaplants and the scientists who support them say the fact the rockweed grows back is not enough. Seeley, the Maine-based scientist, believes the rockweed harvest is harming more than 150 species of marine life that depend on the seaweed for food and habitat, in addition to animals farther up the food chain that feed on that marine life in turn.

Both sides of the debate admit there is no hard data to prove the effect, or lack thereof, of the rockweed harvest on other species. But Seeley argues it’s irresponsible to allow the commercial harvest to continue at its current pace without learning more about the impact on the rest of the ecosystem.

READ: From the archives, with Peter C. Newman. Milking uranium from seaweed

“Because it’s not just a corn plant, because it’s a habitat, the question is, how do you define sustainable harvesting?” she said. “When you think about what’s sustainable, how much biomass grows back every year is important, but that’s not enough, you need to know a lot more.”

Not all scientists agree, however. Louis Druehl, a professor emeritus at Simon Fraser University and an expert in seaweed biology, said regulators need to consider people’s livelihoods as well.

“There’s nothing wrong with doing the studies, but I don’t know if we want to deprive people of their livelihood because you think there might be something wrong,” Druehl said. “Particularly if you can’t name what that something might be.”

Seeley said the lawsuit filed by the oceanfront property owners against Acadian Seaplants was a last resort, after the state failed to regulate the seaweed harvest in a way they thought was strict enough to protect the intertidal ecosystem. The arguments that form the basis of the lawsuit have nothing to do with conservation, however.

Instead, the lawsuit is all about private property rights — where the rights of the oceanfront landowners end and the rights of the public begin. If the landowners win, Acadian Seaplants and other seaweed harvesting companies will have to receive permission from every single private property owner upland of the intertidal zone where they work. The property owners behind the lawsuit hope enough of them will say no to have a significant effect on the amount of rockweed cut along the coast each year.

READ: Learning from the sea

Ken Ross, a retired political scientists and a plaintiff in the lawsuit, said he would prefer not to be making the property rights argument in court. He’s aware of how it looks to many of his neighbours: A group of wealthy oceanfront homeowners banding together to stop an industry employing less-well-to-do residents from ruining the view.

“It might be better if it were publicly owned and responsibly managed. But the state was doing exactly the opposite,” Ross said. “It’s in collusion with the industry that is exploiting it and doing it without adequate scientific support.”

Ross said he believes restricting the rockweed harvest is actually in the best interest of people in Maine who make their living from the sea. “We think we’re doing more by protecting the habitat and protecting the protective rockweed than they are by cutting it down. We’re providing more longterm benefits to the local fisheries than they are,” he said.

Ross, who is 80, said he helped organize and fundraise for the lawsuit because he saw an opportunity to take action against the stark decline in biodiversity on the coast of Maine he’s been witnessing for the better part of a century. He described a childhood spent marvelling at the wildlife living near the family cottage he now owns — starfish, sand dollars, sea urchins, moon snails and ospreys. Today, he said it’s rare to see any such wildlife from the shore.

“It’s been a drastic decline in almost everything,” Ross said. “It had to be dealt with and it was something we could do something about.”

READ: Something fishy in B.C.

Lawson, the rockweed harvester for Acadian Seaplants, said he’s not so sure about that. He said the company is the most responsible one he’s ever worked for when it comes to sustainability, requiring him to keep careful logs of how much he cuts and reminding him not to go over his quota when he gets close.

“It is sustainable if you cut it halfway decently, if you don’t cut it right to the bone,” he said. “I think 95 per cent of the people opposed to seaweeding, I think they just don’t know.”

Meanwhile, the fate of Lawson’s job rests with the judges of Maine’s Supreme Court, who are carefully considering a more existential question: What is rockweed, anyway? To get the answer, they had a number of questions for both sides’ lawyers when they appeared in court in November.

Does rockweed take its nutrients from the ground, like a plant, or the sea, like a fish? Can cutting rockweed be compared to mowing the lawn? What about rockweed that’s floating, not attached to the ocean floor—who owns that?

None of these questions have anything to do with conservation, and arguably have little to do with private property rights. But to Lawson, it’s clear what rockweed is—it’s a living. And he’s hoping he’ll be able to continue making one.

MORE ABOUT FISHERIES AND OCEANS CANADA: