Inside the mission to unite a country after ISIS 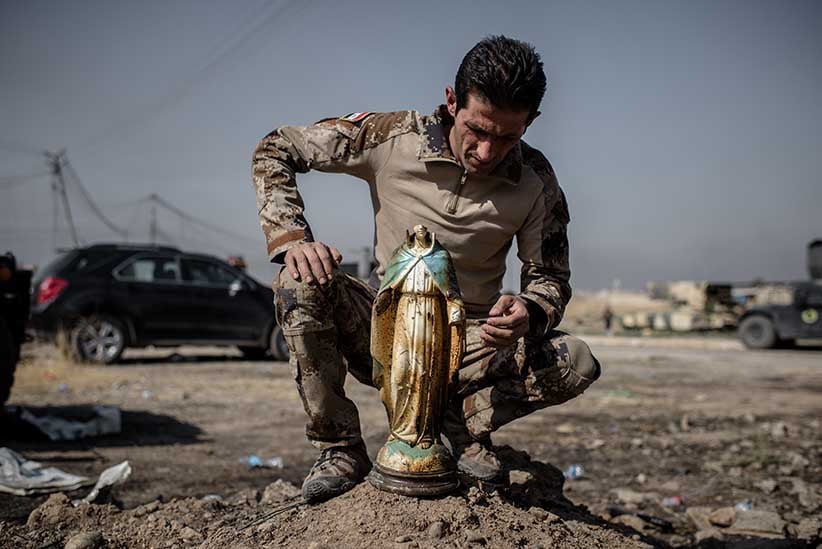 An Iraqi soldier pieces togeather a destroyed figurine of the Christian Virgin Mary in the town of Bartella, Iraq on October 23, 2016. (Photograph by Cengiz Yar)

A group of Iraq’s Golden Division special forces soldiers relaxed next to their black-painted Humvees in a war-scarred town on the Nineveh Plains on Sunday, awaiting their next battle on the road to Mosul. The historic Christian village of Bartella bore all the signs of 2½ years of occupation by the Islamic extremists—and of the fight to expel them—while the Islamic State’s capital in Iraq lay just over 10 km further down the highway.

Spent cartridge casings and empty grenade canisters lay in piles around the Golden Division fighters, the surrounding buildings pockmarked by bullet holes and blown-out windows, power poles snapped in half by the force of coalition airstrikes. In the ruins, one soldier found a shattered statue of the Virgin Mary, and stood the broken torso on a pile of rubble.

Then 1st Sgt. Rafat Al Dalemo found the head in the dust and gently replaced it atop the charred figurine. “It’s hard for us to see such things,” he said, as a machine gun fired somewhere in the distance. “It’s our heritage here, these are our symbols and legacy also.” 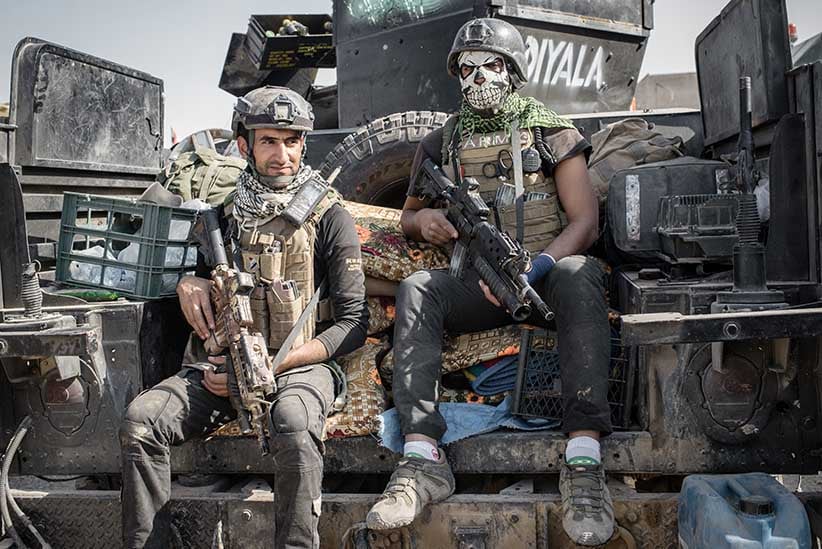 Iraqi government forces ride on a Humvee through the streets of Bartella, Iraq on October 23, 2016. (Photograph by Cengiz Yar)

Dressed in black tracksuit pants, a Monster energy drink T-shirt and flip-flops, the 31-year-old looked more like a stall-holder in the bazaar than one of Iraq’s elite fighters. But as he talked, he showed how even while on the warpath, the Golden Division is on a charm offensive to convince Iraqis of the possibility of a non-sectarian future. “I’m from the south, a Shia, but I came to Bartella to fight for Christians, for all Iraqis,” he said.

Related: ISIS will soon be driven out of Iraq. What comes next?

The operation to drive Islamic State from Iraq is gathering momentum, with Iraqi Security Forces and Kurdish peshmerga collaborating for the first time to drive the extremists toward a final showdown in Mosul. As it penetrates into Iraq’s Christian heartland, the Golden Division is uncovering the full extent of the Islamic State’s Sunni Arab sectarianism. But for now at least, the sunset over Islamic State’s caliphate in Iraq is casting a rosy (but perhaps fleeting) glow over relations between various Iraqi factions.

Iraq’s northern Nineveh province was once its most diverse. The Nineveh Plains, with traditionally cosmopolitan Mosul at its centre, were long home to much of Iraq’s ancient Christian community, its Yazidi religious minority, as well as Sunnis, Shia, Kurds, Shabaks, Turks and other ethnic and religious groups. When the Sunni extremists of the Islamic State seized much of the province in summer 2014, most minorities fled. Perhaps worst affected were the Yazidi, targeted in a systematic campaign of murder and enslavement that may amount to genocide. With Christians facing a scarcely more palatable choice to convert, flee or die (few trusted the offer of protection for paying jizya—a non-Muslim tax), more than 125,000 sought refuge in Iraq’s autonomous Kurdistan Region. Of those, perhaps 40 per cent have since left Iraq altogether, with many talking of a death knell for Christianity in Iraq. 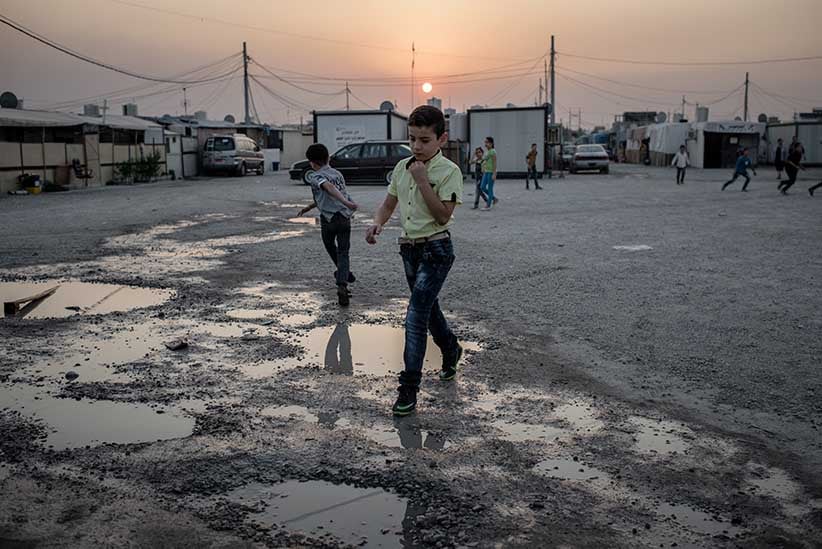 A child walks to church at a camp for displaced Christians in the Ankawa neighborhood of Erbil, Iraq on October 23, 2016. (Photograph by Cengiz Yar)

On Sunday, it was church bells ringing over Bartella, however, pulled by an enthusiastic Golden Division fighter, while his comrades recounted their battle to retake the town. 1st Sgt. Idris Khader downplayed the intensity of the dawn-to-dusk gunfight to retake the town last Thursday, and of the danger posed by the score of suicidal diehards who remained behind in the city to detonate themselves and their explosives-laden vehicles in the Golden Division’s path. “Daesh only leave their suicide fighters behind, the rest flee once they see our black Humvees,” he said with disgust, using the Arabic acronym for ISIS.

Related: The dangers in the fight for Mosul

Khader is 28 but his pinched cheeks, lined eyes and grey-flecked temples are testament to how 10 years in Iraq’s most elite fighting force will age a person. “Tikrit, Baiji, Fallujah, Ramadi, Hit”—he listed off the battles in which he has fought ISIS until he runs out of fingers on his hand.

The Golden Division has been at the forefront of every major victory against ISIS and now they’re expected to retake Mosul. They’re tough, tattooed fighters, who dress in skull-printed T-shirts and scorn most other Iraqi Security Forces and peshmerga units. They’re proud nationalists, an ethnically diverse fighting force that still believes in the Iraqi state. “I’m a Kurd but don’t say I’m from the city of Duhok,” Khader said. “Just say I am an Iraqi. Baghdad is mine, Basra is mine, Iraq is and will be one.” 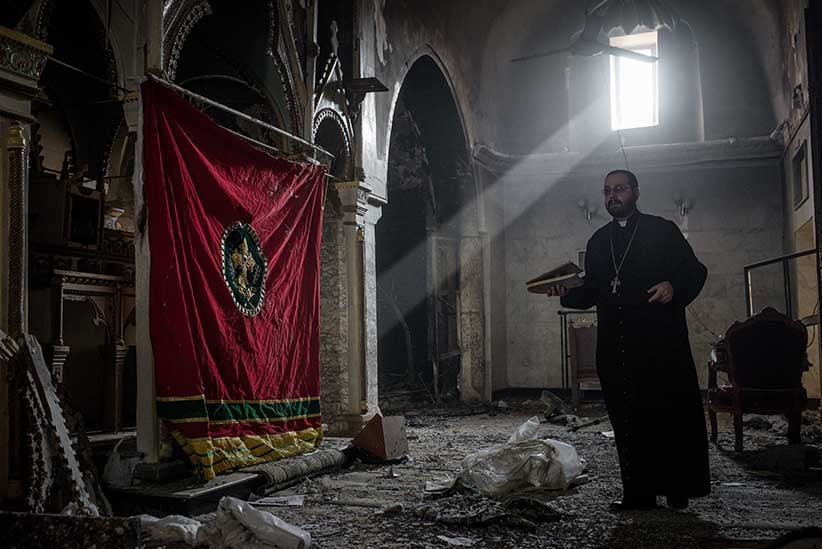 A Christian priest walks through debris in a partially destroyed church in Bartella, Iraq on October 23, 2016. (Photograph by Cengiz Yar)

Shortly afterwards, a church delegation arrived in Bartella accompanied by a heavy security detail. Bishop Dived Soleman Dusha and Father Jacob Saadi Shammas sat in an SUV as it drove through empty streets toward their church, anxious about what they might find. Aside from a few ISIS fighters, the town had remained empty since its inhabitants fled in August 2014. Many of the buildings were ransacked and apparently torched. In an untended garden, grapes rotted on the vine. In what had been the main shopping street, the flapping shutters of storefronts rattled as an ISIS improvised explosive device was detonated in a distant controlled explosion.

The convoy pulled in at the Orthodox Assyrian Church of Bartella. Father Saadi stepped over broken glass at the threshold, swinging a thurible of burning frankincense. He picked his way across a floor strewn with feathers and bird droppings, looked up at the sooty ceiling and a broken cross above the altar, and then stooped to pick up a broken wood carving. “The feeling I have is that of every wounded Iraqi who has been hurt by these criminals,” he said.

Throughout Bartella, Islamic State fighters had carried out a casual and at times gleeful desecration of the town’s religious buildings. Another nearby church appeared to have been deliberately demolished by the extremists, its cross torn down and religious murals defaced with spray paint. One church building had been used by ISIS fighters for training and recreation, a whiteboard still listing their daily routine—exercise in the mornings followed by sharia lessons, then training in hand-to-hand combat. Soccer goals had been installed inside the hall.

Outside the church cemetery had been used as a firing position, a misfired rocket on a homemade launcher still standing among opened and apparently desecrated tombs. “No god but Allah, it’s over for the cross” was sprayed in black on a wall.

“I’m very happy,” Bishop Soleman announced, surveying the damage. “Thank God, thank the Iraqi Army, the Golden Division and the peshmerga for giving us this gift,” he said, waving a soot-blackened hand about his parish.

As a member of Soleman’s party piled choir cassocks into a bag, the security detail hurried them back to their cars. “We’re afraid of snipers,” explained one of their escorts.

Waiting several kilometres back toward the Kurdish capital of Irbil on the Mosul highway, a small cluster of displaced Christians waited at a peshmerga position for news of the ongoing operations to free their villages. While Bartella had been freed, fighting was ongoing in nearby Hamdaniya— formerly Iraq’s largest Christian town. Even so, the mood here was unfailingly upbeat. “We came down here today just to see our land for the first time in 2½ years,” said Sami Nisan Yesi Thamas. A 54-year-old labourer from Hamdaniya, he has lived in a Christian neighbourhood of Irbil since the summer of 2014. “I’m psychologically relaxed now because I can smell the breeze from our home,” he said.

If there was anything positive to come from the last few years of exile, it was that Iraqis were now working together to fight ISIS, he said: “The peshmerga and the Iraqi Security Forces are united for the first time ever to liberate our city.”

As he squinted into the sun toward Hamdaniya, seven kilometres across scorched and smouldering fields, he placed his hand on the shoulder of his 12-year-old son, Rami. His green eyes teared up with emotion.

“I have faith that we will return,” he said. “God willing, we will go back to our homes, rebuild, and then never leave again. We will stay in Iraq.”