Israel is the world leader in vaccinations. What can Canada learn from them? 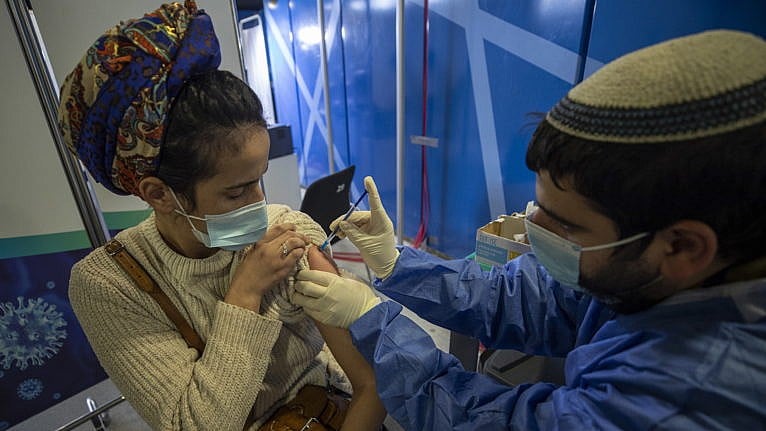 A woman is vaccinated against COVID-19 on Tuesday in the Medical Center in Jerusalem. Israel had by this point vaccinated over four and a-half million of its nine million citizens; three million had been given second doses. (Atef Safadi/EPA via CP)

As of Feb. 23, Israel had given at least one dose of COVID-19 vaccine to more than 70 per cent of its adult population. That unequalled pace means that Israel has become the real-world test case of the effect of vaccines on the pandemic. Already, the number of new cases, as well as hospitalizations and deaths, are dropping quickly among the vaccinated. As Canada ramps up its own vaccination program, Israel’s recent experience seems worth a close look.

What could the news from that country mean for our own vaccine future?

First, a few caveats: Israel is a much smaller country (around 10 million people). Israel also got a great many doses earlier than other countries, in part by paying about US$50 a dose, according to media reports. That’s about double what the European Union is paying, according to the Washington Post. (Canada hasn’t disclosed what it is paying.) It also got a lot more doses far faster than Canada on a per capita basis; it took just two weeks for Israel to vaccinate around 10 per cent of its population. Canada is expected to hit that mark at the end of March.

In addition, as part of its deal with Israel, Pfizer got access to extensive data on the country’s  vaccination program, according to Bloomberg News. That’s because it has a streamlined health-care system set up around just four community-based health plans, which use electronic records, as explained in this article about the vaccination rollout that was published last month in the Israel Journal of Health Policy Research.

The result has been a flood of early data from its health plans and research organizations as the country effectively turned itself into a study for how well the Pfizer vaccine performs. Though early results appear very promising, experts urge caution before delving too deep into the initial data. Much of it is still preliminary and needs further analysis.

“They did institute a good chunk of their program during a lockdown,” says Dr. Lisa Barrett, a member of the Canadian Centre for Vaccinology and an infectious diseases physician in Halifax. “So the plummeting rate of cases isn’t solely vaccine-related.” (Though cases are declining, Israel reported more than 4,100 cases on Feb. 24, well above Canada’s 2,900.)

Still, even with these necessary qualifications, there is no shortage of lessons to be drawn from Israel’s experience. Here are a few:

In Israel, the initial phase was designed to reduce severe illness and death so as to stop the health system from being overwhelmed. The critical group was identified early: “People aged 60 and over, nursing home residents, other people at high risk due to serious medical conditions, and front-line health care workers,” the IJHPR article explained.

“If you look at studies across multiple different comorbidities and risks, age sticks out as the big thumb in all of it,” says Dr. Zain Chagla, an infectious diseases physician at St. Joseph’s Healthcare in Hamilton, Ont. and an associate professor at McMaster University. “I think Israel can teach us that prioritizing age is profound. It is also the very easiest to validate [through proof of age].” Indeed, Israel considered raising the priority of those most responsible for transmission (ie., younger age groups, including essential workers) but decided to focus on those at greatest health risk, especially the elderly.

Everyone knew who was responsible for notifying and vaccinating each of those initial groups, including a “well-trained, salaried, cadre of community-based nurses who are directly employed by the health plans,” the IJHPR article explained.

Israel figured out how to repackage the Pfizer vaccine, which needs to be stored in ultra-cold freezers, into the equivalent of insulated pizza boxes for delivery to small clinics or more remote areas (with Pfizer’s approval). They also used every drop of vaccine, as Canada is now doing with low-dead volume syringes.

There will be growing pains

Some of the initial problems encountered in Israel will sound familiar to Canadians: difficulty scheduling appointments; not enough priority people showing up for appointments, meaning there was vaccine left over at the end of the day; lax enforcement at some sites of vaccination criteria, which effectively pushed priority people down the list in favour of others who should have waited; lower vaccination acceptance in marginalized communities.

Vaccinate as quickly as supplies allow

The unofficial theme of Israel’s plan is “organized chaos.”

The vaccination centres were set up for speed. Paperwork was minimal—“Their highly electronic way of working made things faster,” Barrett notes, “[while] we still deal with labels and paper”—and the process was streamlined with a schedule designed for flexibility. No doses were wasted, even if there was no one waiting from a priority group. At the end of one day, while Yaniv Erlich, CEO of a pharmaceutical firm in Israel, was visiting a vaccination site, he saw a nurse go outside, spot a pizza delivery guy and call out, “Pizza guy, wanna vaccine?”

Now, in an effort to immunize as many adults as possible, Israelis are being offered free drinks at bars if they agree to get vaccinated on the spot. They’ve also added a sense of celebration to the process, an approach they share with Britain, where those being vaccinated in the massive Salisbury Cathedral can request music from the organist that is timed to their appointments.

All those measures combined to allow them to “vaccinate people in a very mobile way,” explains Barrett, including those forays into bars and restaurants. “We worry a lot about privacy and consent, but many people can self-regulate and say, ‘I’m good’ ” if getting immunized in a public spot is what’s available. The result could be a “de-medicalized” approach to vaccinations. “This is part of life, not medicine,” Barrett explains.

The benefits of vaccinations begin with that initial, very vulnerable group

“The first thing from the Israel data is significant reduction in hospitalizations and deaths,” said Chagla. “That is probably the first indication that something good is coming from being vaccinated.”

Seniors aged 60 and older, who were in Israel’s initial vaccination phase that started in December, have seen a 77 per cent plunge in new cases since their cases peaked in early January during Israel’s third wave of the pandemic. When it comes to severe cases among seniors, the drop is 67 per cent, according to data from Eran Segal, a scientist at the Weizmann Institute.

In contrast, cases dropped only 52 per cent for adults aged 20 to 39, whose vaccination rates by that point were much lower. That’s a sharp contrast from what happened during the country’s previous wave, when cases increased and then fell at roughly the same rate for all age groups.

How does the Pfizer vaccine cope with the B.1.1.7 variant?

The dominant strain in Israel is the B.1.1.7 variant from Britain. A new study in the New England Journal of Medicine, examining data from Israel’s largest health organization, Clalit,  suggests that the Pfizer vaccine “effective against this variant.”

The improving COVID-19 data in Israel is “a good proof of principle” that the vaccines are going to work against B.1.1.7, says Chagla. For example, he notes, “there are more people in critical care in Israel who are under the age of 60 than over the age of 60,” which suggests that older Israelis—who are more likely to have been vaccinated—are fending off the mutated virus. That, he says, offers “a lot of hope for Canada” where B.1.1.7 will probably be the dominant strain in a month or two.

Does the Pfizer vaccine prevent the spread of infection to others?

While mRNA vaccines, such as the Pfizer and Moderna ones approved in Canada, are around 95 per cent protective against symptoms of COVID-19, scientists aren’t sure how well they do at preventing the spread of the virus to others.

What is occurring in Israel is “the first inkling, with rates going down, that yes, these vaccines work at a population level, not just at an individual risk level,” says Chagla. Indeed, early data released this week appears to confirm that the Pfizer vaccine does indeed a good job at preventing infections.