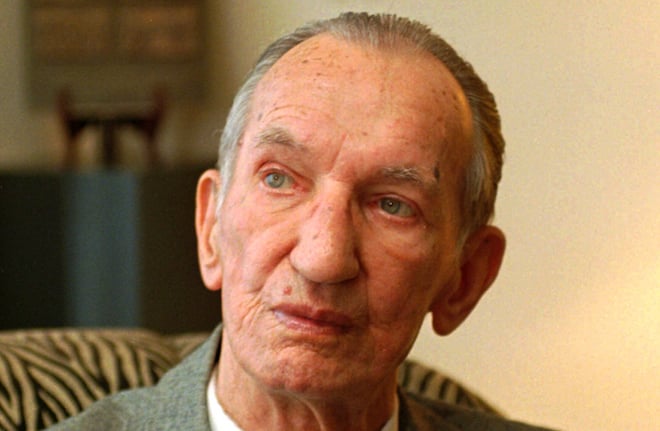 In 1942 Jan Karski, an officer and clandestine courier for the anti-Nazi Polish Underground State, was smuggled into the Warsaw Ghetto and the Izbica Lubelska transit camp to witness the unfolding extermination of European Jewry and report on what he saw to the rest of the world.

Jewish underground leaders in Poland organized both visits. Karski slipped into the Ghetto when Jews had already been interned there for years — and before its residents rose up in a heroic and doomed rebellion.

“To pass that wall was to enter into a new world utterly unlike anything that had ever been imagined,” Karski wrote later. “As we picked our way across the mud and rubble, the shadows of what had once been men or women flitted by us in pursuit of someone or something, their eyes blazing with some insane hunger or greed.”

Twice Karski entered the Warsaw Ghetto. He was then taken to the transit camp disguised as a Ukrainian guard, where he watched Jews stampeded into cattle cars with bullets shot into the surging crowds. Those wounded or too frail to move were murdered as they lay left behind in the dirt. The experience left Karski retching for two days.

Karski saw what he needed to. His subsequent journey took him across occupied Europe, to Britain, and then America. He reported everything he knew — to Poland’s government in exile, British Foreign Secretary Anthony Eden, and American President Franklin D. Roosevelt. But Allied leaders didn’t adjust their war strategy because of what he told them. Germany’s mass murder of Jews continued until the end of the war. Karski blamed himself.

“Inside he was full of pain that he didn’t succeed in helping the Jewish people. That was his main regret,” says Kaja Mirecka-Ploss, Karski’s close friend and housemate during the final years before his death in 2000.

“He was very much taken in by Roosevelt, that this man, the leader of the greatest nation in the world, had time enough to see him. He spoke always beautifully about Roosevelt, but he said, ‘When I left, I knew I hadn’t accomplished anything.’ He left with a heavy heart.”

Mirecka-Ploss, 89, was in Ottawa last week for the opening of an exhibition on Karski at the Canadian War Museum. The exhibit, created in cooperation with the Polish embassy, is a modest one. It contains no original artifacts, only panel boards. But it tells an important story. At the end of the month, it will travel elsewhere in Canada.

Mirecka-Ploss, who was born in Poland and suffered horribly during the war before immigrating to America, wanted to be at the opening. “Maybe because of my grandmother,” she says. Her grandmother converted to Catholicism to marry a Christian but died at Auschwitz anyway after her village neighbours revealed she had been born a Jew.

“And because he was my dearest friend,” she says of Karski. “We were not lovers. We were like an old married couple. We cared for each other.”

Also at the exhibition’s opening was Pinchas Gutter, who lived in the Warsaw Ghetto for almost its entire existence as a boy and young teenager. He remembers German soldiers, their girlfriends beside them, driving through the Ghetto and casually shooting Jews “just like you shoot at animals.”

“But there was a lot more to it,” he says in an interview. “There was an enormous amount of resistance and heroism.”

They were discovered. Gutter says German soldiers threatened to pump gas into the bunker’s airshaft if they didn’t come to the surface. “I felt so proud that these—I called them in Hebrew, these angels of death, because they were dressed like paratroopers with their helmets and their machineguns—and they were shouting, ‘Don’t shoot! Don’t shoot! Hands up!’ They were afraid of us.”

The family was sent to the Majdanek concentration camp. Gutter’s parents and twin sister died in its gas chambers. The last thing Gutter remembers is his sister’s long blonde braid as she ran to their mother and hugged her. He can no longer recall her face.

For years after the war Gutter didn’t discuss it. Once, sitting on the beach facing the water, his five-year-old daughter asked him about her grandmother, Gutter’s mother. He began to describe her and then started to talk about the Warsaw Ghetto. He looked over at his daughter and saw that she had fingers in her ears and tears running down her face. “And I stopped talking, and I never spoke again about it,” he says.

Lately, though, Gutter travels regularly to inform people about the Holocaust. He’s been to Poland four times in the past year, and regularly accompanies groups visiting Holocaust sites. It takes an emotional and physical toll on him, but he finds it cathartic. He thinks it’s important to show people where hatred can lead.