Some stores are hiring security guards and training staff to watch for suspicious behaviour—a challenge, because, well, there’s no stereotypical meat thief 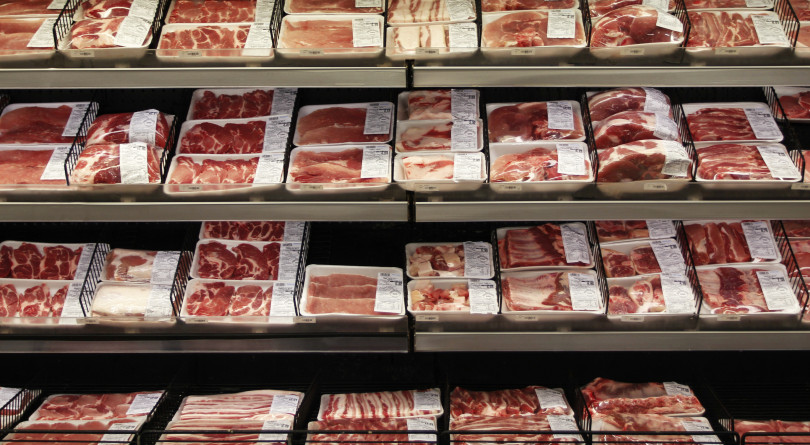 Meat department in a supermarket (Luoman/iStock)

Munther Zeid pages an employee at one of his Winnipeg grocery stores and instructs him to bring the object Zeid keeps hidden on top of an old ice cream freezer to his ofﬁce. A minute later, the young man returns with a metal baseball bat.

“Our friendly weapon,” says Zeid. “I’m not going to allow my store, my staff, to be threatened and lose all that money. I’m not a multi-million-dollar company that can afford stuff like this.”

The problem? A seemingly growing number of brazen thefts targeting meat, as well as cheese, at his ﬁve Food Fare locations. At some of his stores, staff foil as many as eight or nine attempted meat thefts in a day. And he’s not alone: grocery stores across Winnipeg are struggling to deal with shoplifters targeting meat coolers, as well as organized gangs complete with diversionary tactics and getaway drivers. This spring, someone tunnelled through the wall of an east end butcher’s shop—not to empty a vault, but to clean out the sausage counter.

RELATED: Quality wigs are in high demand—and prone to theft

Winnipegger Ed White was at his local Safeway store when he saw his ﬁrst meat heist eight months ago. A man ran out the front door pushing an overflowing cart, but abandoned the meat haul when frustrated customers gave chase. A few months later, White saw the same scene unfold, only this time a van was waiting and the thief escaped.

“Then, a few months later, at the exact same Safeway, I saw three big guys steal a bunch of Safeway roast chickens,” says White. “It was pretty crazy.”

But the stolen meat isn’t being eaten—at least not by the those who steal it. Much of it ends up on the black market, either hawked to local businesses or sold online. Ryan Kochie, an administrator for the Buy/Sell Winnipeg Facebook group, knows the problem all too well.

“It was really bad in our group a year ago, but seems less frequent since we implemented some more monitoring and (began) asking for proof of purchase,” he says. However, those looking to fence stolen meat have hundreds of online options to choose from, including less scrupulous Facebook groups and sites like Kijiji.

READ: The 10 worst cities for hate crime in Canada

Property crime in Winnipeg is on the rise—theft under $5,000 rose 28 per cent over the ﬁve-year average in 2018, and 22 per cent the year before that, according to city police data. Shoplifting, in particular, has spiked: Winnipeg saw a 77 per cent increase last year in the theft of store merchandise under $5,000.

No one tracks how much of that is meat theft, and Zeid notes the phenomenon is not unique to Winnipeg. Still, he says, “it just seems like it’s more out of control here.”

Frank Cormier heads the University of Manitoba’s department of sociology and criminology, and—while he hasn’t studied the problem—suspects the explanation for it could be simple. “There are times where certain kinds of behaviour just kind of catch on,” he says. “Whether they’re legitimate behaviours or recreational things or criminal behaviours, that is a possibility. Someone hears about it being done and they think, well, seems like an interesting way to make a few bucks, maybe I’ll do that.”

Meat is also a soft, untraceable, high-value target. Small electronics are high value as well, but Cormier notes they aren’t sitting in freely accessible coolers. That, however, is beginning to change.

Some Winnipeg grocery stores are engaged in target-hardening, putting high-value products behind counters, hiring security guards and changing store conﬁgurations. Trevor Houston, grocery manager at Sobey’s Cash & Carry in the city’s North End, says his location no longer carries small, easily concealable packages of meat, and closes two hours earlier than it used to on Saturdays to avoid what was a high-theft period. Staff are also trained to watch for suspicious behaviour—a challenge, because there’s no stereotypical meat thief.

As for who buys stolen meat, the answer is people who are short on cash. Illicitly obtained product is generally sold for half the sticker price. With prime rib roast currently retailing for just under $33 a kilogram—up more than 50 per cent from a decade ago—stolen meat can be tempting. Kochie says there is also online support for those fencing stolen goods, and people who report offenders can face a “snitches get stitches” attitude.

Many in the grocery industry question if what’s been called a methamphetamine crisis is contributing to meat theft, but the organized nature of the crimes and subsequent resale cause others to question a causal link between the two. In any event, Cormier says the solution is clear. “Reduce economic inequality in Canada and that will reduce meat theft, I promise.”

This article appears in print in the October 2019 issue of Maclean’s magazine with the headline, “Sins of the flesh.” Subscribe to the monthly print magazine here.