MH17: Could anything have saved that plane? 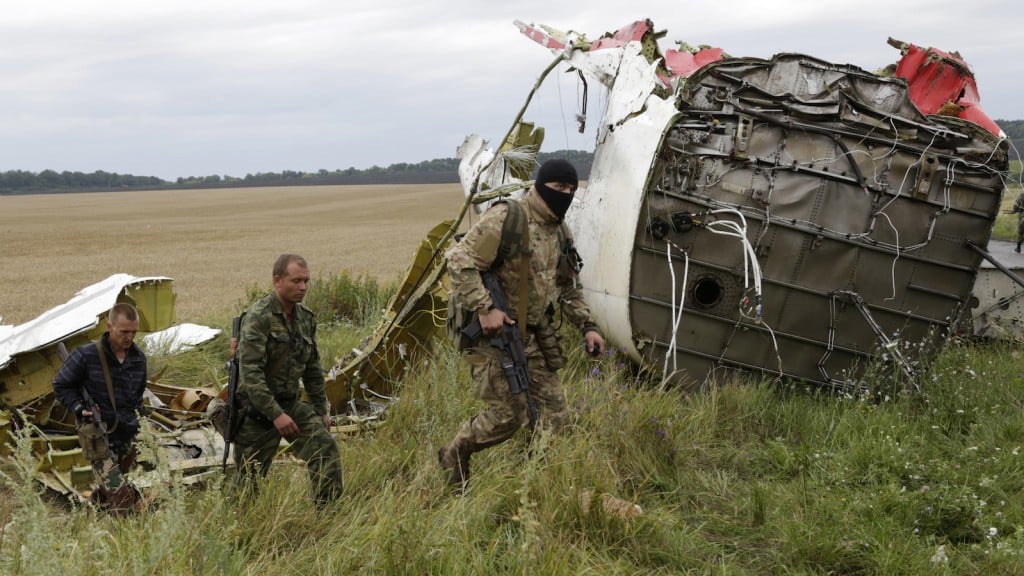 Pro-Russian fighters walk at the site of a crashed Malaysia Airlines passenger plane near the village of Hrabove, Ukraine, eastern Ukraine Friday, July 18, 2014. Rescue workers, policemen and even off-duty coal miners were combing a sprawling area in eastern Ukraine near the Russian border where the Malaysian plane ended up in burning pieces Thursday, killing all aboard. (AP Photo/Dmitry Lovetsky)

As the loss of Malaysia Airlines Flight MH17 made painfully clear, commercial aircraft like the Boeing 777, slow and lumbering, are a poor match for sophisticated military weaponry. Yet, despite an estimated 40 civilian planes that have been hit with ground-based missiles in conflict zones over the past 40 years, causing 28 crashes and some 800 deaths, devising cost-effective systems that will protect them from such attacks remains elusive.

By far, the biggest threat to commercial pilots is from small, shoulder-mounted missile launchers, or MANPADS (man-portable air-defense systems). What these weapons lack in range—most can only hit targets up to an altitude of 15,000 feet—they more than make up for in cost, accessibility and ease of use, making them ideal for terrorists or paramilitary groups. The U.S. State Department has said stopping the proliferation of such systems is a “top national security priority.” (It isn’t just anti-aircraft missiles: This week, several airlines, including Air Canada, temporarily scrapped flights into Tel Aviv after rockets fired from Gaza landed near the airport.)

Given the long-standing security threats in Israel, it’s little surprise, then, that the country’s flag carrier was among the first to adopt anti-missile systems back in 2004. Following an attempted attack on an Israeli charter plane in Kenya, El Al spent about $1 million a plane to equip its fleet with a countermeasure system that automatically detects incoming missiles and fires flares to confuse their infrared tracking. Global shipping giant FedEx has also invested in a laser-based jamming system (designed to thwart a missile’s infrared guidance) for planes flying into more dangerous airports. Both technologies have seen wide use on military aircraft for years.

So why hasn’t the practice become more widespread? A 2005 study by Rand Corp., a defence think tank, estimated it would cost $11 billion to install laser jammers on all commercial airplanes in the U.S., and over $2 billion a year to maintain the systems—a tall order for a perennially cash-strapped industry. Moreover, the report deemed that “well-financed terrorists will likely always be able to devise [an] attack scenario that will defeat whatever countermeasures have been installed,” making the systems unreliable.

Protecting commercial jets from radar-guided systems like the one that shot down Flight MH17 from 33,000 feet represents another magnitude of difficulty. Allen Sens, a professor of international relations at the University of British Columbia, describes the Russian-made Buk missile launcher fingered in the attack as a weapon designed for enforcing no-fly zones during major military operations. And while jet fighters are equipped with countermeasures to defeat such systems—small canisters packed full of reflective metal strips, or chaff, are fired into the missile’s path in an attempt to confuse the on-board radar—they offer little more than a window of opportunity to escape. “They’re just one part of a larger package of defence measures that military aircraft possess, including speed, manoeuvrability and extensive pilot training,” says Sens. None of which describes your average Airbus or Boeing.

Hence, Sens says the best countermeasure for most commercial airlines may be simple common sense: “Don’t fly over territories where there are ongoing hostilities and where you know people are using surface-to-air missiles.”