In Toronto, the potential Democratic presidential candidate also condemned the president's comments on the Huawei case 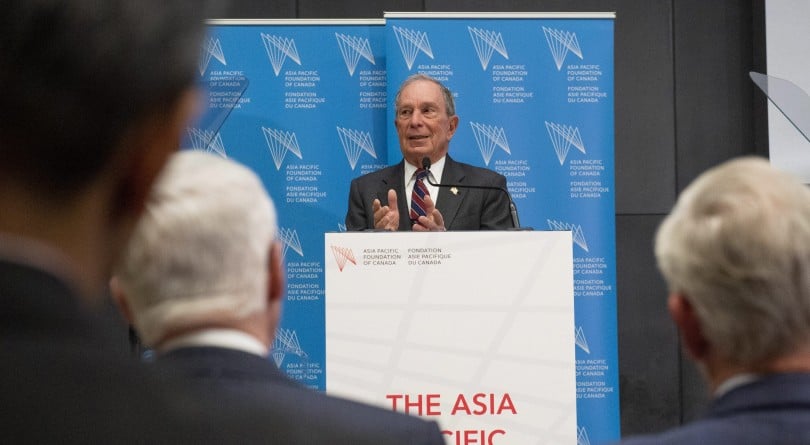 Former New York mayor and possible Democratic presidential candidate Michael Bloomberg wants to repair relations between the U.S. and Canada—but he wouldn’t be patching things up over a joint.

Bloomberg addressed a University of Toronto audience on Tuesday evening at an event hosted by the Asia-Pacific Foundation of Canada.  Asked if Canada made a mistake by legalizing marijuana, Bloomberg said he believes governments should wait until more research has been conducted on the health risks posed by the drug. He said the trend towards cannabis legalization in Canada, the U.S. and elsewhere “doesn’t make any sense at all.”

“To go and encourage people, to make it easier for people to engage in a behaviour that has a significant possibility of damaging people’s health is just nonsensical,” Bloomberg said. “This mad, passionate rush to let everybody do things without any research just isn’t something we would do in any other way.”

Bloomberg was a Democrat for most of his life, before registering as Republican to run for the mayoralty in 2001. He ultimately served three terms. He re-registered as a Democrat in October and plans to make a decision about whether or not to run in the 2020 presidential race in the next couple of months. He said he is motivated by a desire to restore the world’s confidence in the U.S. following damage to its reputation by U.S. President Donald Trump. He said both Democrats and Republicans still value and respect the relationship between Canada and the United States, despite tension over free trade agreements and other issues.

“As an American, I can say, do not mistake the chaos in Washington for the resolve of the American people,” Bloomberg said. “We value our friends and members of both parties recognize we have no closer friends than the people of Canada.”

Bloomberg said he was particularly concerned about Trump’s comments about the U.S. government’s request to extradite Huawei chief financial officer Meng Wanzhou from Canada. The president said he would “certainly intervene” to stay charges against the executive if it would help the Americans secure a trade deal with China. Canadian law enforcement arrested Meng on Dec. 1 at the request of the U.S. on allegations she defrauded banks by falsely claiming the Chinese telecommunications company’s business in Iran did not violate American sanctions.

“It would be an outrage if Washington dropped its extradition request in exchange for China agreeing to resume buying a few more U.S. products,” Bloomberg said. “That is not the way our government has ever conducted business. Treating prisoners like hostages that can be exchanged for cash is what terrorists and dictators do. Not democracies. And certainly not America and Canada.”

Bloomberg said he doesn’t see a point in running for president if he can’t run on a platform that conforms with his values. His priorities include public health, climate change and education.

While some have suggested his age, race and gender might work against him as a nominee for a party trying to demonstrate its relevance to diverse voters, he believes his maturity and experience are valuable assets.

If he runs, the 76-year-old billionaire plans to fund his own campaign to avoid being beholden to anyone.

“My donor is not walking away,” he said. “I can’t think of a better way to spend my money.”