A fellow inmate says the shooter was livid seeing money being raised for the victim, the court hears 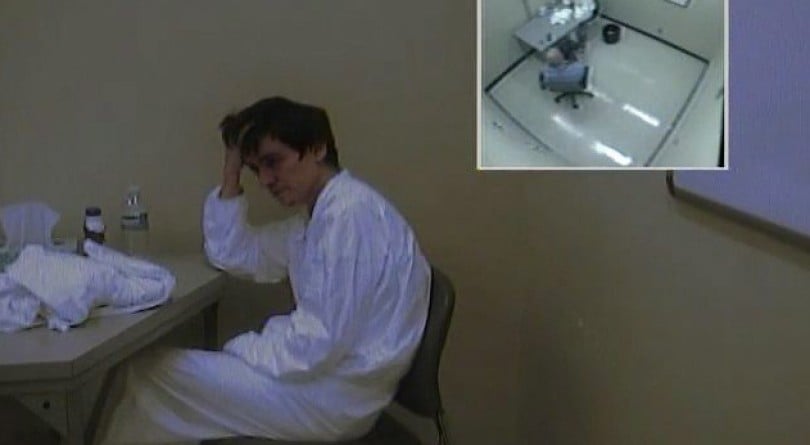 Police interview Alexandre Bissonnette on January 30, 2017, the day after the mosque attacks, in this still from an interrogation video shown by the Crown to the sentencing hearings in Quebec City in this handout photo. THE CANADIAN PRESS/HO - Surete du Quebec

Francois Godin said Bissonnette made the comment when he saw Aymen Derbali on TV.

Derbali lost the use of his legs in the January 2017 murderous rampage and is confined to a wheelchair.

The Crown said the other prisoner told Quebec provincial police this past February that Bissonnette became enraged when he saw a TV report about a campaign to raise funds to buy Derbali a wheelchair-accessible home.

“My parents will have nothing” and Derbali will get a house, Bissonnette reportedly told the inmate.

The Crown did not explain why it did not file the prisoner’s declaration as evidence during Bissonnette’s trial but brought it up Wednesday during the cross-examination of a psychiatrist hired by the defence.

Bissonnette faces up to 150 years in prison

The prisoner’s comments constitute hearsay as he did not testify at the trial, and Superior Court Justice Francois Huot said he will not take into account the exchange when he decides on a sentence for Bissonnette.

Bissonnette, 28, pleaded guilty in March to six charges of first-degree murder and six of attempted murder related to the deadly mosque shooting.

The first-degree murder conviction carries an automatic life sentence with no chance of parole for 25 years.

But Bissonnette can also receive consecutive sentences, which means he could spend up to 150 years in prison.

Judge: Shooter ‘waterworks’ only showed for own family, not victims

Godin mentioned the reported exchange between Bissonnette and the other convict as he cross-examined psychiatrist Marie-Frederique Allard about what he viewed as the killer’s lack of empathy toward his victims.

Even the judge weighed in on the subject, telling Allard that Bissonnette had remained impassive while hearing “blood-chilling” testimony from victims’ loved ones but that he immediately burst into tears when his own family was mentioned.

“Then the waterworks are turned on,” Huot said.

Allard said she believes Bissonnette has made certain progress in terms of showing empathy and that he has the capacity to further develop it.

The defence announced Wednesday it has completed its arguments.

In order to answer the defence’s psychiatric assessment, the Crown asked that Bissonnette meet on Wednesday afternoon with a psychiatrist of his choice. That person may testify Thursday morning.