5 at 5: Mass protest ahead of McDonald's shareholder meeting

Also: Jim Prentice is in and don't mention China 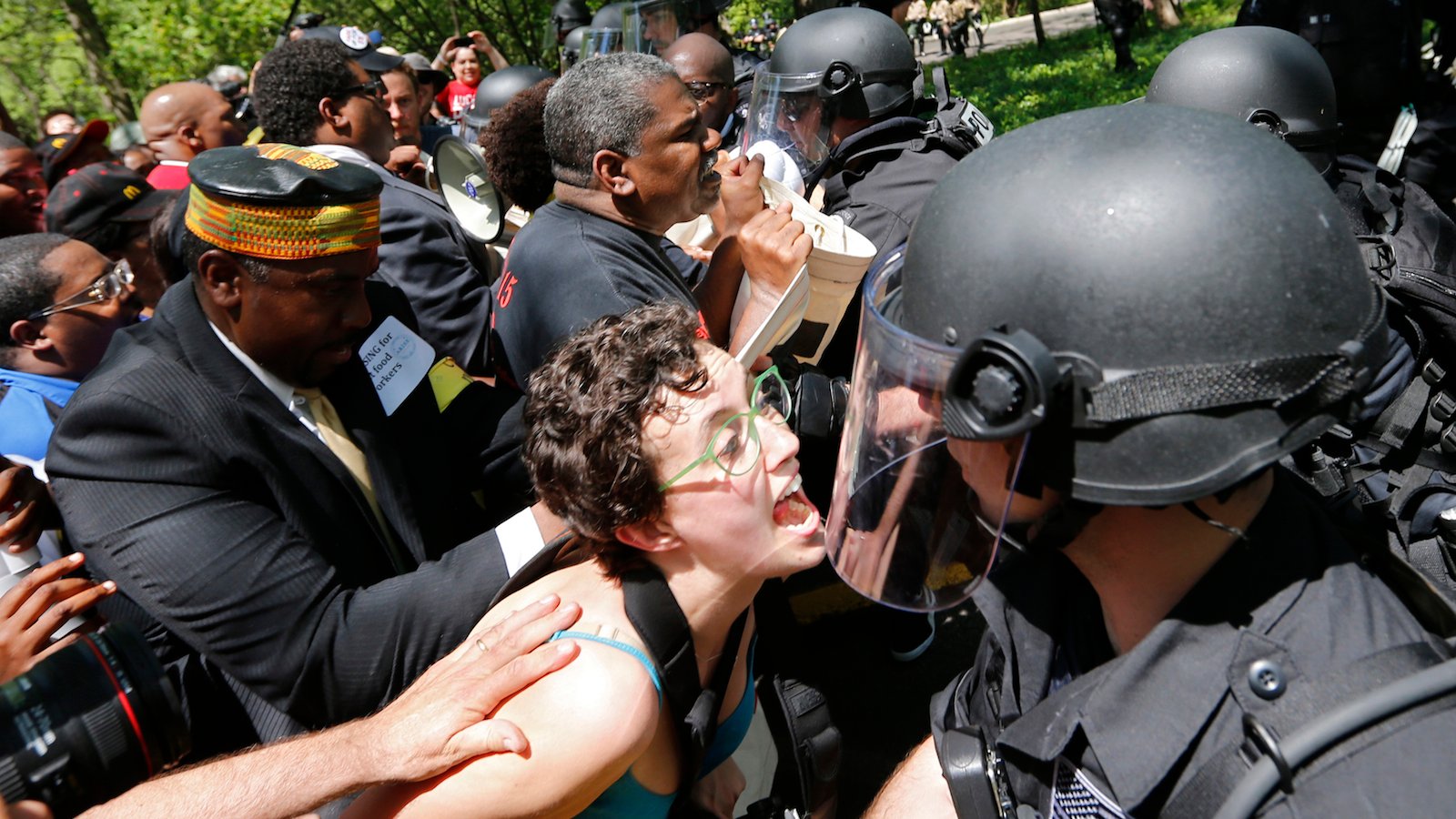 Demonstrators clash with police during a protest at McDonald’s headquarters in Oak Brook, Illinois on May 21, 2014. (Jim Young/Reuters)

McDonald’s employees plan massive protest ahead of shareholders meeting. Employees at the McDonald’s headquarters in Oak Brook, Illinois were told to remain home Wednesday as protesters demanding better working conditions rallied on the day before the company’s annual shareholders meeting. At least 2,000 protesters, some wearing McDonald’s uniforms, stormed the campus entrance in Oak Brook. They are demanding a livable wage of $15 and hour and the right to form a union without retaliation from the company. By Wednesday afternoon, some media outlets were beginning to report mass arrests during the protests.

Jim Prentice is in. The Alberta PC leadership race has its official frontrunner. The former federal cabinet minister from Calgary launched his campaign Wednesday at an event in Edmonton, with a promise to repair “the bond of trust between the people of Alberta and their elected representatives.” The only other candidate officially running is Ric McIver, the province’s former infrastructure minister. Though Prentice is considered the favourite, and already has support from most of the PC caucus, strange things have been known to happen in Alberta PC leadership races. Neither of the province’s last two premiers (Alison Redford and Ed Stelmach) were considered favourites when they launched their bids. The leadership vote takes place Sept. 6.

Whatever you do, don’t mention China. New documents obtained by The Globe and Mail show that the chief of the Communications Security Establishment Canada, the country’s electronic intelligence agency, has been specifically instructed NOT to talk about hacking threats from China, even as reports of Chinese online espionage become more common. According to media lines written for chief John Forster, he is supposed to answer with: “For security reasons, I cannot comment on which countries are targeting Canada,” whenever he is asked about China. If that one doesn’t work, the notes suggest he try the equally obtuse: “I cannot comment on the alleged actions of any specific state or actor.”

Engineer who inspected mall in Elliot Lake, Ont. before its collapse wants advanced access to public inquiry report. Robert Wood—the final engineer who inspected the Algo Centre Mall before it collapsed, killing two people and injuring a dozen others—wants access to a report on the mall collapse before it is made public. Wood faces multiple charges after the mall collapse, including two counts of criminal negligence causing death. Wood’s lawyer is arguing that the report could jeopardize his client’s right to a fair trial. Wood testified at the public inquiry before police had laid charges against him. However, this court filing could also delay the public’s right to the results of the inquiry.

U.S. faces its own controversy over treatment of veterans. Just months after a series of suicides involving current and retired Canadian Forces members drew attention, the American military is facing similar criticism over how it handles the health-care needs of its veterans. Speaking Wednesday, U.S. President Barack Obama addressed allegations that Veteran’s Affairs facilities were covering up overly long wait times for heath care by falsifying reports. The president promised action and said that anyone who has manipulated records will be help accountable.