Letters: 'We can be ongoing parts of a Canadian democracy' 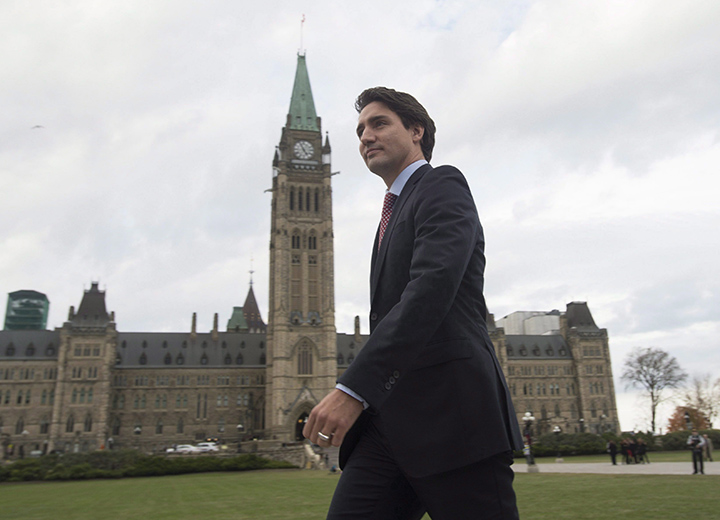 Your Nov. 2 editorial suggests that Trudeau’s win somehow repudiates the argument that he was just not ready. But winning an election tells us nothing about the winner’s ﬁtness to govern. Anyone can climb to the top of the greasy pole, thanks to a talent for self-promotion, connections, a complete lack of principles, or just plain luck—and still be spectacularly unqualified for the position, like the horrible bosses we’ve all had to endure in the course of our working lives. Trudeau seems like a very nice, earnest young man who is genuinely eager to please everyone. This, ironically, could be his unmaking as Prime Minister: In the months and years ahead, he will be bound by honour and temperament to attempt to make good on all those promises he made. He did not account for the practical impossibility of reconciling the conflicting, even contradictory, expectations he will find he has created in making them.

Prime Minister Trudeau has put his finger on a sad weakness of some Canadians: a practice of personalizing politics and imagining opponents to be enemies (“The winner takes it all,” Election 2015, Nov. 2). For 60 years, I have been known and published as a Conservative voice in my community, attacking no one and dealing entirely with policies, never personalities. Yet three consecutive provincial Liberal MPPs would not shake hands with me in public. I once had a neighbour who tore a Conservative mailer into little bits and littered my lawn with them. Here is a friendly challenge: Study the federal Liberals’ platform to identify their good policies (there are several); write your federal Liberal MP, if you have one, and encourage her with your support for any sound Liberal policy. A copy to the local Conservative party president wouldn’t hurt, either. The losers on Oct. 19 needn’t just sulk for four years. We can be ongoing parts of a Canadian democracy, but not by being small and casting neighbours as enemies.

In the Nov. 2 editorial, you claim that “in giving Trudeau a powerful mandate, Canadian voters have said clearly that they want to establish a new, younger and more positive image for Canada, both at home and abroad.” Only 39.5 per cent of voters chose the Liberal party, so a full 60.5 per cent of Canadians likely disagree with your claim. Further, support for the Conservatives dropped by only eight percentage points, which means the increase in the Liberal vote was largely from those who had abandoned them in the 2011 election. That means, in reality, only around 10 per cent of Canadian voters actually voted for change and the rest simply voted the way they always have. I would hardly call that a powerful mandate, and sincerely hope Trudeau doesn’t forget it. In addition, Trudeau’s claim that he plans to be “a Prime Minister for all Canadians” seems like a wonderful rallying cry, but it’s very misleading. How can he be a Prime Minister to all, when he won’t allow those who are openly pro-life to run for the Liberal party?

We voted for a shift of tone and substance in Ottawa, but democracy doesn’t stop there. Not only do we as citizens have freedom to participate in the political life of our country, as Eleanor Roosevelt wrote, “with freedom comes responsibility.” It was uplifting to hear that great numbers, particularly young people, voted last month to return to a level of civility that many of us have been missing lately. Democracy doesn’t start and end on election day. We have the right to differ, but we can gain so much if we find and build on those things on which we do agree. Instead of just hurling insults at our neighbours who disagree with us, is it too much to expect that we consider the differences and delight in the privilege of being able to openly have them? Yes, vigorously fight for that idea that needs defending—but then punch the clock and express respect for our opponent. What better way to fulﬁll our responsibility and honour those who gave us these freedoms?

Canada’s Conservatives would do well to examine carefully the experience of their U.K. colleagues (“The Tories’ heart and soul,” Election 2015, Nov. 2). In 1997, the Labour Party under Tony Blair won a landslide victory over the U.K. Conservative Party, the latter still deeply overshadowed by the divisive legacy of Maggie Thatcher. It took 10 years and three elections before the Conservatives returned to power, and only then via a coalition with the Liberal Democrats. Theresa May, chair of Britain’s Conservative Party in 2002, famously declared, “There’s a lot we need to do in this party of ours. Our base is too narrow and so, occasionally, are our sympathies. You know what some people call us: the Nasty Party.” Stephen Harper’s legacy, his xenophobic campaign against Muslims, his emphasis on attack ads and his jump into bed with the Ford brothers, played only to his base and was rejected by more than two-thirds of Canadian voters. Theresa May’s warning is all too germane to the future of the Conservative Party of Canada.

All sides of the story

I was quite ready to vote NDP because I didn’t think Trudeau was ready, and I got tired of Harper after voting for him the last 10 years (“The winner takes it all,” Election 2015, Nov. 2). My local NDP candidate worked extremely hard to get my vote. I watched the Maclean’s debate and, right off the bat, Mulcair struck me as weak, while Trudeau was surprisingly strong and composed. Mulcair said he would abolish the Senate, yet everyone knows the provinces would never have agreed. When Harper signed the Trans-Pacific Partnership trade deal, Trudeau said he would look at it when he was PM; Mulcair said he would tear the agreement to shreds. He said it like a mischievous little boy back-talking to his parents. Trudeau didn’t slam the door on all Conservative motions, because they were not all as bad as Mulcair made them out to be. I voted Liberal.

I’m not sure if PM Trudeau doesn’t know his history or just wants to alienate the electorate of Alberta and Saskatchewan right from the start of his new mandate, by quoting Wilfrid Laurier. It was Laurier, during his third term in office, who would not give Alberta and Saskatchewan, which were created in 1905, the same rights over natural resources as other provinces. It was sunny, sunny days for the rest of Canada, particularly Ontario and Quebec. Let’s hope Justin is better than his father, whose focus on Quebec and outright arrogance toward Western Canada just about destroyed our country. I see little real change with this election: another PM from Quebec, with central Canada politically controlling the country.

Although I am a card-carrying Conservative, I did not care for the party’s advertising saying Justin Trudeau was “just not ready,” since it would tend to be self-defeating after several weeks of campaigning. Regardless, when I saw Trudeau on television addressing the Dan Gagnier scandal, he was humming and hawing and seemed almost stunned. My reaction was: By God, it’s true! He really isn’t ready.

Maclean’s Election 2015 coverage was a disappointment. So many articles were so demonstratively demeaning to our new Prime Minister. There was this bizarre, snarky, falsely superior, caustic reticence to recognize Justin Trudeau’s great electoral achievement, as well as his victorious determination to win Canada’s democracy back for all Canadians.

The use of terms such as, “thuggish,” “jacked-up politics of division,” “Islamophobia,” “prejudice” and “bigotry” in your Election 2015 stories uses name-calling to cover up real discussion of issues. Even when talking about Ezra Levant, you call him “Canada’s own [Rush] Limbaugh,” as though that is all that has to be said about any arguments he might have. These terms reinforce the idea that there might be a liberal bias in the media. The media would not have thought to call Trudeau’s pro-abortion views “Catholicophobia,” so why use those types of terms at all? Thankfully, Paul Wells has been one of the members of the media who has attempted to keep a neutral, professional stance when dealing with political parties.

Wow, this election must have cost the Conservatives bazillions of dollars. Imagine my surprise on Saturday, Oct. 24, when I received a phone call from the Conservative Party of Canada telling me about the forthcoming Armageddon the newly elected Justin Trudeau is gleefully bringing upon us. I was then thanked for my ongoing support of the Conservative party—which I have never supported. I asked this caller how she knew for whom I voted. She skipped over that inquiry and promptly asked me to donate $200 to the party as my contribution to save Canada from the horrors of Justin. I am on a pension and have no intentions of giving any more of it away to pay for Mike Duffy’s. I told this woman she may want to place a call for donations to the Conservatives BFFs, Tweedledee and Tweedledum, a.k.a. the Ford brothers of Toronto, with whom the Conservatives are so chummy. Shame on the Conservatives for phoning Canadians less than a week after the election, asking for yet more money.