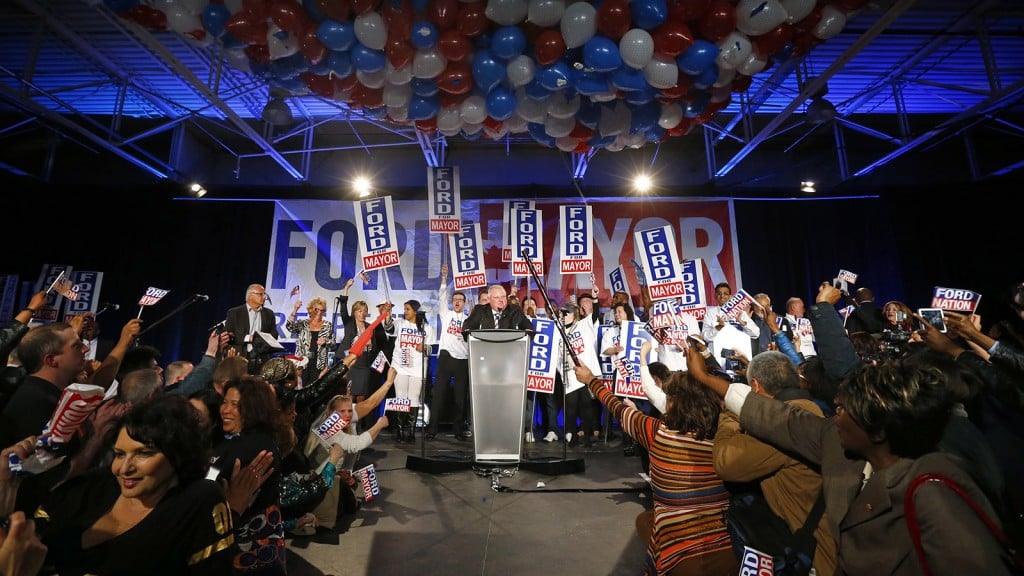 1. Rob Ford is out, sort of, and Doug Ford is in. Toronto’s mayor dropped out of the city’s mayoral race hours before the deadline to remove his own name from the October ballot. With minutes to go before 2 p.m., the election dynamic spun on its head. Doug entered the race for chief magistrate, Rob entered the race for his old council seat in Ward 2 (Doug’s current digs), and the up-and-coming Michael Ford withdrew from the same council race and registered for the closest competition for school trustee. Only two people in the world saw this coming: Nick Kouvalis and Bob Rae. Bravo, gents.

2. The NFL’s reputation lies in tatters. Before this afternoon, Minnesota Vikings running back Adrian Peterson was known as a gifted super-athlete who never saw a record he couldn’t break. Now, he’s an alleged child abuser, having been accused by police in Montgomery County, Texas, of beating his son with a switch—a tree branch sometimes used to strike children. Peterson’s indictment comes days after Ray Rice, a running back formerly with the Baltimore Ravens, commenced his indefinite suspension from the National Football League after video emerged showing him viciously punching his fiancée in an elevator.

3. CBC executives muse about user fees. Hubert Lacroix, the public broadcaster’s president, didn’t suggest how much viewers could, should or would pay to access CBC television—but he said the current business model is broken and something should change. Lacroix broached the issue at hearings hosted by the Canadian Radio-television and Telecommunications Commission. The CBC also wants local programming available by subscription only. Tom Pentefountas, the CRTC’s vice chair for broadcasting, warned that the plan would, collectively, cost consumers and carriers hundreds of millions of dollars.

4. Malala’s suspected shooters are arrested. Ten Taliban fighters are in custody after a joint military operation captured them almost two years after they allegedly shot Malala Yousafzai in the head and neck—an attack she barely survived—in October 2012, after she’d lobbied in favour of girls’ education.

5. John Kerry wants Turkey to fight ISIS. The largely Islamic country sandwiched between southern Europe and flashpoints of conflict in the Middle East has so far refused to join an international coalition bent on wiping out the ISIS militants that have terrorized parts of Syria and Iraq. Part of that reluctance may be connected to ISIS’s capture of 49 Turkish nationals in June. Kerry, the U.S. Secretary of State, met with Turkish President Recep Tayyip Erdogan for two hours. They emerged with a statement that’s predictably vague, under the circumstances: “The two countries will continue to fight against the terrorist organisations in the regions.”