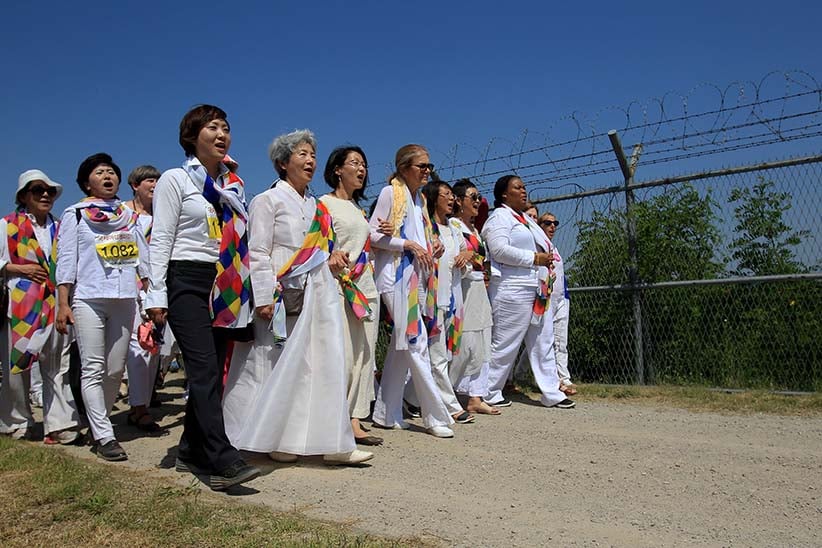 Walking in white: Female activists, including (centre) Gloria Steinem, cross the border between North and South Korea, calling for peace and dialogue

With 17 words inserted into its constitution (“Marriage may be contracted in accordance with law by two persons without distinction as to their sex”), Ireland became the first country in the world to legalize same-sex marriage by referendum. The first such marriages may happen by September, as Justice Minister Frances Fitzgerald pledged to fast-track the marriage bill. It was a remarkably civil debate for a country rooted in Catholicism. In a reflective analysis, the Vatican newspaper L’Osservatore Romano said the “defeat” highlights “the distance in some areas between society and the Church.”

Bad news: A problem of its own making

Air Canada has started its clampdown on oversized carry-on luggage. Staff at Toronto’s Pearson airport began inspecting luggage this week, relegating larger pieces to the hold, for a fee, while red-tagging acceptable bags. The practice should stop the boarding nightmare of passengers trying to jam piano-sized bags into overhead bins. Of course, that problem was created by airlines cranking up fees on checked bags. Solving the problem will net Air Canada a further bonanza of baggage revenue.

If one more person had voted in the Prince Edward Island riding of Vernon River-Stratford, it wouldn’t have been left to God—or a coin toss—to decide the winner. A recount of the May 4 election results left Liberal incumbent Alan McIsaac and Progressive Conservative Mary Ellen McInnis in a tie. Under Island law, ties are resolved by a coin toss. “I put it in the Lord’s hands,” said McIsaac, who won with tails. “I guess He’s asking me to continue.” A perfectly logical way to settle the matter.

Bad news: Tanks on the tundra

It may be time to equip the Canadian Rangers who patrol Canada’s Arctic with something more than rifles. Russia’s hawkish Deputy Prime Minister Dmitry Rogozin has signalled his desire to annex vast reaches of the mineral-rich North. He was asked if the U.S. and Europe were worried about Russia’s growing Arctic presence. “I’ve always joked about it,” he told state television. “So what if they won’t give us visas? . . . Tanks don’t need visas.” NATO and its partners are conducting air training in the Arctic. Russia countered with a four-day “surprise inspection” involving more than 250 aircraft and 12,000 personnel. 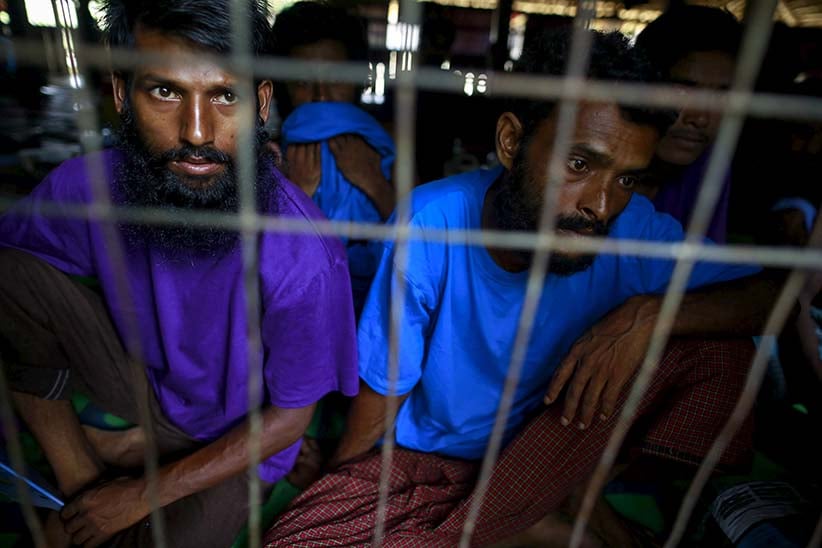 Not wanted on the voyage: Rohingya Muslims are held at a temporary refugee camp in Myanmar after they were abandoned at sea by Thai traffickers

Facebook Canada will start sending amber alerts about missing children to users near the disappearances, a recognition of social media’s role as an early-warning system. It follows a similar move by Facebook in the U.S. The initiative may help to counter the ugly side of social media, on display last week as U.S. President Barack Obama made a Twitter debut with his @POTUS account. Racist trolls took the shine off thousands of positive tweets with offensive slurs, even portraying him with a noose around his neck.

Bad news: The auto industry drives some away

Some 34 million cars are being recalled in the U.S. after Japanese auto-parts supplier Takata admitted that its airbag inflators, used by 11 different automakers, were faulty. At least six people have died worldwide after the bags exploded with excessive force. (There have been no reported incidents in Canada.) General Motors, meanwhile, may face criminal charges over an ignition-switch defect linked to more than 100 deaths. It could be hit with a fine of more than $1 billion and charges against individuals due to misleading statements about the problem. Cars are safer than ever, but this may be a good week to put away the keys and take a walk.

The New Brunswick Court of Appeal has loosened the cross-border control the Federation of Quebec Maple Syrup Producers exerts on its product. Étienne St-Pierre, owner of a New Brunswick-based syrup-processing company, has waged a sticky eight-year legal battle over the federation’s attempts to impose its marketing-board quotas and tariffs on the bulk Quebec syrup he imports for his company in Kedgwick, N.B. The New Brunswick court quashed an injunction against St-Pierre, saying the Quebec marketing board has no jurisdiction outside the province. Federation lawyers are waffling over their next move.

Bad news: Keep your eyes on the fries

The Canadian Food Inspection Agency has issued an advisory against suspected food tampering after consumers in all Atlantic provinces reported finding nails and needles inserted in their potatoes. The RCMP have launched a criminal investigation. Loblaw Companies and Strang’s Produce are voluntarily recalling certain brands of russet potatoes. There are no reports of injuries, but the spud’s reputation as a comfort food has taken a hit.

FILED UNDER: Air Canada Editor's Picks facebook Ireland The World As We See It