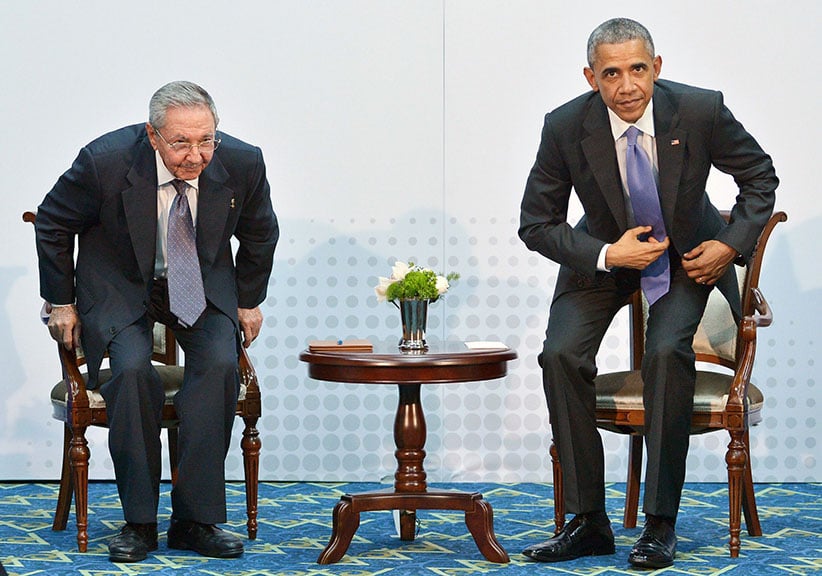 Thawing out: Cuban President Raúl Castro and U.S. President Barack Obama meet at the Summit of the Americas in Panama City on April 11
Mandel Ngan/AFP/Getty Images

A simple handshake with Cuban President Raúl Castro was enough to land U.S. President Barack Obama on the front pages of newspapers around the world, marking the first bilateral meeting between the two nations’ leaders in more than 50 years. But Obama was careful to stress that efforts to thaw relations with communist Cuba won’t stop him from pressuring Castro to respect human rights and freedom of the press, among other things. Prime Minister Stephen Harper also had a historic sit-down meeting with Castro at the Summit of the Americas—only he neglected to invite Canadian journalists to witness it.

It’s not clear which is more troubling: the 2,700 litres of bunker fuel that spilled into Vancouver’s picturesque English Bay, or that officials can’t decide whether their response was a success or a failure. The Coast Guard was “enormously pleased” that oil from the bulk freighter Marathassa was mostly recovered in three days, but Vancouver Mayor Gregor Robertson and B.C. Premier Christy Clark both expressed disappointment at how long it took to notify the city and put booms in place. As shipping increases off the B.C. coast, it’s imperative that all government departments be on the same page—starting with knowing what, exactly, a “world-class” oil-spill response entails.

Ontario has become the latest province to recognize that pricing carbon is the best way to reduce greenhouse gases. The scheme, already adopted by Quebec, gives companies the option of buying credits from others that beat their targets. Although critics will debate the merits of cap-and-trade vs. a straight-up carbon tax, such as the one B.C. adopted, the point is that Ontario is introducing a measure of market discipline into an extraordinarily difficult problem. More important, it’s not waiting around for a “national strategy” on climate change that, judging by the perpetual foot-dragging in Ottawa, will likely never come.

Some lucky homeowners in Europe are getting help paying down their mortgages from an unlikely source: their local bank. At least one Spanish financial institution has been forced to deduct small amounts off borrowers’ principals each month as interest rates drift below zero, the result of central-bank efforts to boost the flagging European economy. It’s yet another example of how the 2008 financial crisis is still turning the world of economics upside-down.

Sad sight: Residents try to save some of the 156 melon-headed dolphins that beached themselves on the coast of Hokota, Japan, northeast of Tokyo
Kyodo/Reuters

Astronauts aboard the International Space Station will get a major upgrade to their mornings (which, technically, occur roughly every 90 minutes): a new micro-gravity espresso machine, courtesy of the Italian coffee maker Lavazza and the country’s space agency. Meanwhile, data collected by NASA’s Curiosity rover suggests that Mars’s salty soil is capable of harbouring briny liquid water just below the surface. It’s not enough to sustain life but, like sipping a cappuccino in orbit, it makes space seem just a bit more hospitable, all the same.

Bad news: Too clever by half

Many are calling a 17-year-old German schoolboy ingenious for filing a freedom of information request in a bid to see the questions in a state-wide exam. But cheering such a blatant effort to cheat doesn’t say much for the state of education in Germany, or elsewhere. Moreover, the fact that Simon Schrader’s exam was scheduled for April 16, five days before the government is required to give him a response, suggests he may not be nearly as bright as some have made him out to be.

The Supreme Court of Canada struck down mandatory minimum sentences for crimes involving prohibited guns, arguing that the law is too broad and could jail people who simply inherited a firearm but did not immediately license it. The court also cited a lack of evidence that mandatory sentences have a deterrent effect on gun crimes. It’s a sensible decision: At the end of the day, it’s judges who should properly determine whether sentences are proportional to the crimes.

A giant “blob” of warm water in the Pacific, stretching about 1,600 km in all directions, is being blamed for California’s record drought and unseasonably warm temperatures along the West Coast. The phenomenon’s roots—an El Niño-type effect—may also be contributing to harsher than usual winters in the U.S. northeast. While there’s no direct evidence that warming water, first noticed back in 2013, is tied to climate change, scientists say it is the sort of weird weather effect that will become increasingly common amid warming global temperatures. So grab your sunblock. And your toque.