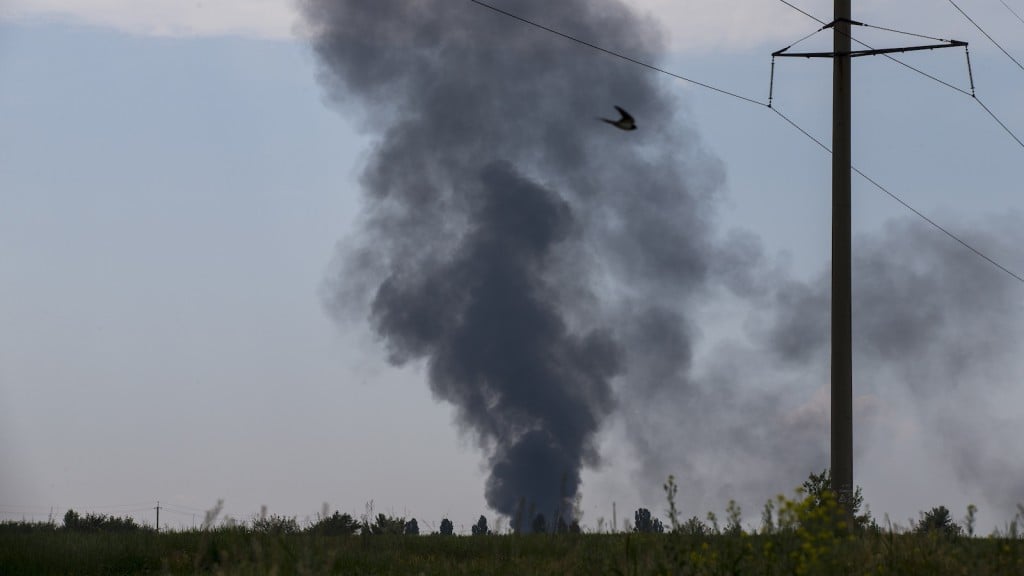 1. Rebels shoot down a Ukrainian helicopter. Fourteen Ukrainian soldiers reportedly died when pro-Russian forces shot down the chopper near the eastern city of Slovyansk. Kyiv says Serhiy Kulchytskiy, the National Guard’s head of combat and special training, lay among the dead. Petro Poroshenko’s election as president on May 25 did little to quell anti-Kyiv fervour in the country’s eastern regions. Rebels in Slovyansk continue to hold hostage four members of the Organization for Security and Co-operation in Europe.

2. James Moore takes on internal trade. The industry minister knows the frustrating, protracted fight to lower interprovincial trade barriers won’t be easy, but he told the National Post‘s John Ivison that provincial governments are uncommonly aligned as pro-business and eager to dissolve barriers—even in Manitoba, where Moore called the NDP’s jobs minister, Theresa Oswald, “forward-looking, enthusiastic and engaged.” Ivison remains cautious: “This is a problem as old as the Confederation itself and is not likely to be solved just because any one politician wishes it to be so,” he writes. Good luck, Mr. Moore.

3. Nigeria declares a war on terror. Boko Haram’s continued ravaging of villages in northeastern Nigeria (and occasionally elsewhere in the country) has President Goodluck Jonathan vowing to destroy the radical Islamist group. Jonathan sounded eerily reminiscent of American leaders after the 9/11 attacks: “I am determined to protect our democracy, our national unity and our political stability, by waging a total war against terrorism,” he said. “It will not happen overnight, but we will spare no effort to achieve this goal.” Meanwhile, Boko Haram continues to hold hundreds of girls captive.

4. Brian Mulroney takes charge at Quebecor. The staunchly federalist former prime minister, now 75 years old, will be named chairman of the board next month. Mulroney and his new vice-chair, as well as a new CEO, are all federalists who hope to build relationships with Ottawa’s governing Conservatives. The trio’s leadership marks a shift from Pierre Karl Péladeau, Quebecor’s former CEO, who emerged as a committed sovereigntist during Quebec’s provincial election—and is now a leading contender to replace former premier Pauline Marois as Parti Québécois leader.

5. Sisi wins in Egypt. A national holiday and an extra day of voting boosted turnout in Egypt’s election to a paltry 46 per cent, not exactly a stunning show of democratic fervour in a country that saw its last elected president ousted in a coup. Abdul Fattah al-Sisi, the ex-military chief who led the coup against Mohamed Morsi, took an overwhelming 93 per cent of the vote—crushing his only challenger, the left-wing Hamdeen Sabahi, who didn’t attract even a million votes.