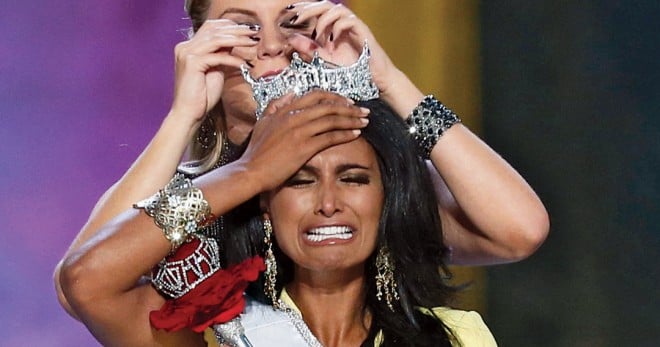 Shaped by her education

You might say Leilani Franco’s three-year experience at the Montreal-based National Theatre School left her a bit twisted. But then she did aspire to be a contortionist. The skill has served her well since returning to her home in London, England. Her feats, including serving tea with her toes, allowed her to reach the semifinals of both Britain’s Got Talent and Germany’s Das Supertalent. She’s also worked with Cirque du Soleil. Now she’s contorted herself into one of her favourite publications, Guinness World Records, giving her the “funniest, strangest feeling,” she says. Franco achieved three records: 25 full-body revolutions in a minute while maintaining a chest stand; the fastest human back-bend walk (20 m in 10.5 seconds); and the fastest 20 m in a contortion roll (17.47 seconds). Suffice to say attempting any of those moves would land most mortals in traction.

Newly crowned Miss America Nina Davuluri, 24, was born in Fayetteville, N.Y., the daughter of a gynecologist with plans to become a doctor herself. But that didn’t prevent online haters from labelling the first Miss America of Indian heritage as everything from a “foreign terrorist” to “Miss 7-Eleven.” One Fox News commentator tweeted that the crown should have gone to someone with more “American values.” Davuluri, who performed a Bollywood-style dance during the pageant, appeared unfazed by the racial backlash, telling reporters, “I’m thankful there are children watching at home who can finally relate to a new Miss America.”

With three self-titled television series to his credit, you could be forgiven for thinking Bob Newhart is an Emmy Awards favourite. Yet the 84-year-old actor had to wait until this week, after more than 50 years in show business, to snag his first-ever statuette—for, of all things, a spot on the middling CBS sitcom The Big Bang Theory. “This is my seventh shot at this . . . I just love this very much,” a teary Newhart said upon accepting his award for outstanding guest actor in a comedy series. After six previous nominations went nowhere, Newhart, who starred in such iconic series as The Bob Newhart Show in the 1970s and Newhart in the ’80s, stopped submitting his name for consideration. “I didn’t want to go through the process, the disappointment,” he told the Associated Press. Newhart may have to make space on his mantle, though, as he’ll return to The Big Bang Theory later this season.

Some air carriers, including Scandinavian Airlines, are so respectful of their customers’ superstitions they don’t have a seat row 13. And then there are the plucky pilots of Finnair who scoff at such nonsense. They and their passengers thought nothing of taking Flight 666 from Copenhagen to HEL on Friday the 13th. That’s scary on many levels: not only the day, but 666 being the mark of the devil and HEL (the airport designator for Helsinki) just one consonant short of eternal damnation. “I’m not a superstitious man,” said the pilot, Juha-Pekka Keidasto. “It’s only a coincidence for me.” The nearly full Airbus A320 arrived safely, and three minutes early to boot. That’s a better outcome than U.S. adventurer Jonathan Trappe, who set off from Maine last week, dangling in a lifeboat under 400 helium balloons he hoped would carry him across the Atlantic. He made it 12 hours before landing in a Newfoundland forest, citing control problems. He spent the 13th hiking out of the woods.

Why is the QB packing heat?

Things have been getting a tad unruly at Seattle Seahawks games for fans wearing opposing team colours. With that in mind the Seattle team president Peter McLoughlin has deployed armed undercover police officers in the stands wearing opposing team apparel. It started last Sunday with the officers kitting out in hated San Francisco 49ers gear. One might think the guns would be a giveaway, but this being the U.S., maybe not. “We have great fans,” McLoughlin said. “Our goal is to ensure a safe environment for all in attendance, including visiting team fans.”

Outstanding in their fields

Canadians, shrews and cows were well-represented at the annual Ig Nobel prizes awarded at Harvard University for seriously silly science. Fritha Langford of Canada was part of a British team that won the “probability prize” for discovering: a) the longer a cow has been lying down, the more likely it is that it will soon stand up and, b) once a cow stands it’s hard to predict when it will lie down. The “fluid dynamics prize” went to a team including Rouslan Krechetnikov of the U.S., Russia and Canada for studying the sloshing motion made inside a coffee cup when people walk. The archeology prize went to American Brian Crandall and Peter Stahl of Canada for swallowing whole a parboiled shrew, then examining what the researchers excreted to see which bones dissolved en route.

Tina Brown, the departing editor of the Daily Beast website, is taking heat from the New York Post for the priorities of her charity Women in the World. It reported that a “plurality” of the $1.17 million raised in 2011 meant to drive “solutions to advance women and girls” went instead to “throwing lavish gatherings for its director and her connected friends.” Expenses consumed almost $537,000 of the money raised. Just $10,000 went to support the work of Nobel Peace Prize winner Leymah Gbowee, whose movement helped end the Liberian civil war. Brown’s charity has yet to file its 2012 return. A spokesperson said the charity has now disbursed more than $1.1 million in grants. Coincidently, or not, Fox News reports it donated $650,000 to Vital Voices, a women’s leadership charity founded by former secretaries of state Hillary Clinton and Madeleine Albright. The gift was made Sept. 12, hours before the Post published its story.

Thomas Bach of Germany, the newly elected head of the International Olympic Committee and a past gold medallist in fencing, showed he still has the moves as he bobbed and weaved on the issue of Russia’s ban on gay “propaganda.” Pressed by the BBC on Russian President Vladimir Putin’s uncompromising stance on the issue, Bach said the IOC “is not a supranational parliament of government and our responsibility is respect for the Olympic values in the Olympic Games and its participants and, by respecting the values in the Games, sending a message to society at large.” He did promise the IOC will “devise a strategy that will deal with the issue in more detail and this we will do in the next couple of weeks or months.”

A thirst for the Cup goes unquenched

Canada’s historic run at the Davis Cup final in tennis ended with the sound of Vasek Pospisil’s ankle popping as he dove to hit a volley in the final point of the deciding match against Janko Tipsarevic on Sunday, giving Serbia a 3-2 win. Until then, the 23-year-old Vernon, B.C., native, alongside Milos Raonic and tennis veteran Daniel Nestor, represented the country’s best chance at winning the international tournament, having managed surprise victories over Spain and Italy to move Canada into the semifinals for the first time in a century. “Hopefully they’ll have to deal with us a lot in the future,” Pospisil, nursing a swollen ankle, told a post-game press conference.

Pope Francis has a new, well, old, ride—one that suits his frugal style. He now has a 1984 Renault 4L economy car—quite a step down from the typical Popemobile—for tooling around Vatican City. It is a gift from Father Renzo Zocca, a 70-year-old priest from Northern Italy, who put 300,000 km on the odometer. Zocca was inspired to make the symbolic gift after the Pontiff appealed to priests not to drive expensive cars but to save that money to give to the poor. The Pope told Zocca he is well acquainted with the Renault 4 since he had one in Argentina. Then he took it out for a spin.