An emergency alert indicating a problem at Pickering's nuclear plant was a false alarm, but a big wake up call to many in its vicinity. What would happen in the event of a real nuclear mishap? 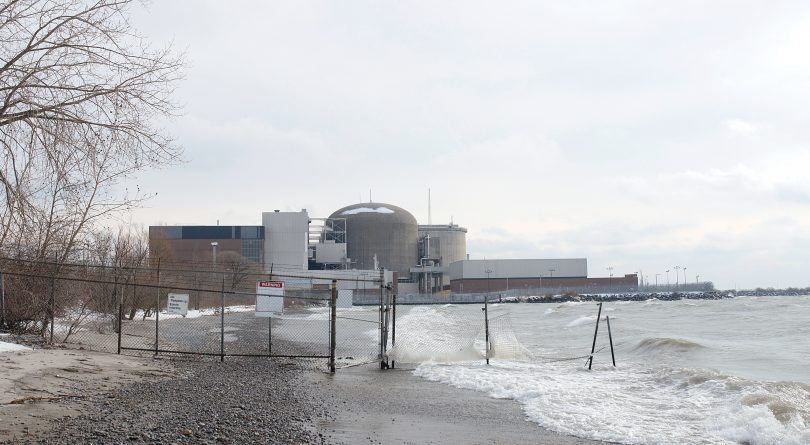 A view of the Pickering Nuclear Generating Station from Beachfront Park in Pickering. (Photograph by Stephanie Foden)

A café owner and innkeeper who live right beside the nuclear plant in Pickering, Ont., exude calm as they recall the mistaken emergency alert that briefly panicked—and more likely confused—residents in a suburb that’s been home to an atomic power facility for nearly 50 years.

Brad Smith runs the Nautical Village Inn near the foot of Liverpool Road, and Michele Peters owns the Open Studio Art Café just down the street. They’re both within view of the Pickering Nuclear Generating Station, which looms large over the community.

On the morning of Jan. 12, an alert from the province buzzed onto cellphones and mistakenly told residents within 10 km of the plant that an “incident” had been reported but that they faced no immediate danger. Smith didn’t see the alert until it had already been cancelled.

Peters slept through the alert, too, and admits a certain complacency has crept into her life in the shadow of nuclear reactors that could, in a worst-case scenario, force her to evacuate. But a conversation with Smith and Peters at the café soon drifts to a condo proposal that could bring more people, and traffic, to their picturesque nook on the shore of Lake Ontario. The plant becomes a bit of an afterthought. “Most people moved here knowing it was there,” says Smith.

For others, though, the errant alert was an awakening—in more ways than one. It went out at 7:23 a.m. EST on a Sunday, due to a mistake at the province’s emergency operations centre, and was rescinded about 40 minutes later. Over the next two days, a nuclear-safety website received more than 32,000 orders for potassium iodide pills, which help prevent thyroid cancer after exposure to radioactive iodine. Tens of thousands more ordered the pills within a week, which are free to anyone who lives within 50 km of a nuclear plant. The opposing reactions—a run on pills versus the blissful nonchalance of people living next door to the plant—seemed a symbolic dichotomy in a city where the spectre of a nuclear mishap is more than academic. Millions of people live within an hour’s drive of the potential epicentre. How would they react in a real emergency?

Pickering Mayor Dave Ryan and his deputy fire chief, Stephen Boyd, know their plan by heart. They’ve seen the simulations and believe their roads have the capacity to safely evacuate whoever needs to leave in the remote event of an accident. They emphasize that any radioactive leak is contained within the plant for 48 hours by vacuum systems that convert radioactive steam to liquid. That valuable time, they say, allows for an orderly exodus from the city. The plan is to reverse all of Highway 401’s westbound lanes to Toronto, which produces a 16-lane superhighway to safety in the outer suburbs. A 2016 study produced a “worst-case evacuation time estimate” of eight hours and 40 minutes.

The province can also “geo-fence” alerts to residents, spamming landlines and cellphones with specific instructions. They even have air raid-style emergency sirens, which locals hear once a year during scheduled tests, to alert those within three kilometres of the generating station that something’s awry.

Boyd mentioned a hyper-awareness of any activity at the plant. The deputy fire chief says he’s alerted to the tiniest changes—he estimates about five emails a day—even when something like a sprinkler head is replaced.

Ian Fairlie, a consultant on environmental radioactivity, isn’t so sanguine. The Clean Air Alliance, an anti-nuclear non-profit that promotes other forms of green energy, asked Fairlie to predict the effects of a Fukushima-level nuclear disaster in the GTA. He painted an alarming picture: 26,000 cancer cases over several years, vast tracts of suburbia uninhabitable for a century that would leave hundreds of thousands homeless. Maps that superimpose Fukushima-level fallout on southern Ontario show high doses stretching past Hamilton and Kitchener. “We conclude that the continued operation of the Pickering NGS creates a ‘hostage to fortune’ situation for everyone in Ontario,” Fairlie wrote in 2018.

Paul White lives within view of the nuclear plant, just across Frenchman’s Bay in a cottage-style home surrounded by a new development. A public health inspector by trade, White moved to the area the very year the facility opened, in 1971. He trusts the experts who keep the community safe. “There’s a leap of good faith,” he says. White predicts that overburdened streets may be clogged by panicked evacuees in the event of an accident, but it doesn’t worry him much: “There are things in life you can control, and things that are outside your control.”

Nerves over a radioactive nightmare certainly haven’t stopped people from moving to Pickering. A Royal LePage report last October called the city the hottest housing market in the GTA, crediting the growth to a new casino and a plethora of post-secondary options. Mayor Ryan says the city’s crest may include a stylized atom, but the nearly 100,000 residents don’t define themselves by the presence of the aging facility. “There’s a healthy concern in the general population,” says Ryan. “But people who operate the plant live next to the plant. They’re not going to do that if they have a concern.”

The reactors will shut down someday, ending any possible threat, but the Ontario government just extended the life of Pickering’s nuclear plant another five years. So the province’s foul-up might have been helpful in the end. It reminded everyone who’d forgotten how their lights stay on that they can thank those aging radioactive cauldrons brewing electric power down by Lake Ontario, on the edge of Canada’s biggest city and most populous region. Also: Maybe they should keep those iodide pills where they can see them.

This article appears in print in the March 2020 issue of Maclean’s magazine with the headline, “A powerful wake-up call.” Subscribe to the monthly print magazine here.